The game of baseball has many traditions that have lasted for years. Coaches wear uniforms, the national anthem is sung before the game, hotdogs are a delicacy, and there are many presidents that are known to be fans of the sport. There's even an unwritten rulebook for professional baseball.

President William Howard Taft has gone down in history for being a...large man (he wouldn't be the first large man in baseball, though). Little did the Commander-in-Chief and future Chief Justice know that he would create a baseball tradition when he attended an Opening Day game in 1910.

That tradition was the seventh inning stretch.

Nowadays, the seventh-inning stretch is more of a spectacle than a respite from gameplay. In New York, the Yankees spend their stretch singing "God Bless America" while the Mets throw t-shirts to their fans. In the minor leagues, the fans are treated to pie-eating and home team trivia contests, or even a race around the diamond against a mascot.

But who was the first person to stand up and stretch in the seventh inning? The answer might surprise you.

Who Started The Seventh-Inning Stretch? 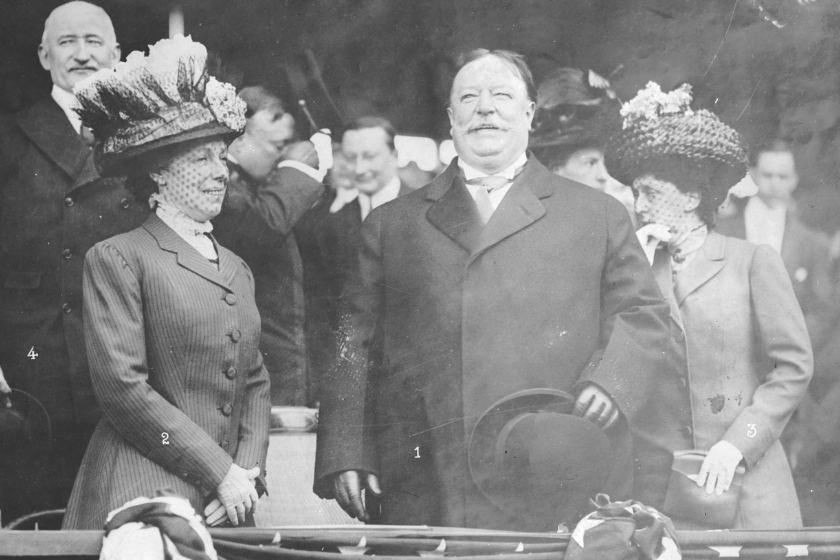 Harry Wright, one of the founders of baseball, wrote in a letter in 1869 that fans got up and stretched at Cincinnati Red Stockings games for years, but Taft was the man most closely associated with the movement.

While attending a game at Griffith Stadium between the Washington Senators and Philadelphia Athletics in Washington, D.C. on April 14, 1910, Taft threw out the inaugural presidential first pitch after an umpire handed him the game ball in the stands.

While watching the hometown team, he grew tired of sitting on the ballpark's hard benches and stood during the middle of the seventh inning. The dude stood 6-foot-2 and tipped the scale at over 300 pounds, so it's understandable why his wooden chair would be uncomfortable after a couple of hours.

Not wanting to be disrespectful to the 27th President of the United States, the entire crowd stood with him and cheered, thinking he was leaving the stadium.

That's just one theory, though.

Another story of the origins of the seventh inning stretch involves a man named Brother Jasper of Mary, who coached the Manhattan College baseball team in New York in the early 1880s. On a hot day, Jasper called a time-out and told the crowd to get up and stretch before the bottom of the seventh. The team's fans continued the tradition afterward.

According to MLB.com, the 7th-inning stretch tradition became so popular in the area that New York Giants fans adopted it themselves after an exhibition game. It became a mainstay at the historic Polo Grounds. Peruse Mahattan College's website and you'll find that the school still maintains it began the iconic sport's tradition.

So, what's the correct theory? It could be a combination of all of these stories.

Wright's 1869 letter sounded a whole lot like what we refer to as the seventh-inning stretch: "The spectators all arise between halves of the seventh inning, extend their legs and arms and sometimes walk about. In so doing they enjoy the relief afforded by relaxation from a long posture upon hard benches."

Brother Jasper played a part, too, and President Taft certainly helped popularize the timeless tradition. In any case, Major League Baseball games are nothing without those seventh-inning stretches. It's the perfect time to grab another beer or grab a big bag of popcorn.

"Take Me Out to the Ballgame" came later with the help of legendary Chicago Cubs and White Sox announcer Harry Caray and songwriter Jack Norworth, and the two traditions would be connected forever.

With MLB stadiums getting ready to hold fans in 2021, there will be plenty of opportunities to stretch and sing throughout this season. I, for one, can't wait to get back to a game.

This article was originally published on March 1, 2021, and has been updated with more theories.