Baseball is a game of tradition, which is why it's called America's Pastime. Embedded in this nearly 200-year-old kid's game is a set of unwritten rules that has been developed, added to and followed by players in Major League Baseball.

The unwritten rules of baseball aren't necessarily obvious. That's why they're "unwritten." Anyone who's ever spent time on the diamond knows at least some of these, however. Bat flipping and throwing at a hitter's head is absolutely not allowed. Even Babe Ruth's famous called shot and Joe Carter's World Series walk-off may have violated these silent statutes. But when San Diego Padres budding star Fernando Tatis Jr. hitting a grand slam on a 3-0 pitch stirs controversy, this rulebook may have gone too far.

As a new generation of MLB players takes over, it feels like these unwritten rules are being either erased or rewritten. Flashiness and cockiness is fun to watch, as Javier Baez and Tim Anderson have shown us, and it's becoming more acceptable for players to celebrate their home runs immediately after hitting them.

Fans of the past are coping with the fact that the game they knew is changing rapidly before their eyes. Cardboard cutout fans and launch angles and analytics became normal. While the written rules often times scream "duh!" like not betting on games (ahem, Pete Rose), the unwritten rules can be hard to pin down. Every sport, including the NFL, NBA and NHL, has a list of unwritten rules, but baseball seems to be the king of them.

Breaking some of baseball's unwritten rules will turn coaches red in the face. Some are simply about respecting the game and everyone else on the field. One thing is for sure: Alex Rodriguez has probably violated half of the baseball rules you're about to read.

Note: I disagree with most of these rules, as they are outdated and make the game less fun. Still, they are "unwritten" rules. 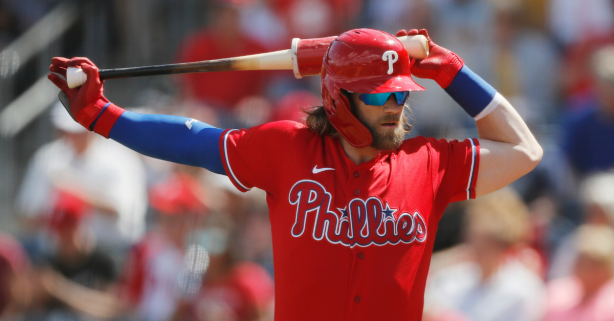 Common sense here. Pitchers aren't always the most athletic. If someone else can get to it, they should.

29. The centerfielder calls off other outfielders.

Balls in the gap that either outfielder can make most always belong to the centerfielder. You should want Mike Trout touching the ball as often as possible.

28. Shortstop calls off other infielders.

This is similar to the previous rule. Shortstops take precedence over all other infield positions. If they say they've "got it" on a pop-up, let them have it.

27. Don't make the first or third out at third base.

This one drives coaches nuts. The reason baserunners should avoid making the first or final out at third base in an inning is simple. They're scoring from second base on a single with two outs anyway, and a man on second with zero outs can be moved over to third base on a ground ball, giving way to a sacrifice fly on the second out. Don't take yourself out of scoring position by running into an out.

26. Take until you get a strike down late in the game.

This rule is a common approach for teams down a few runs heading into the ninth inning. Pitchers will not appreciate a batter swinging out of his shoes on the first fastball he sees.

25. Don't throw the bat at the catcher or umpire on your backswing. 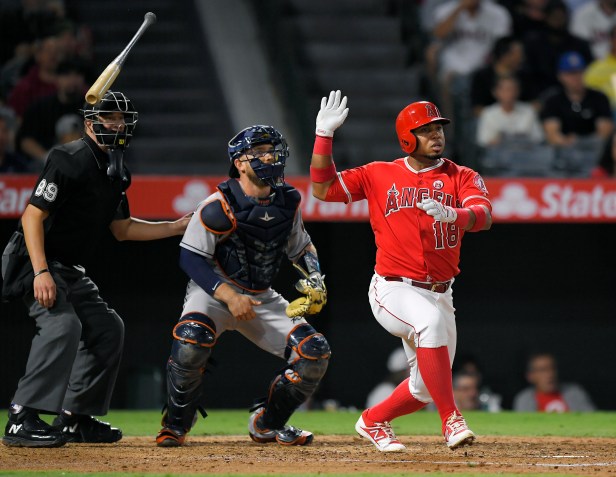 24. Never intentionally try to distract a fielder from catching a pop-up.

Remember when New York Yankees' Alex Rodriguez did this to a Toronto Blue Jays third baseman with two outs in the ninth? Yeah, it pissed off a whole lot of dudes. It's bush league.

23. No slapping the ball out of a fielder's glove.

Shocker. A-Rod famously broke this one as well in the playoffs when he karate chopped Boston Red Sox pitcher Bronson Arroyo's glove. Is this little league? C'mon Mr. Rodriguez

Treat the chalk foul line like a crack in the sidewalk that broke your mother's back if you stepped on it. Don't even think about digging your cleats into it.

The mound is the pitcher's sanctuary. It's his home for that game. When running back to the dugout, avoid trotting across it at all costs. Dallas Braden taught A-Rod that very important lesson in 2010.

20. Don't peek at the catcher to steal signs.

This is iffy. Stealing signs is a part of the game, but doing it in this way just isn't accepted. The opposing catcher will probably even tell a batter where to go if he does.

19. Hustle around the bases after a home run.

Even if you don't necessarily admire a home run, taking too long around the bases is grounds for a bean ball the next at-bat. Manny Machado once endured Washington Nationals closer Jonathan Papelbon's wrath for slowly making his way around the bases in a baseball game. Get moving. 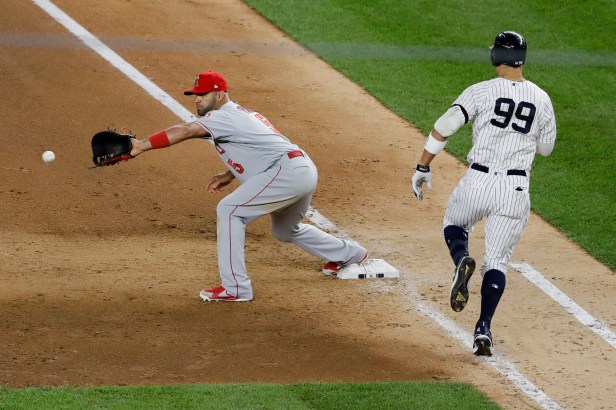 It's not just home runs. Batters are expected to bust out of the box on routine outs like grounders, fly balls and pop-ups. Bryce Harper once got an earful from Jonathan Papelbon after not running hard to first base on a fly out. It's just not a good look.

The expression "don't rub it!" has echoed throughout little league fields across the U.S. It's a sign of weakness.

16. Stay away from the batter's box while the pitcher warms up.

Come near home plate while the pitcher is throwing his warm-up pitches and you might end up like the window of a car that once distracted A.J. Burnett. The on-deck circle is perfectly fine.

Ever seen a batter assume a 3-1 pitch is ball four but then it's a strike? Yeah, umpires don't appreciate that. You better be swinging if it's close on the following pitch.

This one is up in the air. If it's a good pitch to hit, the batter should have the green light. Just know that pitchers won't be best friends with the batter after that.

13. Don't show up your own teammates.

Nothing will piss off fielders more than their pitcher getting visibly mad at them for committing an error. Errors happen just like serving up home runs do.

12. Bean balls stay below the head.

Throwing at batters is an integral part of the game. It's the way players police each other. Los Angeles Dodgers reliever Joe Kelly may as well be the sheriff of the 2020 season after going head-hunting for Houston Astros players. But the rule here is that the noggin is off-limits. Trying to injure players is a big no-no, and the head is too dangerous to play with.

11. Don't talk to a pitcher who's throwing a no-hitter or perfect game.

If a starting pitcher is seven innings deep into a no-hitter or perfect game, stay away from him in the dugout. Don't even look at him. He's in the zone, and the last thing he wants is for someone to take him out of it.

This one is apparently a big deal in the MLB. Veteran players have earned the right to speak out and complain when they see fit. Rookies should shut up and absorb everything.

Tatis Jr. doesn't care for this rule. Neither did Chicago White Sox slugger Yermin Mercedes when he hit a home run on a 3-0 pitch off position player Willians Astudillo while his team was up 15-4 in the seventh inning against the Minnesota Twins in 2021. It's premise is simple but stupid. A good pitch is a good pitch. Why let it go by?

8. Don't steal bases if your team is way ahead or way behind.

Michael Jordan once stole third base in a blowout. Needless to say, third base coach Terry Francona had to inform him what he did wrong. 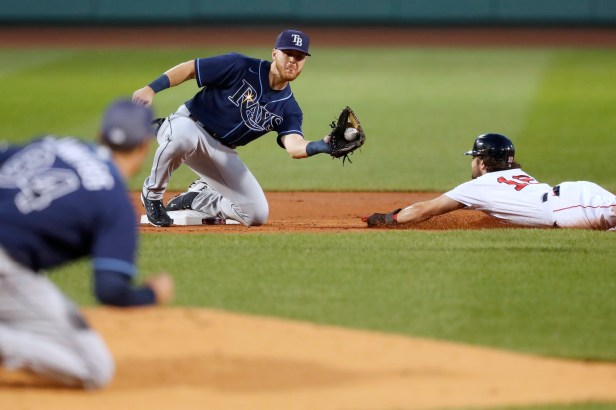 Apparently, Justin Verlander has a problem with this. If the two-time Cy Young award winner and 2011 American League MVP says it's an unwritten rule, then I believe him.

Tom Hanks gave us this rule straight from "A League of Their Own," and every kid's dad has probably said the same thing. Tears after a strikeout is never a good look and belongs in tee ball. Unless you lose the World Series in walk-off fashion. Then it's OK.

An obvious one that has created quite a bit of controversy over the years. Is it really appropriate to hurl a 90-MPH fastball at a batter in retaliation? Most baseball players will say yes. Do it to Prince Fielder, and he may just storm the opposing team's clubhouse after the game.

4. Never bunt to break up a no-hitter. 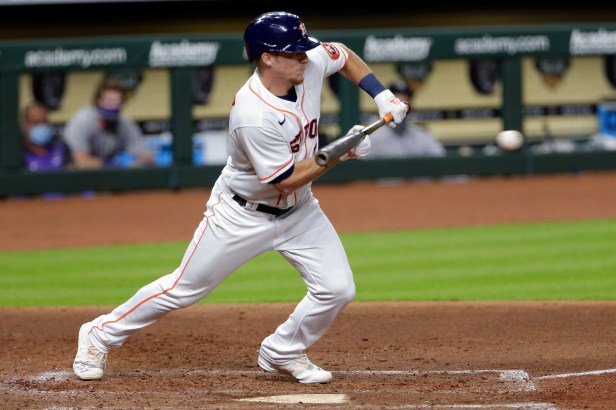 Bunting to break up a no-hitter is seen as one of the most cowardly moves a batter can make. It's a fair way of trying to get on base, but pitchers will hate your guts if you do it. "Get in there and try to hit what I'm throwing" is what pitchers are likely thinking.

Fans at home gripe about this one all the time when someone from the broadcast booth mentions a no-hitter or perfect game. They're just doing their job!

When Bryce Harper hit a dinger against San Francisco Giants bullpen pitcher Hunter Strickland in 2014, he watched it sail into the sky. Strickland remembered the at-bat and took it out on him three years later when he faced him again. That hit-by-pitch and ensuing brawl is a culmination of one of baseball's most-cited unwritten rules. Pimp the home run and you might face the consequences.

It's one thing for a big leaguer or power hitter to hit one into McCovey Cove and pull out his binoculars. It's another for him to flip his bat as far as the home run itself. Jose Bautista's bat flip heard around the world against the Texas Rangers was beloved by some and hated by older folks. Tim Anderson ruffled feathers when he did the same in 2019 (pipe down, Tony La Russa). Bat flips are fun and awesome to watch. Maybe pitchers should focus on making better pitches instead of telling hitters what to do after gifting them long balls.

MORE: How Did Shortstop Get The Name "Shortstop"?