Nowadays, baseball positions and roles can leave your brain a tangled mess. MLB teams have specified their rosters so much that viewers watch managers bring in left-handed relief pitchers who only face southpaw hitters. Ever heard of the LOOGY? That's a "Left-Handed One Out Guy," a role that became virtually extinct with Major League Baseball's three-batter minimum rule.

Still, the most important positions are the ones that have been around since the game's inception in the 1800s. The shortstop birthed Derek Jeter's patented jump-throw, gave way to Cal Ripken Jr.'s incredible games played streak and allowed Ozzie Smith to backflip his way into the Baseball Hall of Fame. But did you know the same position Honus Wagner once manned wasn't even one of America's Pastime's original positions?

These days, the sport has nine definite positions around the baseball diamond. They're even numbered for scorekeeping purposes, which is where terms like "6-4-3 double play" come from. Anyway, here's a rundown of all of baseball's fielding positions, in order of importance, along with their assigned scorebook numbers in parenthesis and some extra terms and roles.

The pitcher is the most important position in baseball, without a doubt. Whomever toes the rubber dictates so much of the game that there's even a timeless phrase thrown around every MLB season: "Pitching wins championships." That is unless your pitcher is Clayton Kershaw and your team is in the playoffs.

Starting pitchers do exactly that. They start the game in the first inning. If a pitcher doesn't throw the entire game (usually nine innings), he turns the ball over to what is called the bullpen. The bullpen consists of relief pitchers like the closer (typically pitches the final inning), the setup man (the inning before the closer comes in) and middle relief and long relief pitchers. Some teams employ left-handed relief pitchers that are only used against left-handed hitters. Think of the bullpen like its name implies; These guys are waiting in the wings to come out for one or two innings and fire the ball as hard as they can to rack up strikeouts. Bulls in the pen.

The catcher helps dictate the game, and because they touch the ball nearly every pitch, they come in second on this list. Crouched behind home plate, they call and receive pitches from the pitcher, often times field bunts and throw out runners trying to steal bases. Catchers are also pivotal in helping pitchers get strike calls from the umpire behind them by framing pitches to make them look like strikes. They are also almost never left-handed.

The "backstop" features more protective gear than any other player so he can ensure an errant pitch doesn't get by him. He also wears a thicker catcher's mitt that can withstand pitches. Every MLB team has a back-up catcher ready to go in case the first gets hurt, as it's a grueling position to play. Also, don't forget to wear a cup!

Shortstop is between second and third base. Like third basemen, they must also have a strong arm. Additionally, players at this position are usually the most athletic of all the defensive positions. They need range, quickness, arm strength and accuracy and must be sure-handed with the glove. Because shortstop receives more ground balls than any other infield position, they also need to be consistent.

More than just ground balls, the shortstop is often times the cut-off man on fly balls and balls the outfielders don't track down. They typically call off all other infielders on pop-ups as well. This position used to feature light-hitting, fielding-first players in the past. But players like Derek Jeter, Cal Ripken Jr. and current guys like Javier Baez, Francisco Lindor and Trevor Story have shown that teams want offense at every position.

The history behind the name is actually pretty interesting. Back in the day, when baseballs looked more like lemons than apples and baseball players took to the city streets and sandlots like Benny "The Jet" Rodriguez, the only infielders were the three that stood on their respective bases. The first baseman patrolled first base, the second baseman on second base and so forth.

In 1849, a man named Doc Adams realized the need for another position to 1.) have someone in the middle of the field to receive throws from the outfielders, and 2.) stop ground balls that weren't hit directly at the bases, literally "stopping them short." One of the four outfielders came in and thus became the shortstop.

Some of the best players to ever play baseball defended center field. Mike Trout, Willie Mays, Mickey Mantle and Ken Griffey Jr. are arguably all top-10 players in the history of the game.

Why? Because these athletes are called upon to track down more fly balls than other positions and are faster than anyone else. A strong arm is a must to throw out runners. The center fielder is thought of as the "captain" of the outfield and calls off his fellow outfielders on balls in the gap. It's a hard position to play, which is why only the best can do it. 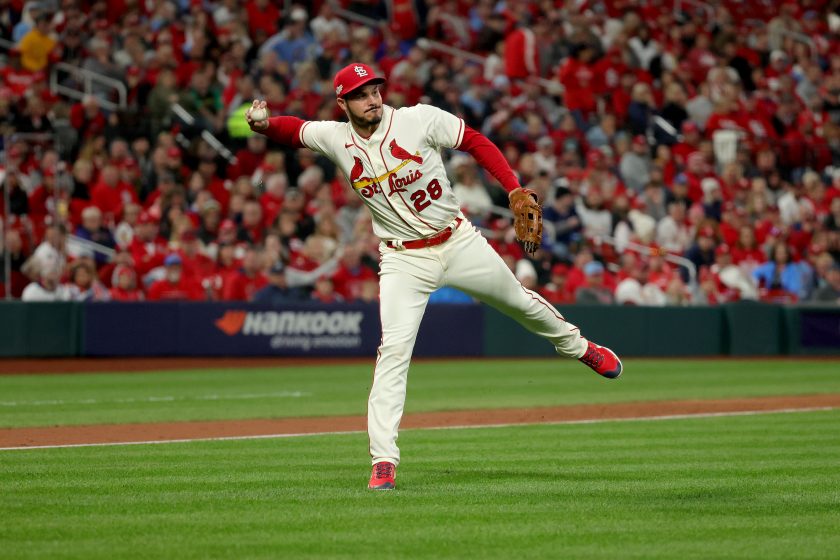 Third base is known as "the hot corner" for good reason. Third basemen must have terrific reactions on screaming line drives and hard-hit grounders from right-handed hitters. They also need strong throwing arms as they have the longest throw of any infielder to first base.

Third basemen are some of the more gifted athletes in the sport because they need range to field balls to their left and right and bunts in front of them. Brooks Robinson, Mike Schmidt, Chipper Jones, George Brett and Nolan Arenado are perfect examples of that. While there are fewer third basemen in the Baseball Hall of Fame than there are any other position, times appear to be changing. Arenado, Anthony Rendon, Kris Bryant, Alex Bregman, Manny Machado and Vladimir Guerrero Jr. are currently some of the bright young stars in baseball.

Although second basemen used to literally stand on second base in the old days, they now play between first and second base. These players are typically quick, have smooth hands and can get the ball out of their gloves fast (usually to the shortstop on double plays). Second basemen do not usually have strong arms because most of their throws are only short distances.

The second baseman makes up one-half of a team's middle infielders along with the shortstop, and requires a great deal of range considering the first baseman typically doesn't have a whole lot. Guys like Joe Morgan, Ryne Sandberg, Craig Biggio and Dustin Pedroia are prototypical second basemen.

Think Vladimir Guerrero, Bryce Harper, Ichiro Suzuki or Roberto Clemente. Right fielders require cannons for arms, and all of those guys have them. That's because the throw from right into third base is farther than any other throw.

Right field is also where the less-talented youth players can be "hidden" because they see less action than other outfield positions. That's sometimes true in the major leagues, where Hank Aaron, Reggie Jackson and Tony Gwynn all became more known for their hitting abilities than fielding. 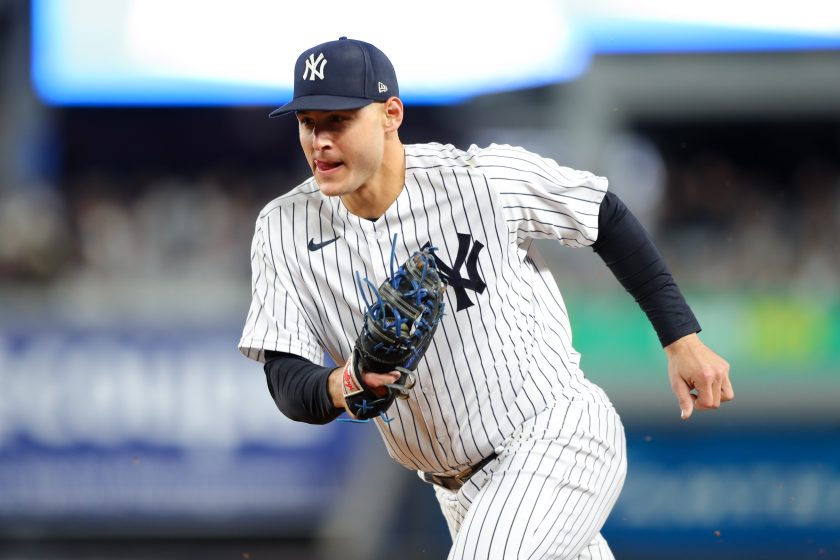 First base is typically where teams stick their big-bodied, power hitters at. Think Albert Pujols, Lou Gehrig, Jim Thome and Mark McGwire. They're responsible for the area around first base and the bulk of their duties include receiving throws on ground balls, holding runners at first base and stopping hard-hit balls from lefties. Similar to catchers, this position also uses a big mitt with a wide web.

First basemen typically don't possess the range that other infielders do, because the position doesn't require it. That's why many infielders transition to first base later in their careers when they're not able to cover as much ground anymore. In MLB, you'll find a good majority of first basemen are left-handed. That's because right-handers have an easier time fielding and throwing to first base at other infield spots.

Left field requires the least of any other outfield position, which is why beefed up Barry Bonds, Manny Ramirez and even Babe Ruth once called the position home. Throws catching base runners at third or home are shorter, so these players don't need great arms.

Still, left fielders need halfway decent speed, range and ability to judge fly balls, especially line drives right at them. Depending on the stadium or field they're playing in, that might even mean scaling the outfield wall and robbing potential home runs.

A subject of debate for years, the designated hitter used to be a position only used in the American League or in games played at American League stadiums. The rule, adopted by the AL in 1973, says that the designated hitter (DH) can bat for another player (typically the pitcher) for the duration of a game. MLB officially adopted the DH in the National League in 2022, making it universal.

The DH does not play in the baseball field and focuses solely on hitting. David "Big Papi" Ortiz, Frank Thomas and Edgar Martinez are all ideal DHes, because they're not great fielders but can wallop the heck out of a baseball. If a team moves their DH into the field, they then "kill the DH," which means whomever he was hitting for (probably the pitcher) has to bat from that point on.

Pinch hitters are players not currently in the game who are inserted when it's time for a player to bat. A manager will often call upon one of his bench players to pinch hit for the pitcher when his spot rolls around in the lineup. Often times, the pinch hitter's only role in a game is one single at-bat.

One of the greatest home runs in postseason history came at the bat of pinch hitter Kirk Gibson. His 1988 World Series Game 1 walk-off home run on an injured leg will forever be legendary. Baseball's all-time pinch-hit leader is Lenny Harris, who had 212 of them.

Pinch runners are put in the game to run for another base runner. They're usually speedy, have sometimes made base stealing their craft and take the spot of someone slower. As with pinch hitters, there aren't many players that are exclusively pinch runners. Most of the time, a quick utility player is used as a pinch runner.

Utility players are very versatile. These guys are usually bench players who can play in the infield and outfield and sometimes are a team's emergency catcher. Ben Zobrist and Michael Young are perfect examples of this gifted type of defensive player.

MORE: How Many Stitches Are On a Baseball? Here's How One is Made