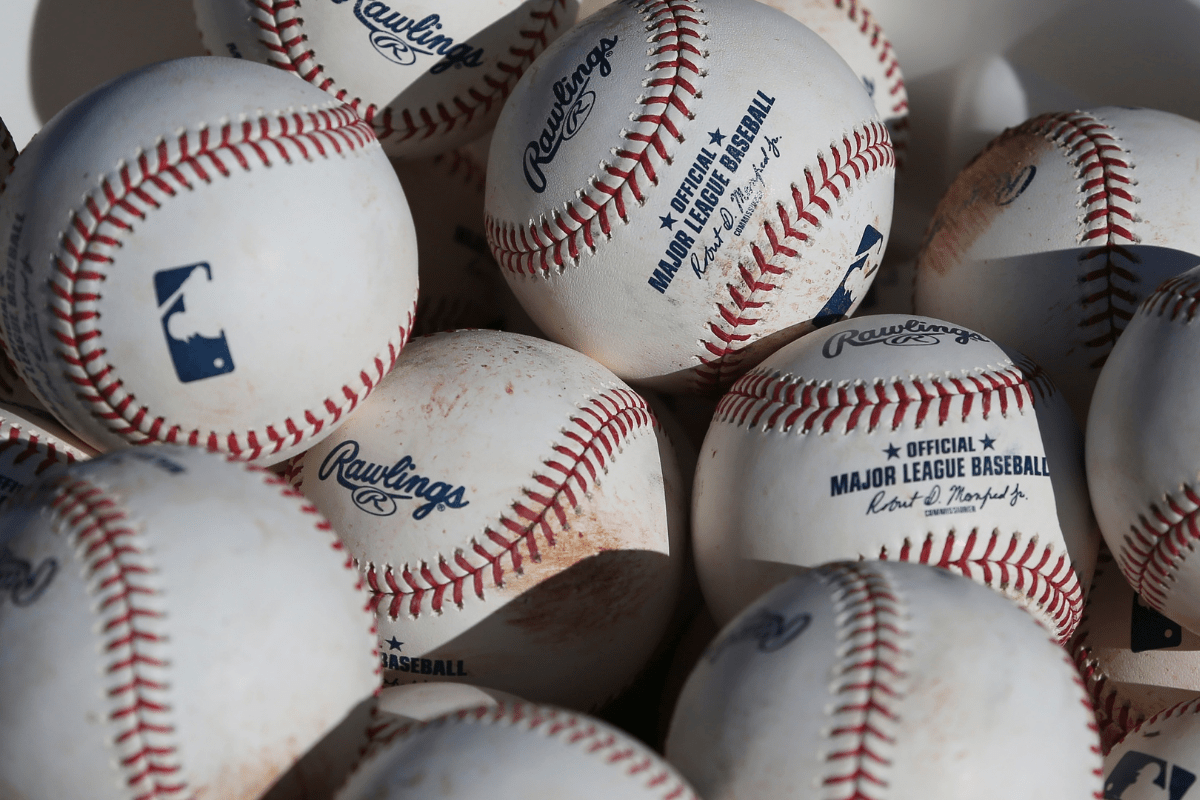 Since then, baseball changed quite a bit. Babe Ruth transformed the game forever (and also struck out against this awesome 17-year-old girl), Reggie Jackson and Derek Jeter became World Series heroes and All-Stars like Nolan Ryan and Barry Bonds elevated baseball to new levels.

The baseball itself also looks different today than it did back in the 1800s. Everything from the stitching to the leather and the size and weight of MLB’s official baseball is completely different than its early origins.

Of course, one of the more common topics is the number of stitches on the baseball. It’s a handy tidbit of knowledge if you ever find yourself engulfed in a round of baseball trivia. Let’s “unwind” just what all goes into the making baseballs.

History of the Baseball

A lemon peel style baseball from the first game to charge admission on July 20, 1858 at the Fashion Race Course in Long Island, New York. Click the link to learn more or see this ball in person by visiting our "Taking the Field: The 19th Century" exhibit. https://t.co/8CMTbeVNw2 pic.twitter.com/C8a6WLwzVS

Early versions of the baseball weren’t exactly high-tech. A rubber core was formed from old, melted shoes that was then wrapped in yarn and leather.

In the 1840s and 1850s, pitchers typically made their own balls and pitched with them. Balls back then were called “lemon peel balls” for their distinct four lines and stitching design that gave it the appearance of a lemon. They were also smaller and weighed less than the ones we’re used to, which meant home runs and high-scoring baseball games were common.

It wasn’t until 1876 that the sport had one standardized ball. According to Smithsonian Magazine, Boston Red Sox pitcher A.G. Spalding (ever heard of that last name?) changed the course of the history of baseball after he retired from the game and convinced the National League of Professional Baseball Clubs to use the balls he made. Spalding’s company then produced the official baseball for the next 100 years.

In 1976, MLB switched from Spalding’s to Rawlings Sporting Goods. All these balls are produced in Costa Rica, where Rawlings is based out of, and then shipped to the United States.

How is the Modern Baseball Made?

According to MLB’s rulebook, MLB baseballs must weigh between 5 and 5.25 ounces and measure between 9 and 9.25 inches in circumference.

Official major league baseballs first start with a core of cushioned cork mixed with rubber. That is covered in a layer of black rubber before another red rubber layer is added. Yarn winding comes next. A revolving machine winds more than 200 yards of wool and another 150 yards of fine white cotton around the core.

Once rubber cement is applied, two strips of white horsehide or cowhide leather in the shape of a figure-8 pattern are applied, stapled, and stitched together. In 1934, the American League and National League first agreed on the cushioned cork center, yarn wrappings, rubber cement coating and the horsehide cover. Cowhide covering was adopted in 1974.

How Many Stitches Are On a Baseball?

The baseball stitching process is the most intricate and time consuming part of the creation of a baseball.

Once the cowhide covers have been stapled on, someone has to hand-stitch them with red thread. In total, 108 hand-stitched double stitches are used to cover the baseball. At the MLB level, these red stitches and the rest of what is used in a baseball are stored in temperature-controlled facilities and wound under tension so no “soft spots” exist in the ball, according to Smithsonian Magazine. These stitches are vital for pitchers, as it helps with gripping curveballs and sliders, among other offerings.

How Long Does Hand Stitching Take?

These 108 red threads are carefully applied to each baseball by hand.

A total of 88 inches of waxed red thread are used in the process. According to MadeHow.com, this process takes an average of 13-14 minutes for each ball.

Typically, the first and last stitch are completely hidden. Once the threading is finished, the staples are taken out and the ball is put through a rolling machine for another 15 seconds to eliminate any raised stitches. Once the ball passes inspection, it’s good to go for the big leagues.

Whether you’re a hitter trying to knock the cowhide cover off the ball, an umpire calling balls and strikes, or a fan trying to catch a foul ball, baseball players and enthusiasts get up close and personal with the ball itself quite often. We get a glimpse at those 108 stitches, and now we know just how much work goes into getting them there.

MORE: Softball vs. Baseball: 6 Differences Answering ?Which Sport is Harder??