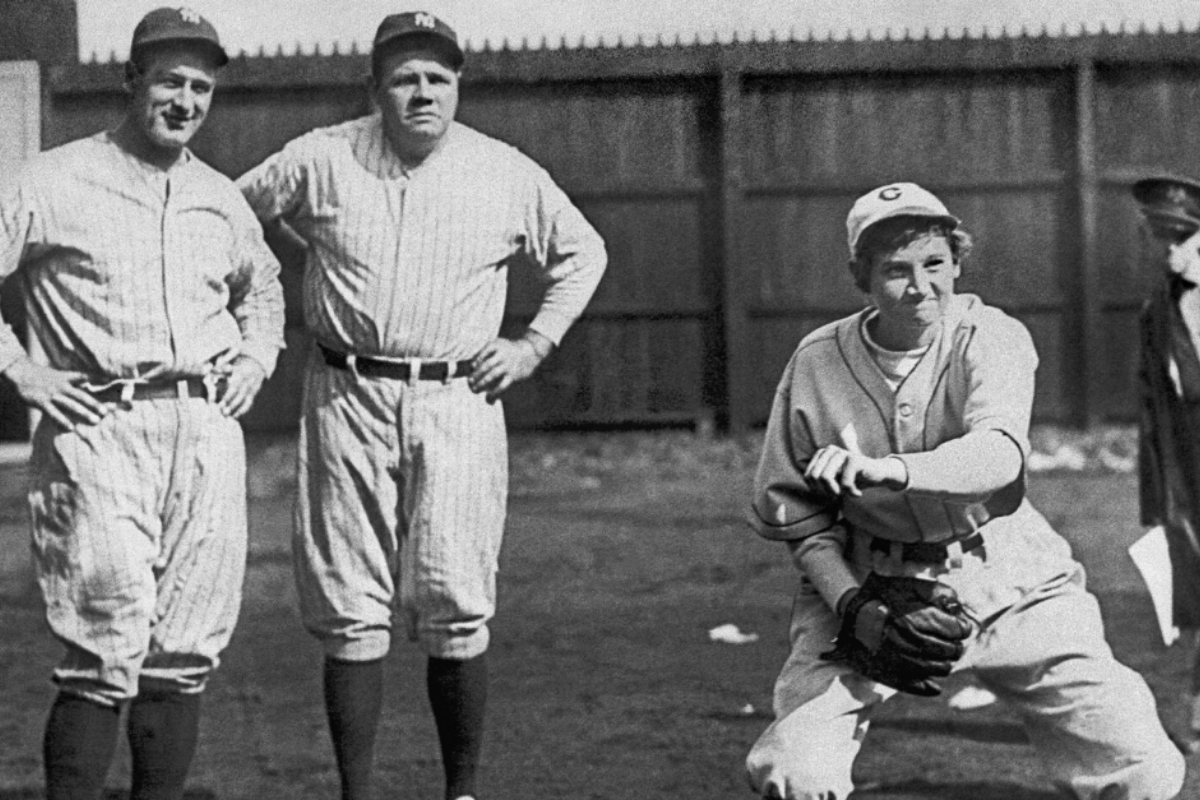 Women have always had a place in Major League Baseball, it’s just never been as actual baseball players. The Kissing Bandit was famous for smooching America’s Pastime’s superstars in the middle of games, Mo’ne Davis garnered national attention pitching in the Little League World Series, and Sister Mary Sobieck is the nun renown for her fireball first pitches.

Still, the times are changing. More women are coaching for MLB teams and calling broadcasts than ever before. Plenty of names throughout history like Mamie Johnson, Lizzie Arlington and Ila Borders have pitched in the minor leagues or at some professional level.

So, why hasn’t a woman played in a MLB game yet? There had to have been someone in the sport’s 150-year history with the skills to play at baseball’s highest level. Think not?

Mitchell was just 17 when she set the baseball world on fire by striking out Babe Ruth and Lou Gehrig on back-to-back at-bats. So who the heck was the flame-throwing female, and why was she facing two of the best hitters in MLB history?

Who is Jackie Mitchell?

KNOW HER NAME👑
Today in 1931, 17yo Jackie Mitchell, the 2nd woman to play baseball in the male minor leagues, struck out Babe Ruth and Lou Gehrig. The Baseball Commissioner then voided her contract, claiming baseball was too taxing for women. The ban wasn't overturned until '92 pic.twitter.com/rVjqHaayKH

Mitchell had only just learned how to walk when her father introduced her to baseball. She was born in Chattanooga, Tennessee, in 1912, but grew up in Memphis. It was there that her next door neighbor and Baseball Hall of Fame pitcher, Dazzy Vance, taught her how to pitch.

Mitchell learned Vance’s “drop ball” and used the breaking ball to launch her baseball career as a pitcher. By 17, Mitchell was playing for a women’s team in Chattanooga called the Engelettes. While working out at a camp in Atlanta, Georgia, she caught the eye of Class AA Chattanooga Lookouts minor league baseball team owner Joe Engel.

Engel was a master of drawing crowds to his minor league team’s games during the Great Depression. He often used publicity stunts to gain attention, and he saw Mitchell as the perfect draw. So on March 25, 1931, he signed her to a contract.

She Struck Out Babe Ruth and Lou Gehrig

You read that correctly. #WomensHistoryMonth pic.twitter.com/D1ZgqspaqR

Mitchell had already made history by inking her deal with the team, and she hadn’t even faced Ruth and Gehrig yet.

Engel decided he would pitch the 17-year-old girl in an exhibition against the New York Yankees on April 2, 1931. The mighty Yankees were traveling as part of their spring training schedule.

This, of course, was huge news. A girl facing any MLB team should be. But this was the New York Yankees, the team littered with Hall-of-Famers that just won the 1927 and 1928 World Series.

Newspapers made jokes about the idea of Mitchell taking the mound.

One wrote “the curves won’t be all on the ball” and another wrote she “has a swell change of pace and swings a mean lipstick,” according to Smithsonian Magazine. Mitchell played along, however, by powdering her nose for cameras before the game.

Right, now for the strikeouts.

The left-handed Mitchell was brought in the game in the first inning after Clyde Barfoot, the Lookouts starting pitcher, surrendered a double and a single to begin the game.

Up to bat: The mighty Babe Ruth, whose at-bat is best told by Smithsonian Magazine:

First up was Ruth, who tipped his hat at the girl on the mound ?and assumed an easy batting stance,? a reporter wrote. Mitchell went into her motion, winding her left arm ?as if she were turning a coffee grinder.? Then, with a side-armed delivery, she threw her trademark sinker (a pitch known then as ?the drop?). Ruth let it pass for a ball. At Mitchell?s second offering, Ruth ?swung and missed the ball by a foot.? He missed the next one, too, and asked the umpire to inspect the ball. Then, with the count 1-2, Ruth watched as Mitchell?s pitch caught the outside corner for a called strike three. Flinging his bat down in disgust, he retreated to the dugout.

Mitchell followed that up by sitting Lou Gehrig down on three straight pitches. Just like that, Jackie Mitchell’s name went down in baseball lore.

Headlines the following day raved about the 17-year-old girl who struck out the Colossus of Clout and The Iron Horse, two of the greatest hitters and sluggers in MLB history. ?Girl Pitcher Fans Ruth and Gehrig,? read a New York Times article.

Afterward, Ruth told a Chattanooga newspaper he wasn’t sure baseball was right for women.

“I don’t know what’s going to happen if they begin to let women in baseball,” Ruth said. “Of course, they will never make good. Why? Because they are too delicate. It would kill them to play ball every day.”

Maybe Ruth was still salty about striking out.

Did They Strike Out On Purpose?

Thought by some to be a belated April Fools' Day hoax, Chattanooga Lookouts' pitcher Jackie Mitchell, a 17 year-old girl, strikes out Babe Ruth and Lou Gehrig in the first inning of an exhibition game. pic.twitter.com/7aN4LdLqHb

This story almost too good to be true, which begs the question: Was it all just a publicity stunt? Were Ruth and Gehrig in on the charade?

Those answers vary depending who you ask.

The New York Times wrote that Ruth gave the crowd what they wanted and Gehrig joined in on the act as well. Another theory is that because the exhibition game was originally scheduled for April 1 before rain postponed it that Engel was using the stunt as an elaborate April Fool’s Day prank.

Mitchell, meanwhile, called B.S. She struck them out fair and square at the ballpark.

?Why, hell, they were trying, damn right,? she said in 1987 of the famous at-bats, according to Smithsonian Magazine. ?Hell, better hitters than them couldn?t hit me. Why should they?ve been any different??

MLB sees it slightly different than Mitchell. John Thorn, MLB’s official historian, told Smithsonian Magazine the two Hall-of-Famers had an agreement either with each other or with Engel. The result would be a very entertained crowd.

?The whole thing was a jape, a jest, a Barnumesque prank,? Thorn said. ?Jackie Mitchell striking out Ruth and Gehrig is a good story for children?s books, but it belongs in the pantheon with the Easter Bunny and Abner Doubleday ?inventing? baseball.?

There’s no true, definitive answer. Maybe Mitchell’s appearance was all a show. Maybe not. But one thing’s for sure: Jackie Mitchell definitely struck out two of the best hitters in MLB history.

Born on this day: Jackie Mitchell, the young woman that struck out Babe Ruth and Lou Gehrig.

After her stint with the Lookouts, Mitchell’s baseball career didn’t exactly take off.

Mitchell began barnstorming with a men’s team known for long hair and beards called the House of David. Sometimes Mitchell would reportedly don a fake beard herself while traveling with the team.

Mitchell grew tired of her baseball abilities being turned into a circus side show. She was once asked to ride a donkey while pitching, and by 1937, she retired at just 23. The All-American Girls Professional Baseball League tried to convince her to unretire when it formed in 1943, but Mitchell declined.

MLB later banned women from playing baseball in 1952, which lasted all the way until Carey Schueler was drafted by the Chicago White Sox in 1993.

Still, Mitchell is forever a part of baseball history. She was one of the first female pitchers in baseball history and just the second woman to play organized baseball after Lizzie Arlington did so for the Reading Coal Heavers against the Allentown Peanuts in 1898. Several more followed.

Mitchell threw out the first pitch for the historic Chattanooga Lookouts team on their opening day in 1982 and five years later she died in Fort Oglethorpe, Georgia.

To this day, Jackie Mitchell is still known as the girl who struck out Babe Ruth.

MORE: Babe Ruth Put Cabbage Under His Baseball Hat, But Why?