Baseball has come so far since the days of the Chicago Black Sox scandal, Pete Rose betting on games and Mickey Mantle's alcoholic habits. Major League Baseball executives today are concerned over the need for robot umpires and figuring out how to make Mike Trout as marketable as LeBron James is.

Make no mistake, though, the crazed fans that attend games haven't gone anywhere. Girls took center stage in Los Angeles when they rushed Dodgers star outfielder Cody Bellinger to hug him during the 2019 season. In the World Series, two women flashed the camera from behind home plate and were subsequently banned from future MLB games and stadiums.

These actions may have been seen as good-natured fun decades ago, but today they're considered security concerns.

While rushing players in the middle of games has been around for eons, one woman became famous for doing it and planting smooches on players' cheeks. Everyone from players to fans loved it and couldn't wait for her next on-field appearance. Her name was Morganna the Kissing Bandit.

If you've never heard of the "Kissing Bandit," whose real name is Morganna Roberts, you have missed out on a key piece of baseball history.

Who is Morganna "The Kissing Bandit"?

Morganna's life story is actually a pretty wild one. She was born in Louisville, Kentucky, and went to live with her grandmother after her mother disowned her. At just 13 years old, she ran away from Catholic boarding school to hitchhike to Baltimore with a friend.

Too young to work, she begged shop owners for a job and ate out of garbage cans to feed herself. She lied about her age and applied to be a "cigarette girl", but the owner decided she'd make a better exotic dancer.

Morganna thrived as a dancer. She wore signature 10-gallon cowboy hats on her breasts, which were considered incredibly large. So large, in fact, that the blonde-haired bombshell wore I-cup bras and took aerobic classes to strengthen her back because they were so heavy.

Known as "Morganna, the Wild One" as a dancer, she didn't earn "The Kissing Bandit" moniker until August 1969. She leapt the fence at Cincinnati's Crosley Field and kissed Cincinnati Reds baseball player and MLB's all-time hit king Pete Rose.

Rose apparently wasn't happy with the interaction and cursed at her but tracked her down that night when she was performing to apologize with roses in hand.

"I remember at the time he was doing commercials for ballpark franks," Morganna said. "I ran up to him and said, 'Pete, I buy your hot dogs.' And he turned to me, and I remember exactly what he said, 'You crazy blanking broad.' But he used a big word, 'Are you out of your blanking mind?'" she told USA Today in 2019.

"And then I gave him a kiss on the cheek and I ran off and that was about it for that that romantic moment."

Morganna was dubbed the "Kissing Bandit" after a Cincinnati sportswriter wrote the headline following the game: "Bandit steals kiss from Pete Rose."

Who Did Morganna Kiss?

Morgana, "The Kissing Bandit" is led away after smooching George Brett during the '79 All-Star game at the Kingdome. pic.twitter.com/sLyg2q8SEw

RELATED: '10 Cent Beer Night' Was The Craziest MLB Promotion Ever

Morganna went on to kiss more than 40 professional athletes over her illustrious career, including NBA, NHL and NFL players.

The Bandit had a knack for seeking out the All-Stars and stopped at nothing to show her affection. Nolan Ryan, Cal Ripken Jr., Johnny Bench, Steve Garvey, Don Mattingly and George Brett all became victims, and there's even a picture of her attempting to kiss Frank Howard on display in the National Baseball Hall of Fame.

Of course, she has plenty of stories from her days storming baseball fields. One of the funnier ones involved longtime Kansas City Royals third baseman George Brett.

Morganna planted her lips on Brett's cheek during a game against the Baltimore Orioles while he waited on deck. Three weeks after their meeting, Brett found the stripper on stage and gave her a kiss back.

Most players didn't seem to mind Morganna's antics. One basketball player, former Detroit Pistons player Kelly Tripucka, said it was "like hugging a mattress. When I saw her coming at me, I thought it was like a Mack truck. I had two options -- either get hit or get out of the way. I decided to get hit."

Kareem Abdul Jabbar gets a visit from Morgana the Kissing Bandit before a 1989 Lakers-Rockets game: pic.twitter.com/YFFkGG5E

Morganna's NBA victims included Charles Barkley and Kareem Abdul-Jabbar. She even kissed a jockey, a race car driver and a mascot, The Sand Diego Chicken.

"There's no kissing on the lips in the middle of a baseball diamond."- Pete Rose shares his story of Morganna, the Kissing Bandit pic.twitter.com/658187Og0p

Morganna told USA Today she was arrested and charged with trespassing 19 times for rushing the field and was injured on multiple occasions.

In pursuit of kissable cheeks, the bandit suffered a cracked knee cap, a broken tailbone and three cracked ribs from being chased down by security. She was even hit by a pitch in Milwaukee.

"It was fun, but there's a time and place for everything, I think," she said. "You know, sometimes the rent-a-cops get a little carried away. That's just part of it. That and the jail is just part of it."

Once after kissing Houston Astros pitcher Nolan Ryan and shortstop Dickie Thon, Morganna's defense lawyer argued in court that she mistakenly fell onto the field because of gravity. According to Sports Illustrated, he said her 15-pound chest caused her to fall over the railing when she went for a foul ball and that "the rest is history." The judge laughed but the argument worked.

Where is Morganna The Kissing Bandit Now?

Morganna the Kissing Bandit sets her sights on Don Mattingly during a 1986 Yanks-Angels game: pic.twitter.com/t4Gy1UDx

"The Grand Dame of Baseball," now 74, lives a quiet life in Columbus, Ohio, with her husband, Bill Cottrell, and her dog, Bella. She has ditched her nickname and goes by Mo Cottrell now.

She reached out to FanBuzz and sent a picture of herself looking healthier than ever: 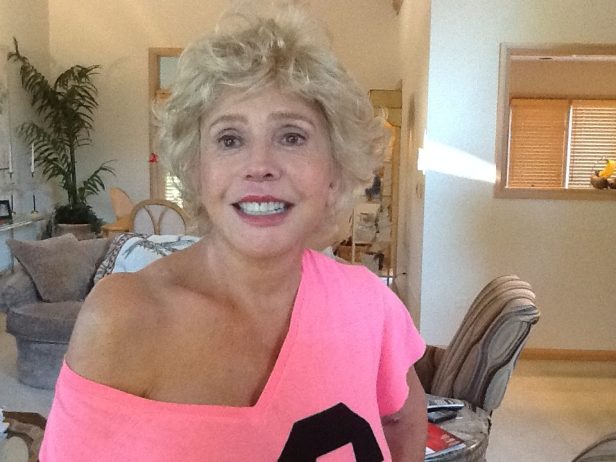 The Kissing Bandit reportedly earned millions from her fame.

She was featured on her very own bubblegum card set. At one point she owned part of a Minor League Baseball team. Other minor league teams invited her to game to kiss their players, which boosted attendances.

When Morganna wasn't earning thousands of dollars per week as an exotic dancer, she was making public appearances at events and conventions. She even appeared on Johnny Carson and David Letterman's late-night talk shows and posed for Playboy magazine multiple times in the 1980s.

ESPN ran an E:60 documentary on her, entitled "Morganna: The Kissing Bandit," which aired in 2014.

She even has signed pictures on Amazon.

Now more than 50 years since she debuted her on-field stunt, Morganna the Kissing Bandit is retired from her smooching days and doesn't plan on a comeback tour of any kind. That means players on the New York Mets, New York Yankees, Toronto Blue Jays, Boston Red Sox, St. Louis Cardinals, Chicago Cubs and Philadelphia Phillies are safe for now.

Although rushing the field may not be seen the same way it was during her time, there's no doubt Morganna Roberts would be celebrated on the diamond if she made one final appearance. I can't help but wonder who she'd pick to kiss first.

MORE: Steve Bartman's Life Changed at Wrigley Field, But Where Is He Now?