Since he was 16 years old, the spotlight has been on baseball player Bryce Harper.

The teenager appeared on the cover of Sports Illustrated, and was touted as baseball's LeBron James while still in high school in Las Vegas. All he's done since that hype is more than live up to it.

Ahead of the 2019 season, he signed a massive $330 million contract with the Philadelphia Phillies that pays him a ridiculous $43,766 every time he steps up to the plate. No wonder he didn't choose the Chicago Cubs, Atlanta Braves, San Diego Padres or Los Angeles Dodgers in free agency.

The superstar outfielder is arguably the face of Major League Baseball. He's not ashamed to stare down his home runs, flip his beautiful head of hair or say whatever is on his mind. Hell, Bryce even scrapped with former Giants' reliever Hunter Strickland after being hit by a pitch in a game.

With all of the fame that comes with being one of the game's top slugger,s one might expect Harper to have a huge ego.

His personal life, which includes a wife from his hometown and his two kids, will tell you he's actually a pretty down-to-earth guy. 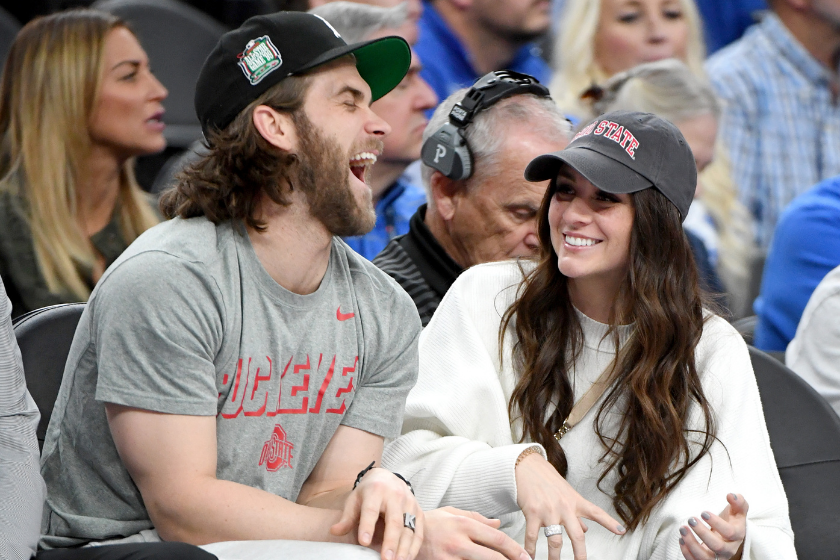 Like Bryce, his wife Kayla Varner (now Harper) was born in 1992 and raised in Las Vegas, Nevada.

Unlike some other MLB high school sweethearts, the pair didn't start dating until Bryce's rookie year in 2012. They got engaged in 2014 but reportedly briefly split up in 2015, when Bryce deleted all pics of his longtime girlfriend from his social media accounts. They apparently reconciled in 2016 and officially got married in December 2016 at the San Diego Mormon Temple.

Speaking of, Kayla was raised Mormon by her parents Sean Varner and Lizz Varner. She and her husband are both members of The Church of Jesus Christ of Latter-day Saints, so a temple marriage was always in the cards. The couple also teamed up with the wedding planning website, The Knot.

Bryce Harper told the Washington Times back in 2013 that he isn't trying to be "Mr. Tim Tebow," despite writing "Luke 1:37" on every autograph he signs. That bible verse reads "For with God, nothing shall be impossible."

"I try to be the best walking Book of Mormon as I can," Bryce Harper said. 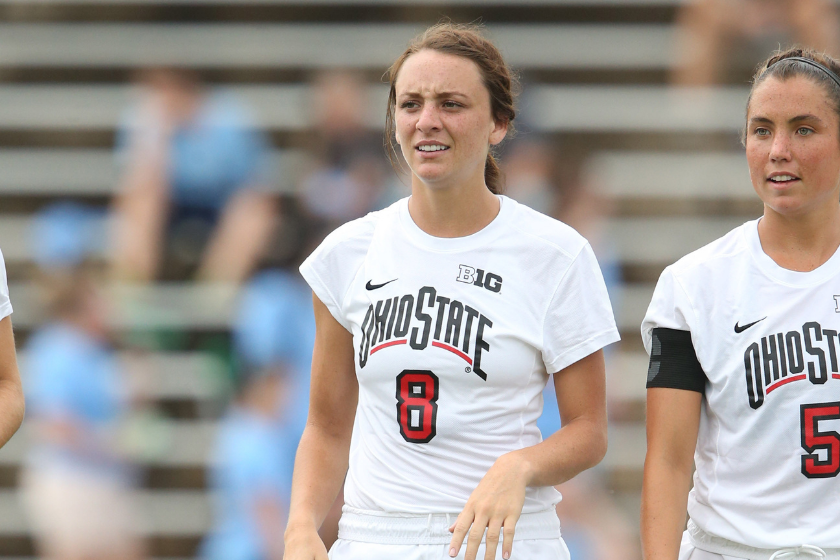 Kayla Varner is an athlete, too. She was a star soccer player at Green Valley High School, where she won a state championship, before going on to play at Brigham Young University and Ohio State University.

Varner played 33 games at BYU and even hit the game-winning penalty kick in a 2012 NCAA Tournament match against Marquette.

She transferred to Ohio State after two years at BYU. As a Buckeye, she scored two goals and five assists across 20 games. Kayla's rooting allegiance still lies at Ohio State.

In 2018, ESPN's College GameDay traveled to Ohio State and chose Bryce to be their celebrity guest picker. Bryce skipped college and headed straight for the MLB Draft after high school, but appears to be a big Buckeyes fan because of his wife.

The Harpers welcomed their first child into the family in August 2019.

"Everybody's healthy, so that's the biggest thing," Harper told MLB.com after the birth of his son. "But yeah, it's pretty cool to say I'm a dad now. It all went by super quick, but I'm really happy that she's healthy [and] the baby's healthy. That's all that matters."

Kayla had to defend her newborn son in September 2019. Washington Nationals fans went too far heckling her right fielder husband in a game at Nationals Park against his new team, the Phillies. The Nationals had just eliminated the Phillies from playoff contention. She didn't hold back in a tweet from her account, @kayyharper8:

"When you bring his son or family into it, yes you're crossing a line. Stick to your overused overrated and Harper sucks chants if you're really that loser that goes to a game to heckle someone. Phillies fans might boo him but they don't bring his 4 week old son into it. Classless," she tweeted.

Scroll through either of their Instagrams and you won't find son Krew's face. The couple doesn't show his face on social media, and that's probably for the best. Still, it would be cool to know if Krew looks more like his mom or dad.

My bet is one day Krew will be an athlete judging from his genes. Whether that be in MLB, NBA, NFL or the MLS is completely up to him.

The Phils' Bryce Harper was trending after he announced on the day after Father's Day 2020 (and the same day that news broke MLB was officially having a season amidst the COVID-19 pandemic) that Kayla was pregnant with their second child, a baby girl.

He tweeted a picture of them holding an ultrasound with the caption, "Girl dad!"

Bryce and Kayla officially welcomed their second child and first daughter to the world in November 2020.

Sorry, sorry Yankee fans. Naming his daughter Brooklyn Elizabeth Harper isn't a sign that Bryce wants to play in New York. She was named after her grandmothers, according to Kayla's Instagram page.

I, for one, can't wait to see her become a great athlete like her parents.

This post was originally published on May 21, 2020 before updating.