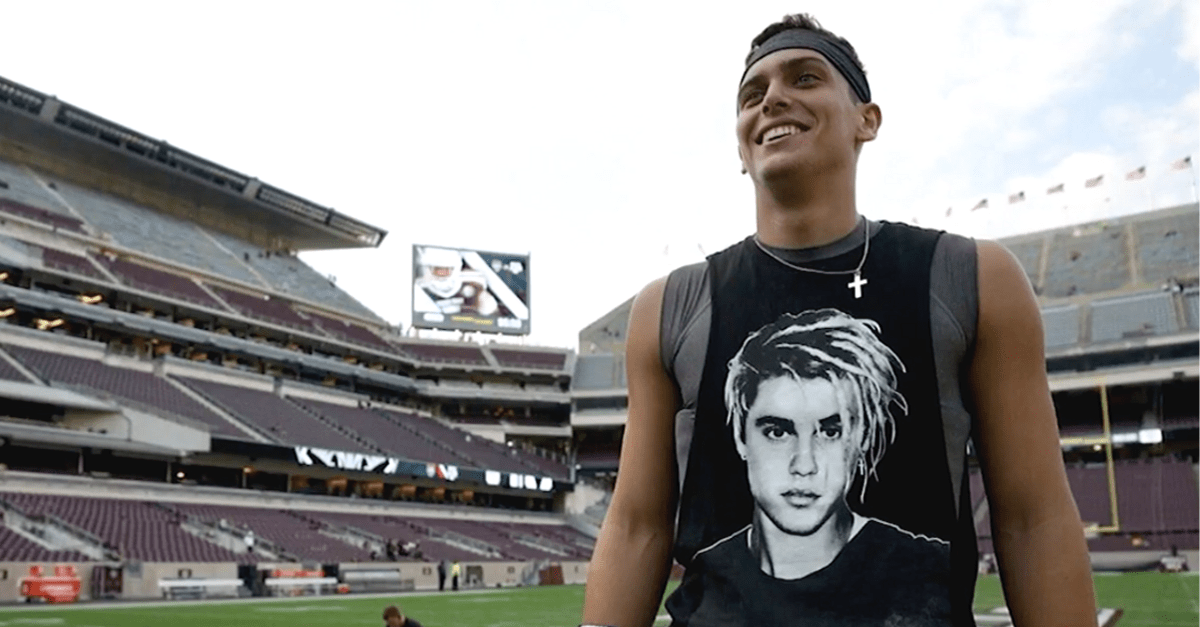 The Arkansas Razorbacks stink. Season two under head coach Chad Morris was thought to be a turning point in the SEC West bottom-feeder’s rebuild, especially with the additions of transfer quarterbacks Ben Hicks (SMU) and Nick Starkel (Texas A&M). While many thought the Razorbacks would at least be bowl eligible for the first time since 2016, a dead-last finish in the SEC West was to be expected.

Well, after losing to the San Jose State Spartans ? a team that finished 2-11 and 1-11 the last two seasons ? it looks like another long college football season for fans in Fayetteville, Arkansas hopelessly squealing “Wooo, Pig Sooie!”

After Hicks started the first two games of 2019, Starkel supplanted him as Arkansas’ starting QB mid-way through the team’s 31-17 loss to Ole Miss. It’s not really a surprise that Starkel is getting his shot. After all, this kid threw for 499 yards ? second-most in A&M history ? during the 2017 Belk Bowl before Kellen Mond won the starting job under head coach Jimbo Fisher.

A program change was necessary for Starkel, but there’s one thing that didn’t change: Nick Starkel’s undying love for pop star Justin Bieber.

Every game, Starkel wore a Justin Bieber T-shirt in pregame warmups and under his pads because, apparently, it was his good luck charm. Starkel even asked Ellen Degeneres to get him a meet-and-greet over spring break with The Bieb for his birthday.

“That started when the Never Say Never movie came out, because I liked a girl and I asked her who she liked, and she said ‘Justin Bieber.’ I didn?t know who that was,” Starkel told Pig Trail Nation. “I went to the Never Say Never midnight premiere and it just kinda stuck with me ever since.”

Well, after his 28-of-50 passing day against San Jose State, including three touchdowns passes and a career-worst five interceptions, Starkel decided to trash his Justin Bieber shirt, saying in a tweet that there’d be “No more nonsense,” because a 21-year-old redshirt junior in college who loves Bieber wasn’t already ridiculous.

Bieber shirt has been ripped in half and thrown away. No more nonsense. No more distractions. All I’m focusing on is this team and this season. Nothing else. ✌🏼

I let my brothers, my family, my coaches, my University and the whole state of Arkansas down… I promise that we will respond.

RELATED: Justin Bieber Challenged Tom Cruise to a Fight, And Man, We Need This

So, what did The Bieb think about his T-shirt wielding superpowers getting dragged through the mud on social media by Starkel? The prince of pop posted Starkel’s tweet to his Instagram story with the caption, “I’m disappointed.”

Don’t be too disappointed, Bieber. You’re still worth about $265 million and sell millions of T-shirts to Beliebers around the world. I’m sure one destroyed cut-off won’t kill your momentum.

2019 hogs is Justin Bieber being disappointed at Nick Starkel for throwing away the game day Bieber shirt… what a time to be alive pic.twitter.com/hLCm5n6Wwq

Arkansas and the Texas A&M Aggies meet at AT&T Stadium on September 28. It’ll be Starkel vs. Mond in an SEC West showdown with Beliebers everywhere divided on whether Starkel still rides for the cause or not.

Arkansas Razorbacks quarterback Nick Starkel is actually beefing with Justin Bieber. What a time to be alive.

READ MORE: Texas A&M vs. Arkansas is a Must-See Game for Every Aggie