Auburns Fans Are So Fed Up with Malzahn, They’re Starting GoFundMe Campaigns 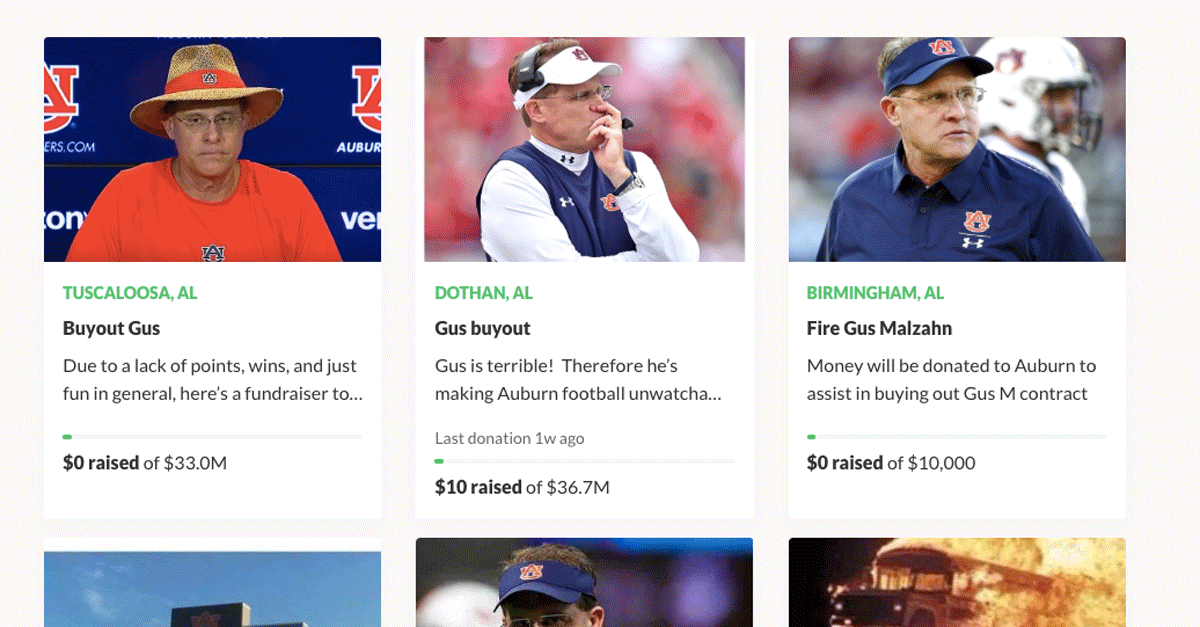 To put it kindly, Auburn fans are not taking this season’s losses well. Apparently, several fans have decided to start a GoFundMe accounts over the years to buy out head coach Gus Malzahn’s contract. His buyout would cost $32 million dollars as Malzahn just signed a seven-year contract extension last year after the Tigers finished the year 8-5. The chances are high that he isn’t going anywhere anytime soon… or at least that’s what most of us thought.

So far, of the 10 GoFundMe accounts opened, no money was raised, but the sentiment still stands. According to ESPN sideline reporter and former Auburn standout Cole Cubelic, Malzahn may be out the door if the Tigers don’t defeat Ole Miss Saturday. Auburn fans have always had a love-hate relationship with their head coach. It is the nature of the beast, but this time it may be different.

Fans are truly upset that Malzahn may not be eligible for a buy-out, at least not right now, which means several more years of a mediocre offense in sub-par seasons with no championships.

Related: Auburn’s SEC Championship Banner Already Has a Stain Thanks to Bruce Pearl

The reality is that most Auburn fans know they are stuck with Malzahn for awhile. As the SEC Network’s Paul Finebaum explained, per Saturday Down South, fans may just have to learn to deal with it.

?When the president of a university gives a coach a seven-year deal at that price, he?s very likely not going anywhere. That will not make him anymore popular. In fact, what I?m hearing from most Auburn people is that he?s certainly unpopular at the moment, but that?s the deal that you make and whether fans like it or not, they?re stuck with Gus Malzahn.?

That being said, you can screenshot this tweet. I will not mention another tweet about Auburn football until Gus Malzahn is fired. I love Auburn. I’ll always be an Auburn fan. But I am checking out until leadership is different. That is all. War Eagle.

As you can tell, Auburn fans are not exactly feeling Malzahn or quarterback Jarrett Stidham for that matter, so their feelings wouldn’t be hurt if Malzahn is fired in the near future.

Keep in mind, that a buyout wouldn’t be impossible for Auburn, just expensive and at this point, it might be cheaper to keep him. Unless one of these GoFundMe campaigns works…