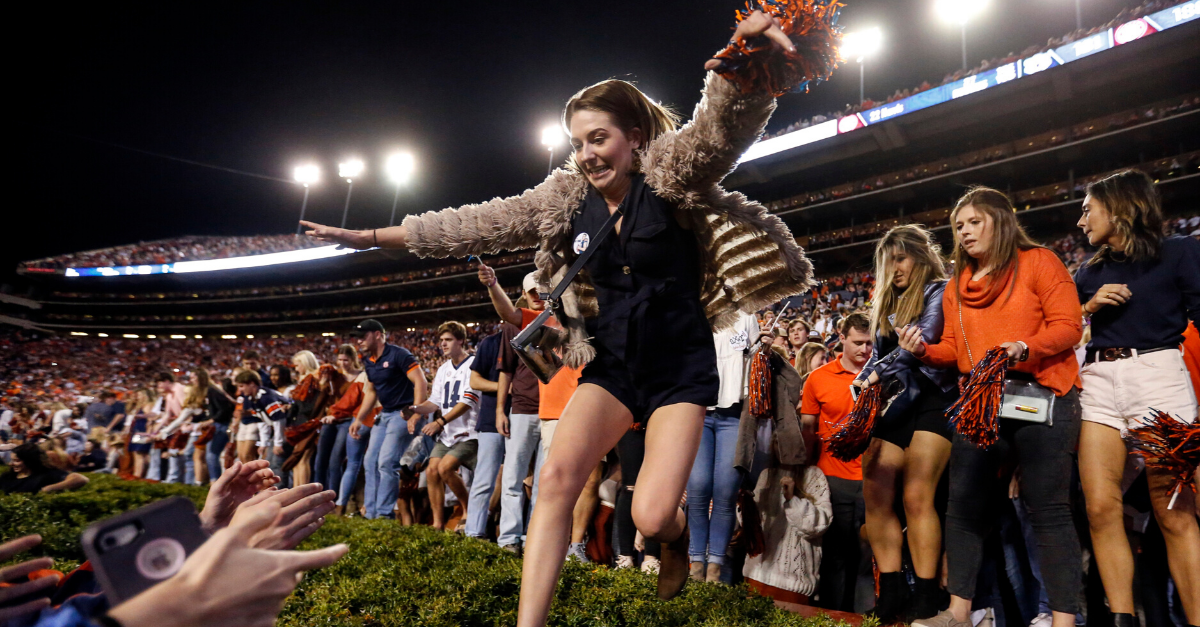 Storming the field is one of the all-time great traditions in college football. The practice is historically dangerous, as fans have been seriously hurt and even died from uprooting goal posts. Clemson fans ignore that warning every home game and sometimes fans walk away with epic souvenirs, like this LSU fan after the Tigers beat Georgia in 2018.

The practice is outlawed by the Southeastern Conference, where a school like Florida has never witnessed 90,000 fans spill onto the field in The Swamp. Still, it happens and it comes with a hefty price tag. LSU was fined $100,000 for their aforementioned rushing of Death Valley, but even that pales in comparison to what Auburn will have to pay for what transpired after this year’s Iron Bowl win over Alabama.

The SEC announced it was fining Auburn $250,000 after fans — including these two women who virally made hedges look like quick sand — stormed the field at Jordan-Hare Stadium following the Tigers’ 48-45 wild win over the Crimson Tide on Saturday.

The SEC announces Auburn has been fined $250,000 for allowing fans to storm the field. This is Auburn's 4th violation since the SEC banned storming the field.

Beating Alabama worth millions to Auburn, worth every penny for the Tigers.

Conference rules state that “institutions shall limit access to the competition area to participating student-athletes, coaches, officials, support personnel, and properly-credentialed or authorized individuals at all times. For the safety of participants and spectators alike, at no time before, during or after a contest may spectators enter the competition area. It is the responsibility of each member institution to implement procedures to ensure compliance with this policy.”

The fine, which will be paid into the SEC Post-Graduate Scholarship Fund, is one I’m sure the Auburn Tigers wouldn’t mind paying every other year. They most definitely shouldn’t mind this year considering AU head coach Gus Malzahn and Co. ended Alabama’s hopes for the College Football Playoff or even an SEC Championship Game berth.

An often furious Nick Saban had no answer for Auburn freshman quarterback Bo Nix or the rest of the offense. Nix threw for 173 yards, including one touchdown pass, one rushing touchdown and zero interceptions. Auburn running back Jatarvious Whitlow posted 114 rushing yards on 16 carries.

Auburn just beat the worst Bama team in 10 years and they’re storming the field lol. Literally couldn’t be me. pic.twitter.com/mr3BVTQsYv

Alabama signal caller Mac Jones, taking over for the injured Tua Tagovailoa, threw for almost 400 yards and four touchdowns but added two pick-sixes. One of them, which fell into the hands of linebacker Zakoby McClain, went for 100 yards.

Not even Alabama’s dangerous receiver Jaylen Waddle, who returned a kickoff for a 98-yard score and added three touchdown receptions, or future NFL running back Najee Harris, who ran for 146 yards and a score, could outpace Auburn.

Alabama had too many men on the field late in the fourth quarter and was flagged for an illegal substitution, which gave Auburn a first down on fourth-and-4 and sealed the win.

“I really feel that it was a pretty unfair play at the end of the game,” Saban told ESPN. “They substituted the punter as a wide receiver, so we put the punt team in. And then when the quarterback was still in there we tried to put the defense back in. I thought they should have given us a little more time to substitute and get [Jaylen] Waddle out as a returner. We get called for 12 guys on the field. So that was very disappointing.”

Saban also complained about the officials’ decision to put one second on the clock before halftime following an Auburn first-down at Alabama’s 34-yard line. Tigers kicker Anders Carlson nailed the 52-yard field goal, which pulled Auburn within four points of the Tide to end the first half.

Regardless, Auburn had more points when the game clock struck zero, and that’s all Auburn fans cared about as they rushed the field.

This isn’t the first time Auburn football has been fined $250,000 for allowing fans to storm the field.

The SEC fined the school the same amount two years ago when the Tigers beat Alabama in the 2017 Iron Bowl and pandemonium shifted from the stands to the field.

Overall, this is the fourth time Auburn University has been fined for such an event. The first came after the Kick Six Iron Bowl in 2013 and the second when Auburn men’s basketball upset Kentucky at home in 2016. It’s the first time the school has been fined for Auburn fans rushing the field under athletics director Allen Greene.