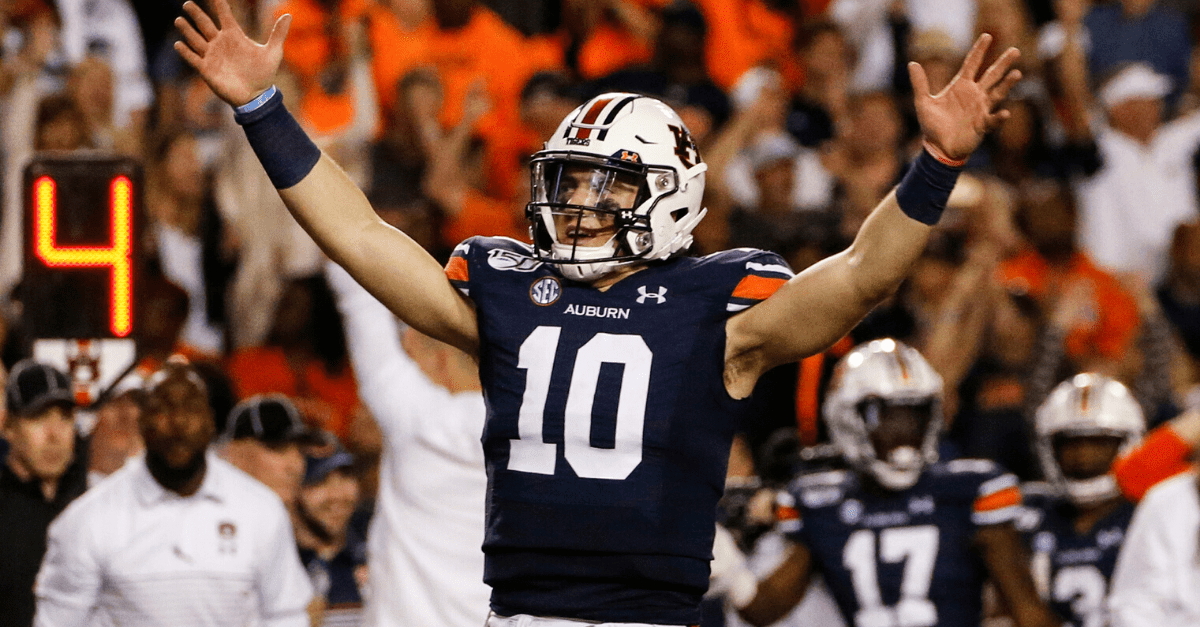 When Auburn Tigers freshman quarterback Bo Nix arrived on campus at Auburn University, he carried the weight of being a prized recruit and the top-rated dual-threat quarterback in the 2019 class. He had huge footsteps to follow in. His dad, Patrick Nix, was Auburn’s starting signal caller in 1994 and 1995.

Heck, he’s even named after the great Bo Jackson. He was destined to be Auburn’s next great quarterback.

Some college football players would’ve cracked under that type of pressure. Bo Nix, however, is not like other NCAA freshmen. He started the season opener against the Oregon Ducks, becoming the first true freshman quarterback to start a season opener at Auburn since Travis Tidwell in 1946. He then promptly navigated the Tigers to a 9-3 record despite facing a gauntlet of SEC teams.

On Wednesday, the SEC announced conference accolades and Nix was awarded SEC Freshman of the Year honors. He’s the third Auburn player to ever win the award and first since wide receiver Ronny Daniels won it in 1999. He also joins a list of quarterbacks that includes Peyton Manning, Danny Wuerffel and Johnny Manziel. Auburn defensive lineman Derrick Brown took home SEC Defensive Player of the Year honors.

The Tigers couldn’t have asked for much more out of their first-year player under center.

Nix threw for 2,366 yards and 15 touchdown passes this season. He rushed for another 301 yards and seven more touchdowns.

Despite rough patches, like throwing three interceptions in a loss at Florida and falling just short against LSU and the Georgia Bulldogs, the highlight of Nix’s season was a signature win over the Alabama Crimson Tide in the Iron Bowl. He threw for less than 200 yards but scored two touchdowns in the 48-45 victory that resulted in Auburn fans rushing the field and incurring a $250,000 fine by the SEC.

Nix led the Tigers to eight other wins — Oregon, Tulane, Kent State, Texas A&M, Mississippi State, Arkansas, Ole Miss, Samford and Alabama — and will get a chance to win his 10th game as a freshman as No. 12 Auburn squares off against No. 18 Minnesota in the Outback Bowl on New Year’s Day.

Nix’s season was about growth. It was about getting comfortable and learning how to play quarterback in the SEC.

“I think you see him getting more comfortable every game and every snap,” Auburn head coach Gus Malzahn said after Nix totaled 335 passing yards against Mississippi State and won SEC Player of the Week. “The game gets slower, and he was really accurate with his throws. He made some very good throws on intermediate and deep routes. He hurt them with his feet. Anytime a quarterback can hurt you with his feet and throw like he did tonight, that’s a good thing.”

There’s no doubt that Auburn football is in good hands with Bo Nix. With at least two more years left, hopefully Nix can take home SEC Offensive Player of the Year and lead the Tigers to an SEC Championship Game and College Football Playoff berth.

MORE: Bo Nix Was Born to Be the Auburn Tigers? Starting Quarterback