Last week, Auburn relieved Bryan Harsin of his head coaching duties after posting a 9-12 record in one-and-a-half seasons. Now, the first trace of smoke has risen out of The Plains.

While Ole Miss' Lane Kiffin, Liberty's Hugh Freeze and Jackson State's Deion Sanders have emerged as potential candidates, none of them were the first name to gain traction. 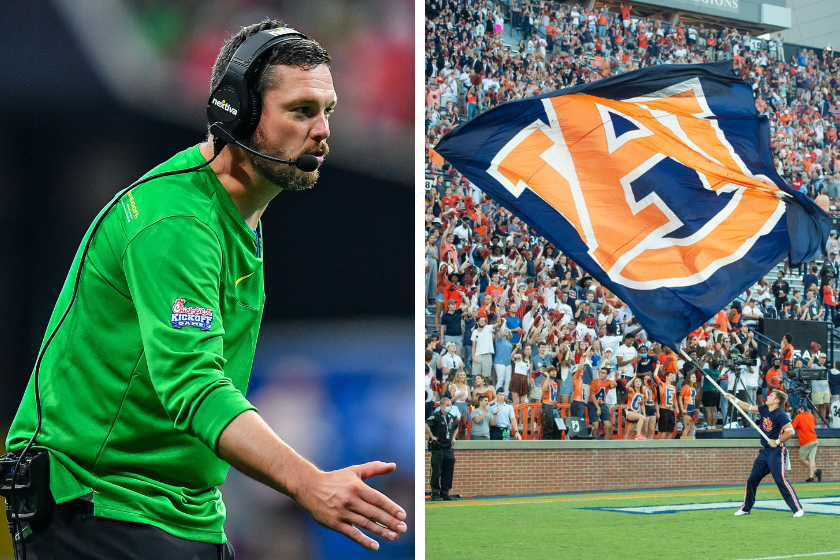 According to Sports Illustrated's Lance Dawe, Auburn and Lanning reportedly have mutual interest and have been in contact. The Oregon head coach might be using this as a way to lock up an extension to stay in Eugene, though.

Lanning inked a six-year, $29.1 million contract when Oregon hired him last December, making him the fourth-highest paid in the Pac-12 and 32nd highest in all of college football. The Ducks started off the season with a brutal 49-3 beating at the hands of Georgia, but they've notched seven straight wins and are in driver's seat of the Pac-12. Quarterback Bo Nix, who Auburn fans know a thing or two about, is a big reason for the turnaround. He's thrown for 2,495 yards and 22 touchdowns against five interceptions and made himself a dark horse Heisman candidate.

Lanning is making $4.6 million this season, and his salary is set to increase $100,000 each year of his contract. However, Oregon's noticeable improvement should be enough to make the athletic department want to further invest in their head coach--as Lanning's two predecessors, Willie Taggert and Mario Cristobal, bolted for Florida State and Miami, respectively, before the end of their contracts.

Reports of a sitting head coach being interested in another job doesn't leak unless one camp wants it to. Lanning wants to be paid like one of the best coaches in the country, and Oregon should pull out the checkbook to avoid searching for their fourth head coach in five years. Also, he would have to pay $14 million to get out of his contract if he chooses to leave before the end of 2023. I doubt he would want to fork over a hefty chunk like that. For reference, Cristobal paid $9 million to take the Miami job.

That being said, Lanning would be a solid hire. The 36-year-old has only been a head coach for nine games, but he has experience in the SEC. He was the defensive coordinator of Georgia's historic defense last season and served as a graduate assistant at Alabama during the Crimson Tide's 2015 national championship run. Being a branch of the Nick Saban and Kirby Smart coaching tree is attractive experience in itself, but Lanning has proven he has head coaching chops thus far.

He can recruit, too. His first recruiting class at Oregon was the 13th best in the country, and his 2023 class is currently ranked 11th.

Take the mutual interest for what you will, but the Auburn coaching search is already in full swing.