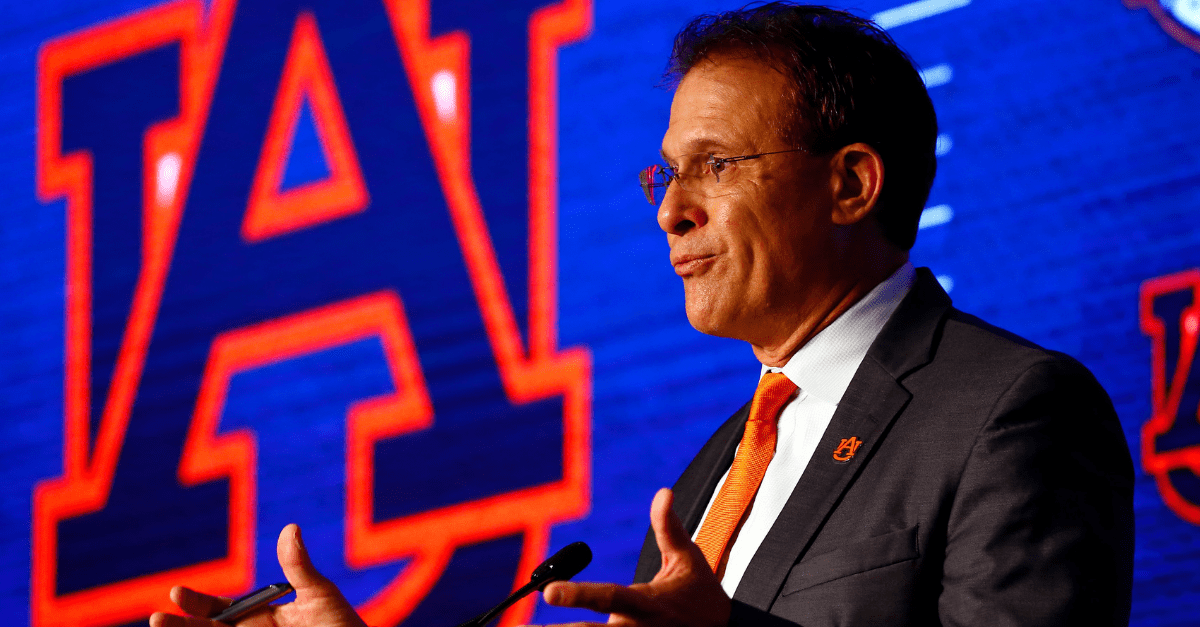 If it were up to Auburn Tigers fans, they would be celebrating every college football season like they did when quarterback Cam Newton won the Heisman Trophy and led the program to the BCS National Championship. Really, that?s every fan base?s dream, but Auburn would definitely rather run out of toilet paper for Toomer?s Corner than to throw a party for mediocrity.

When head coach Gus Malzahn took over for Gene Chizik, he knew the job he was taking and the pressure to win that comes with it. So far, it hasn?t exactly been a dream for either side.

In six seasons at the helm, Malzahn is 53-27 overall, including 28-20 in the SEC. He?s the only active SEC coach to have beaten Alabama Crimson Tide head coach Nick Saban, and has a pair of double-digit win seasons, but a couple average seasons and a losing record in the postseason have fans worried.

Needless to say, the Auburn coach knows about the hot seat far too well.

While Auburn Tigers head coach Gus Malzahn is trying to figure out if Joey Gatewood or Bo Nix will replace quarterback Jarrett Stidham this season, the rest of the college football world is wondering whether or not the veteran head coach is really coaching for his job this year.

Yes, the schtick of Malzahn being on the hot seat is old and repetitive, but where there?s smoke, there?s generally fire. He feels it, too.

First and foremost, that?s definitely coach-speak. It?s always that at SEC Media Days in front of a national audience. However, the timing of the question proves how much pressure Malzahn has to win right now.

After Malzahn?s opening statement, that was the first question asked. The very first question. It had nothing to do about the quarterback race or how good his team might be in the SEC. It had everything to do the dealing with the pressure of having his job potentially in jeopardy each and every season.

That?s not exactly promising. Then again, neither has his tenure.

After guiding the Tigers to a SEC Championship Game victory over Missouri in his first season before losing to national title game to Florida State in 2013, Malzahn?s time has been nothing short of a rollercoaster.

The Tigers won eight games in 2014, but lost the Outback Bowl to Wisconsin. They won seven games during a disastrous 2015 season, but won the Birmingham Bowl over Memphis. The next two regular seasons ended with eight and 10 wins, respectively, but both ended with losses in the Sugar Bowl to Oklahoma and Peach Bowl to UCF.

Auburn finished last year in the Plains with an 8-5 mark, which was only good enough for fifth in the SEC West, but earned a Music City Bowl game win over Purdue.

Only time will tell how long the Gus Malzahn Era lasts at Auburn, but it?s also time for the veteran NCAA football coach to start piling up some wins doing the play-calling at Jordan-Hare Stadium or it might be quicker than we even think, despite his insane buyout and NFL talent he pulls in each year.

Honestly, it might have to be Atlanta or bust or this will be Malzahn?s last season and changes will be made next year during the offseason.