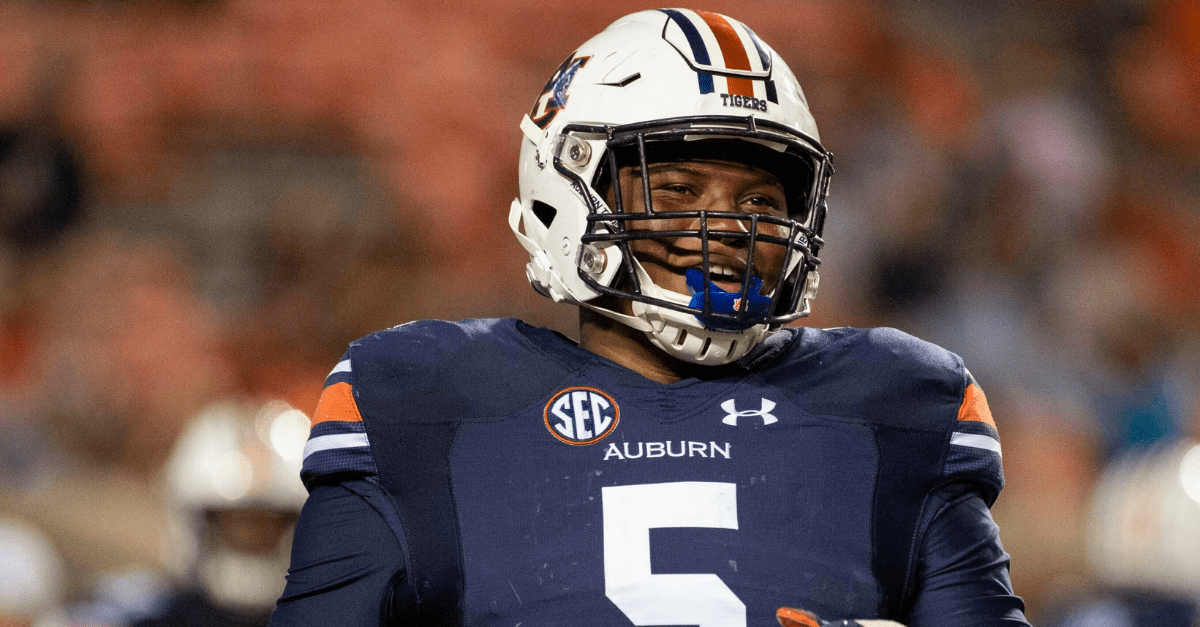 Start a discussion with your friends about who the best player in college football is. Without a doubt, you’ll all likely jump on the quarterback bandwagon, throwing out names like Trevor Lawrence, Jake Fromm, Tua Tagovailoa, Justin Herbert and Jalen Hurts. Maybe even a few running backs ? Wisconsin’s Jonathan Taylor or Clemson’s Travis Etienne ? will sneak their way in.

But for me, someone groomed as an offensive and defensive lineman from an early age, the best player on the field is typically one of those big hogs who casual football fans hardly notice. In 2019, none of them will be as polarizing as Auburn defensive tackle Derrick Brown.

For starters, Derrick Brown didn’t just fall from the sky. The Lanier High School standout was named MaxPreps National Player of the Year ? usually given to offensive studs like Kyler Murray and Tate Martell ? after finishing with 106 tackles and 13 sacks as a senior defensive tackle. He was named Georgia Sports Writers Association Player of the Year, a USA Today All-American, and was a unanimous five-star prospect by every major recruiting website.

At that point, you probably weren’t watching him.

Brown played all 13 games as a true freshman for Auburn, 14 more as a sophomore, and all 13 last season as a junior. The three-year starter owns 115 total tackles, 21.0 tackles for loss, 9.0 sacks and three forced fumbles so far in his career. Last year, he was a Nagurski Trophy (NCAA’s top defender) and Outland Trophy (best interior lineman) Preseason Watch List member, as well as one of three finalists for the Jason Witten Collegiate Man of the Year award.

The Sugar Hill, Georgia native was a Second-Team All-SEC performer in 2018, yet you were more focused on drama with Gus Malzahn and Jarrett Stidham.

This season, the 6-foot-5, 318-pound defender won’t be hiding in the shadows anymore.

“Derrick Brown is an unbelievable talent. He’s the one that jumped out. I mean I circled him in just about every game I saw. Derrick Brown, Derrick Brown, I’m looking at the circles, he is a guy that definitely jumped off the page… He’s got rare, rare talent.”

You’re going to hear all about Auburn football’s dominant defensive line in 2019. Junior Nick Coe will likely be a first-round pick in the 2020 draft. Senior Marlon Davidson could’ve been drafted last year, but the SEC’s leader in blocked field goals (3) is back again, ready to add to his 126 career tackles.

But if Derrick Brown continues on his current trajectory, he could outshine them all and be the first defensive player taken in the 2020 NFL Draft.

A powerful first step, violent hands at the line of scrimmage, and elite decision making makes Brown one of college football’s must-watch players in 2019, and he’ll likely be in the conversation for numerous All-American honors before his time on The Plains is over. Being tutored by long-time defensive line coach Rodney Garner, who’s produced NFL talent like Dee Ford, Gabe Wright, Montravius Adams and Carl Lawson, is only making Brown more and more enticing at the professional level.

Ohio State’s Chase Young, Iowa’s A.J. Epenesa, and Alabama’s Raekwon Davis are all in the discussion as top-10 draft prospects among defensive lineman, but they could all be looking up at an Auburn Tiger by the time next April rolls around.

Derrick Brown’s already been named to Sporting News‘ Preseason All-American team, but you can be sure that won’t be the last time he’s mentioned among college football’s best.

READ MORE: Quarterbacks Shine in Auburn’s Spring Game, But Who Will Start in 2019?