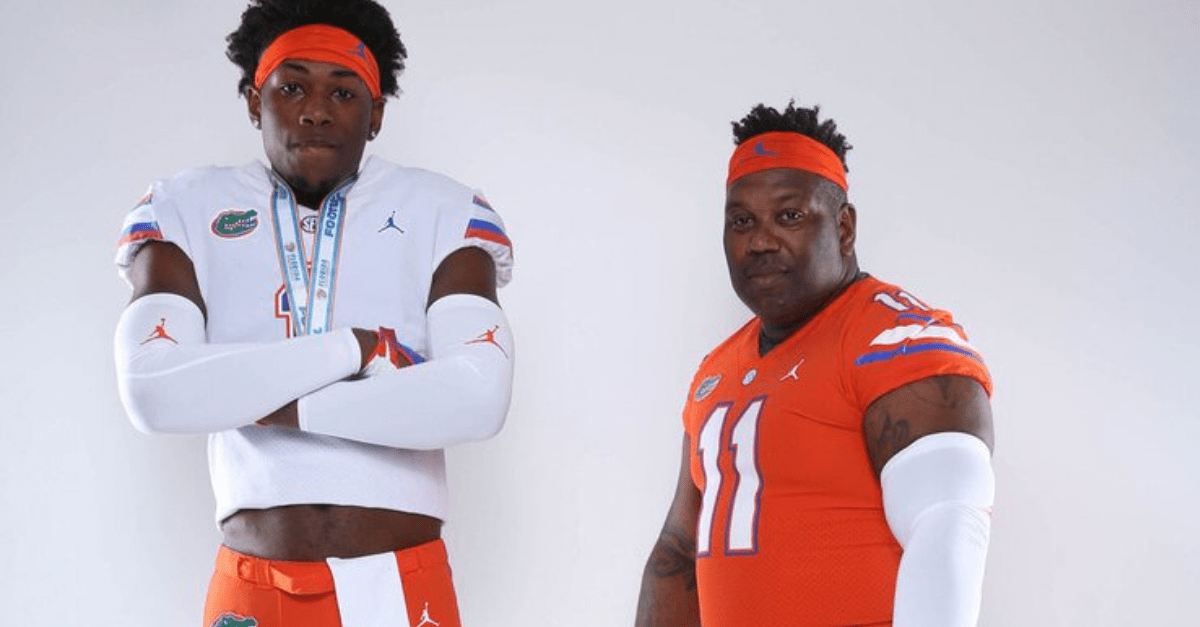 When head coach Dan Mullen came to the University of Florida, he came with intentions to dominate the state and return the Gators to their former glory. That all starts on the recruiting trail, and Mullen may have secured the most highly-anticipated recruiting visit of the decade.

When four-star defensive end Lloyd Summerall III made his official visit to the Gators program, you can guarantee Mullen buzzed over the chance for one of Lakeland, Florida’s premier players to join his program next season. However, when the 46-year-old head coach saw Summerall’s dad walk into the room, his attention quickly flipped, and we have been graced with the best recruiting photos of all time.

As all recruits do, schools will have gear ready for a photo shoot with the prospects wearing the team uniform. When it was Lloyd Summerall’s turn to carry on this tradition with the Florida Gators, his dad decided it was his time shine, too.

“Man, you look pretty swole,” Dan Mullen had told Lloyd Summerall. “You probably need to go ahead and put on a whole uniform.”

The moments captured next will forever be a testament to “re-living the old glory days,” and it might have earned the elder Lloyd Summerall a chance to sneak out his own scholarship offer in the process.

Alright, so maybe Lloyd Summerall won’t take his son’s place at UF, but you know that this photograph is going to hang on the Summerall’s family refrigerator for the rest of time.

“All the recruits were right there, so they had everything accessible. All the sizes for anybody. Anybody could have fit in it that day. Every parent already had on shirts. So I took it a step further. I had to one-up everybody.” — Lloyd Summerall, via The Athletic

All dad jokes aside, Lloyd Summerall III is one of the best high school recruits in Florida and adding him to the Gators’ 20th-ranked recruiting class is huge for Dan Mullen’s first full batch of prospects during his tenure.

At 6-foot-6 and 210 pounds, Summerall is the ranked as the No. 15 weakside defensive end for the 2019 recruiting cycle by 247Sports. In his senior season, Summerall helped lead the Lakeland Dreadnaughts to the school’s seventh Florida state championship, which capped a perfect 15-0 campaign. He held multiple Power 5 offers including, Alabama, Arkansas, Florida State, Georgia, Miami (FL), Michigan, Nebraska and Tennessee.

The official visit was all about locking up one of the top high school players in Florida to Gainesville, but we might have just seen a shocking new trend begin in the process.

When football recruits visit schools from now on, you know that more of the boldest dads in the country are going to follow Lloyd Summerall’s epic example and gear up in full uniform one last time.