Florida RB Poops Pants, Calls It “Best Thing That Could Have Happened” 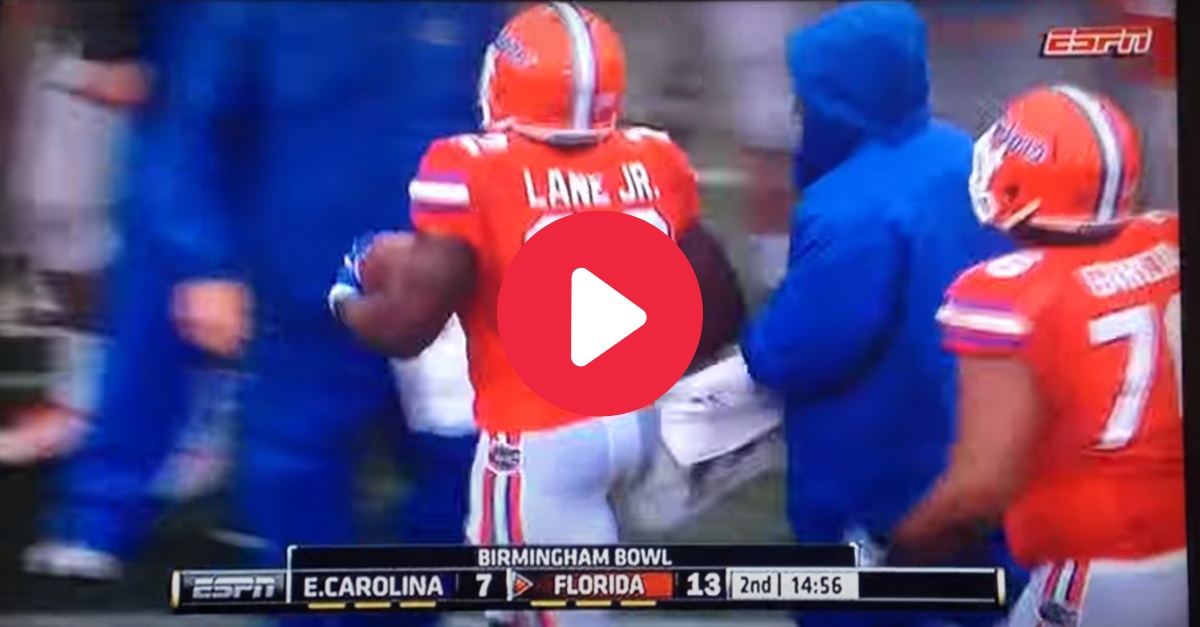 I don’t know how to tell you this, but athletes piss and poop themselves a whole lot more than you might think. You would too if you were about to pitch in front thousands of fans at a baseball game like Archie Bradley, who admitted to crapping before firing fastballs. Fans even once speculated if Dak Prescott dumped in his trousers during a football game at Mississippi State.

Desperate times call for desperate measures, which is why Oregon changed the game with a sideline pop-up toilet for players to do their business in. The Kansas City Chiefs took it a step further and began tossing footballs at players while in port-a-potties for the oddest drill of all time. That’s why they call it the National Feces League, right?

Terrible jokes aside, these moments are usually embarrassing. One college football player, however, said pooping his pants in the middle of the game AND going viral for it was a blessing in disguise.

Florida Gators running back Adam Lane impressed at the Birmingham Bowl in 2015. He rushed for 16 times and gained 109 yards against East Carolina, earning him MVP of the game.

When he took off his pads after the game, he found out what the ‘P’ in MVP really stood for. A few plays before scoring a touchdown during the game, the 5-foot-7 running back full-on pooped his pants. Viewers took notice and pictures and videos circulated on social media.

It was VERY obvious, too.

✔ Wow…Florida freshman running back Adam Lane crapped his pants during his TD run at the Birmingham Bowl today … pic.twitter.com/CXkJiUvebd

RELATED: The Chiefs? Port-A-Potty Drill Is The Crappiest Drill Ever

#ThisIsCrap. Interesting. Never seen that hashtag. The cool part is that teammates and coaches cover him up with a towel, because no one wants to see or smell that.

Anyway, most players would’ve been embarrassed about something like this. Not Lane, who had himself a career game against ECU. In fact, he said the pants-pooping incident was a positive.

“It was the best thing that could have happened,” he told 247Sports. “It got a lot of attention and just put me in a place where I was out there publicly and people knew who I was. I really didn’t get a lot of grief from it.

“A lot of people were really more focused on how well I did in the game more than anything. I feel like it was that way because I embraced it.”

Mad respect to Adam Lane. The average person probably wouldn’t have handled that so well. Unfortunately, that was the last game he played in the NCAA. He reportedly skipped out on a tab at a bowling alley and transferred to Eastern Kentucky after the 2014 season but never recorded a snap or played in a game, according to Sports-Reference.

Now, he’ll forever be remembered in Florida lore as the player who pooped his pants.