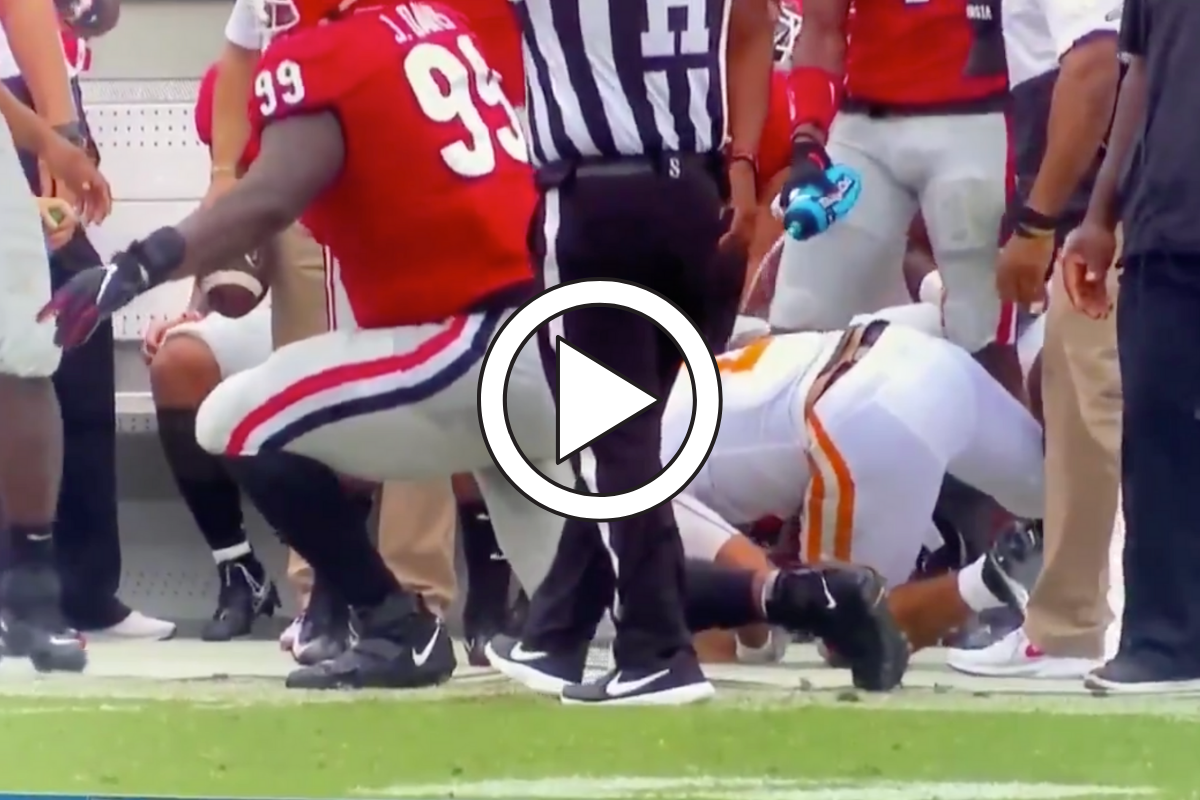 The Georgia Bulldogs are a damn good college football team. No matter who they play, they will be a tough out. There?s no doubt head coach Kirby Smart has a strong set of standards for his roster, but they are far from perfect, and this latest penalty is proof.

A SEC showdown against the Tennessee Volunteers proved to be a solid test for the Dawgs at Sanford Stadium in Athens. After a rough first half, UGA quarterback Stetson Bennett got the offense rolling, while the defense completely shut down the Vols attack in the second half.

There?s a lot of good to take away from the 44-21 win on Saturday afternoon, but you better believe wide receiver George Pickens got a stern talking to after his unsportsmanlike conduct penalty for squiring water on Tennessee quarterback Jarrett Guarantano in the second quarter.

The play was a simple 3-yard run out of bounds for Tennessee. It was just a small gain and not really a big deal at all. Then, for whatever reason, Georgie wide receiver George Pickens decided it would be a good idea to spray his water bottle on Tennessee quarterback Jarrett Guarantano.

The result of the play was a 15-yard penalty and a first down. Tennessee went on to score on a 27-yard touchdown pass to Josh Palmer and take the lead with just over three minutes to play before halftime.

Smart, understandably so, was not happy with Pickens.

?It?s just disappointing. It?s silly behavior. It?s immature,? Smart said after the game. ?Just like two guys running down to celebrate with Jalen Carter. That cost us a Tennessee game already once. What are we thinking? We show that once a year to talk about when your buddy scores, celebrate on the sideline with him. When somebody comes out of bounds and you squirt water at him, what are we? Are we seven, eight years old? I mean, come on. Let?s play football. Let?s don?t be silly.?

This isn?t the first time Pickens has been in trouble during his NCAA career. He was ejected for fighting against Georgia Tech last year and missed the first half of the SEC Championship Game against LSU.

A penalty like this wasn?t a huge deal against Tennessee, but it might be costly against the likes of the Alabama Crimson Tide next weekend with ESPN?s College GameDay in Tuscaloosa.

These things simply can?t happen if Georgia is serious about getting back to the College Football Playoff in this unpredictable season during the COVID-19 outbreak and they can be easily prevented.

MORE: How Did Stetson Bennett Earn His ?Mailman? Nickname?