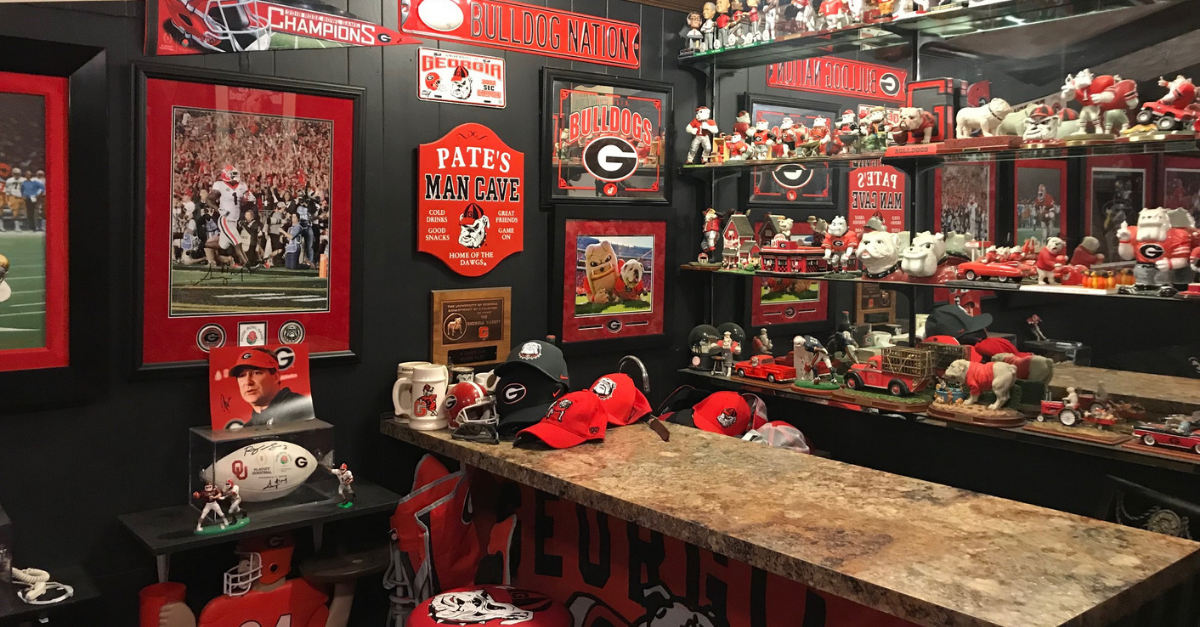 I’ve seen quite a few incredible man caves in my day. I remember meeting a friend’s grandfather who had been collecting Penn State Nittany Lion autographs, bobbleheads and memorabilia for most of his life. Everywhere you looked, blue and white PSU gear was right in your face. To be honest, I really never thought I’d see another collection like it.

Shane is a Federal Law Enforcement Officer who is originally from the middle of Georgia. Today, Shane and his wife Amanda live in Montgomery, Alabama. Almost directly in the middle of Alabama Crimson Tide and Auburn Tigers country, it’s not exactly the place you’d think to find the greatest collection of Georgia Bulldogs gear on the planet.

“[I’ve] been a big Dawg fan all of my life, and I have really worked hard on putting a terrific, hard to find collection together,” Shane tells FanBuzz. “The majority of my items are no longer made and very hard to find.”

The pride and joy of Shane’s collection though? That was an easy question to answer.

“My favorite piece is probably my Daniel Moore Tribute to the [1980] National Championship, artist proof canvas number 10 of 10, signed by Herschel Walker,” Shane tells us. “Favorite [player] had to be Herschel Walker the goal line stalker, but there is quite few at the top.”

It’s an absolutely unrivaled collection of Georgia Bulldogs moments and autographs, including a signed photo from Sony Michel, an autographed Roquan Smith jersey, and even a painting of Lorenzo Carter’s game-saving field goal block against Oklahoma in the 2018 Rose Bowl.

Shane is confident his incredible collection of Georgia Bulldog figurines is the best you’ll ever find, too.

“I?m big on the UGA figurines. I think I have the best collection out there,” Shane says. “I was never big on game worn items, plus [there are] so much fraudulent pieces. It?s just not my thing.”

To top it all off, Shane’s Georgia Bulldogs pool table, UGA rugs and lights, and even a life-sized Kirby Smart cut-out complete the greatest man cave I’ve ever seen.

Do you have a man cave that could compete with Shane’s? Reach out to us and we’ll feature YOUR ultimate team sanctuary on FanBuzz!

This post was originally published on May 3, 2019, but dawg caves like this never go out of style.

READ MORE: Prep for Georgia Football with This Classic Red and Black Gear