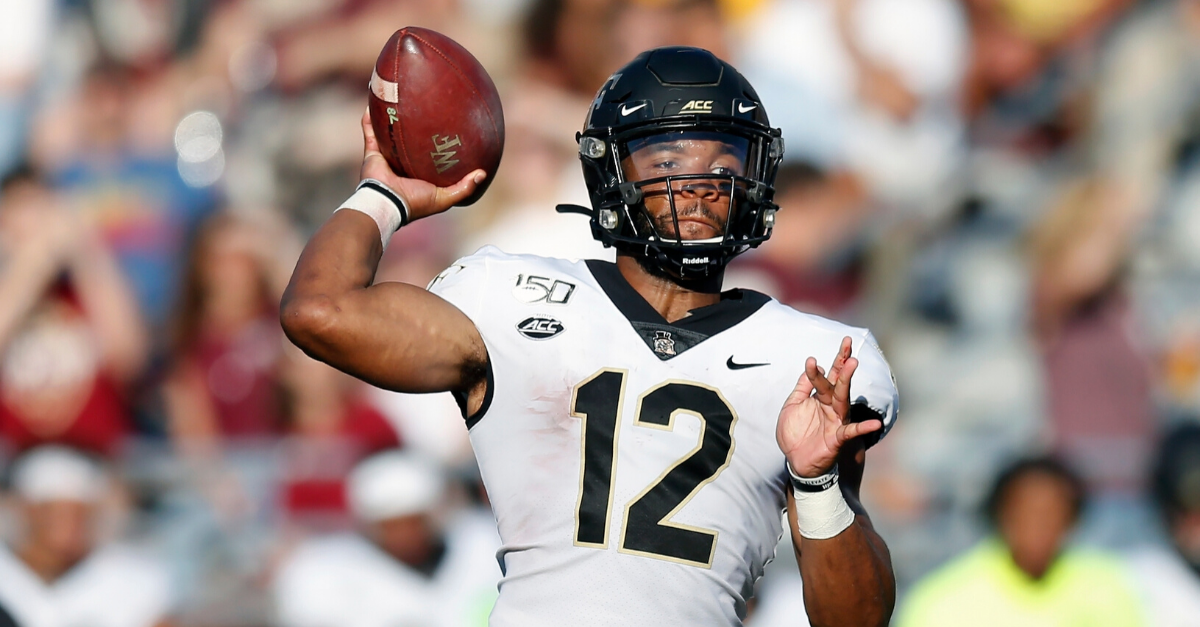 Jake Fromm was the heartbeat of the Georgia Bulldogs for the last three seasons. The quarterback led UGA to the College Football Playoff championship game in 2017 and Sugar Bowl berths each of the last two years, and left as one of the program’s all-time passing leaders.

Fromm said goodbye to Kirby Smart and the Bulldogs in a heartfelt letter as he pursues his NFL dreams. That left Georgia having to fill his shoes to stay competitive against SEC teams like Florida, Alabama, Auburn and LSU. UGA fans can rest easy now, though.

Former Wake Forest quarterback Jamie Newman announced his intention to enroll at the University of Georgia as a graduate transfer, giving Smart an elite-level quarterback to take the Bulldogs back to Atlanta for the SEC Championship Game.

“I would like to thank the Lord for guiding me through this journey. After careful evaluation, and guidance from my family, I have decided to enroll at the University of Georgia as a graduate transfer.

Most importantly, I am ready to get to work, ready to make new friendships and committed to contributing to this great program. UGA and Coach Smart thank you for this amazing opportunity.

This journey will surely be one that I will never ever forget! #GoDawgs #GodsPlan”

Newman was a breakout player for the Demon Deacons and the ACC’s best passer not named Trevor Lawrence during the 2019 season. The 6-foot-4 dual-threat quarterback threw for 2,868 passing yards and 26 passing touchdowns while running for 574 rushing yards and another six rushing touchdowns.

He threw for a season-high 401 yards against Utah State and rushed for 144 yards against Duke. Though Wake Forest fell to Michigan State, 27-21, in the Pinstripe Bowl, Newman threw for three touchdowns and one interception.

Pro Football Focus ranked Newman the No. 3 returning college football quarterback behind Clemson’s Trevor Lawrence and Ohio State’s Justin Fields, and the reason is not his legs. From PFF:

“The tight-window passing he has put on display has been next level and a large reason why he is highly sought after on the transfer market. Joe Burrow is far and away the highest-graded quarterback throwing to a tight window, but Newman is second ? and third isn?t anywhere near him. He also limited his uncatchable pass rate to the fourth lowest.”

Former Georgia coach Mark Richt even took to social media to voice his pleasure with the announcement:

I have been watching Jamie Newman all season with the ACC network. Georgia just landed a great one! I predict he will be the best quarterback in the SEC! Go Dawgs!

With Fromm declaring for the NFL Draft, the starting job in Athens is now Newman’s to lose. The Bulldogs have three other scholarship quarterbacks in former walk-on junior Stetson Bennett, redshirt freshman D’Wan Mathis and early-enrollee freshman Carson Beck, but expect Newman to be the starting quarterback come Fall.

The Graham, North Carolina, native was a former three-star prospect out of high school and considered transferring to Maryland, Miami, Oregon and Washington, according to ESPN. Newman entered the NCAA transfer portal on Dec. 31, 2019.

This article was originally published January 13, 2020.

UPDATE (January 28, 2020): The Westgate Superbook in Las Vegas released its 2020 Heisman Trophy odds, and the Dawgs were well represented. Running back Zamir White (80/1) and wide receiver George Pickens (100/1) made the cut, but it was Newman who led the pack.

Newman Opts Out of 2020 Season

UPDATE (September 2, 2020): Georgia’s projected starting quarterback, Jamie Newman, is opting out of the 2020 season due to COVID-19 concerns, according to Yahoo Sports’ Pete Thamel and Newman on Twitter. Newman will train for the 2021 NFL Draft instead of playing out the season with the Bulldogs.

“With much prayer and discussion with my family I would like to announce that due to the uncertainties of this year amid a global pandemic I will officially opt-out of this football season to prepare for the upcoming 2021 NFL draft. I would like to thank Coach Smart for extending the opportunity for me to be a part of the University of Georgia football program. Although my time has been short I’ve built some great relationships and I’ve had a chance to continue my development. As I prepare for the journey ahead, I remain hopeful and excited about what the future holds especially during these challenging times in our world. #Grateful #GodsPlan,” Newman posted on Twitter.

Newman, who transferred from Wake Forest to Georgia after a stellar 2019 campaign, was likely going to win the starting job in Athens. Former USC Trojans quarterback J.T. Daniels transferred after Newman to throw his name in the mix, and he now has a clear path to becoming QB1 for Kirby Smart.