The last game that defensive tackle Jordan Davis played in was a victory in the CFP National Championship against Alabama.

Now he will become one of the building blocks of an NFL franchise that hopes using a first round pick on him will translate to another championship run.

What made Davis such an impactful run defender in one of the best ever defensive lines in college football is his sheer size. He is 6-foot-6 and weighs 341 pounds with a wingspan of over 81 inches. He is a gap-filler who is impossible to run against, and he forces offensive linemen to double team him, opening up the opportunity for his fellow linemen and linebackers to get to the quarterback or the running back. 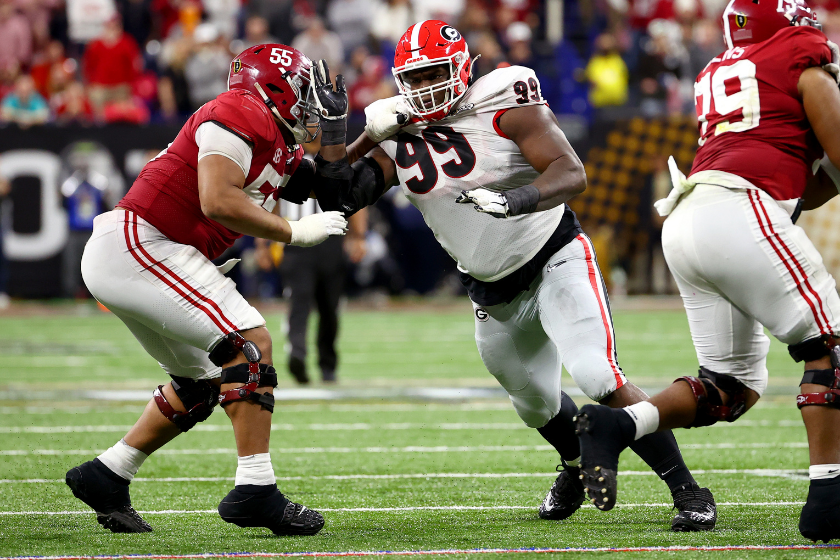 After growing up in Charlotte, North Carolina, Davis was actually a high school basketball player at Hopewell High before he transferred to Mallard Creek High School and began to play football in his junior year.

Despite having just two years under his belt, Davis had offers from several power-five schools including Clemson, Florida, Miami (FL) and North Carolina, but he chose to commit to Georgia, where he would be teamed with fellow 2022 NFL Draft prospects and potential first round selections Travon Walker, Devonte Wyatt and George Pickens.

As a true freshman, Davis played in 11 games and registered 25 tackles and 1.5 sacks. He was named All-Freshman by the SEC and was selected by the Football Writers Association of America (FWAA) as a Freshman All-American.

In his sophomore season in Athens, Davis started eight games and continued to build his resume as the anchor of the run defense. He registered four tackles for a loss as the Bulldogs became the top defensive unit against the run in the nation. His junior season saw him earn second-team All-American recognition and second-team All-SEC at nose tackle. In the team's game against Tennessee, he was rewarded for his leadership with the team captaincy.

The expectation was that Davis would enter the NFL Draft in the offseason following his junior year at Georgia. However, citing "unfinished business", the lineman announced on social media that he was coming back to Georgia for his senior season. That unfinished business, bringing a national championship to Athens, would be the pinnacle of his college football career with the Bulldogs.

With Davis as a massive (literally) part of the defensive line, the Bulldogs upset #2 Michigan in the Orange Bowl and then defeated #1 Alabama in the CFP National Championship in Indianapolis.

In addition to earning himself a championship ring, Davis supremely improved his spot in the NFL mock draft rankings. He set career-highs for tackles (32) and tackles for a loss (5.0) and won the Outland Trophy (Best Interior Lineman) and the Chuck Bednarik Award for the best defensive player in college football.

The Scouting Report on Jordan Davis 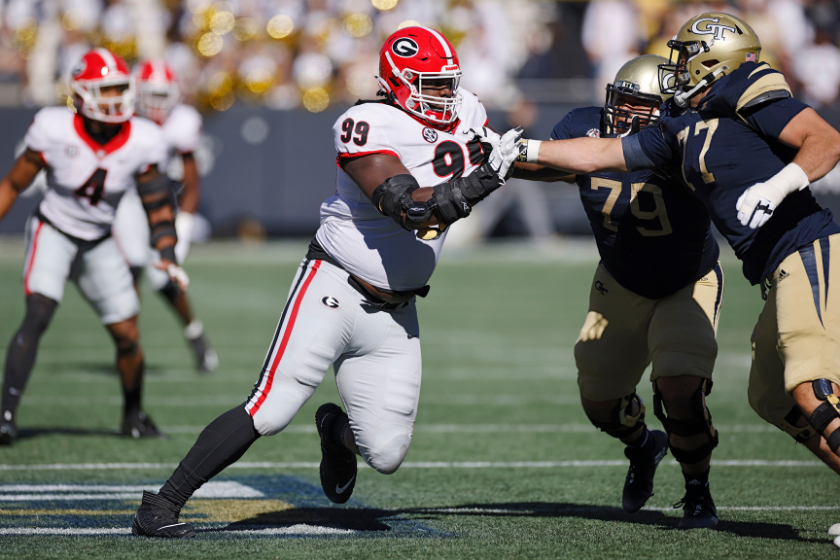 We've already mentioned the size and strength that Davis brings as a nose tackle or defensive lineman. But his quickness is what makes Davis's NFL Draft profile such a rare combination of talent.

At the NFL Scouting Combine, Davis ran the 40-yard dash in a blistering 4.78 seconds. Keep in mind, he weighs 340 pounds.

For comparison, his teammate Devonte Wyatt, who weighs just over 300 pounds, ran the 40-yard dash in 4.77 seconds, and that was a phenomenal speed for someone his size. Davis can move.

Though he is a dominating run stuffer, the questions about Davis are whether he has the ability to stay on the field for three downs and become a high-end pass rusher as well. He only played about 50% of the snaps at Georgia, where, despite the fact that the Bulldogs could rotate an embarrassment of riches, they took him off the field on passing downs. He only has 30 QB pressures in his four years and played just over 1,100 snaps in his entire college career.

With his massive frame, Davis does gobble up blockers, forcing double teams and allowing his teammates to shine. He can bull rush off the line of scrimmage and push back blockers at a next level rate. He is no doubt an immediate difference maker in the run game, but, NFL teams will look for him to be more productive in the pass rush than the seven sacks that he recorded over four seasons at Georgia.

Where is Davis Going in NFL Mock Drafts? 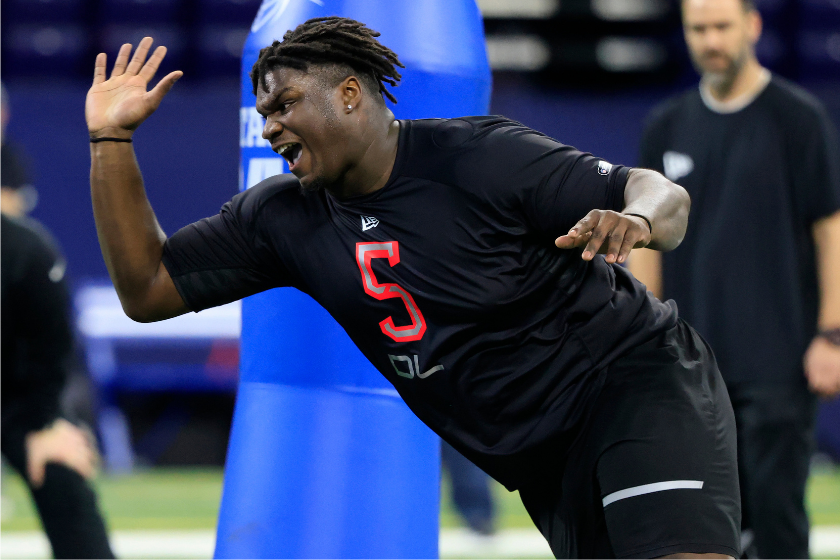 That all depends on who you ask. Originally looked at as a late first-round pick, Davis is now sliding down draft boards to the middle of the first round.

The sweet spot for Davis to have his name called in Las Vegas appears to be somewhere between #13 and #18. CBS Sports had him going to the Houston Texans at #13 in one of their earlier mock drafts. Only Pittsburgh gave up more yards rushing than the Texans last year. That pick would have been made by the Cleveland Browns, who also could have been a landing spot for Davis, but they sent it to Houston in the offseason as part of the Deshaun Watson trade.

The Baltimore Ravens at #14 are also a possibility, as are the Philadelphia Eagles, who own both picks #15 and #18.

Davis would also make a lot of sense for the Los Angeles Chargers at #17, who could use his run-stopping to bolster a defense that last year allowed the third-most rushing yards in the NFL.

MORE: Will Georgia DT Devonte Wyatt Be a First Round Pick?