Did You Know LSU’s Only Heisman Winner Became a Prison Dentist? 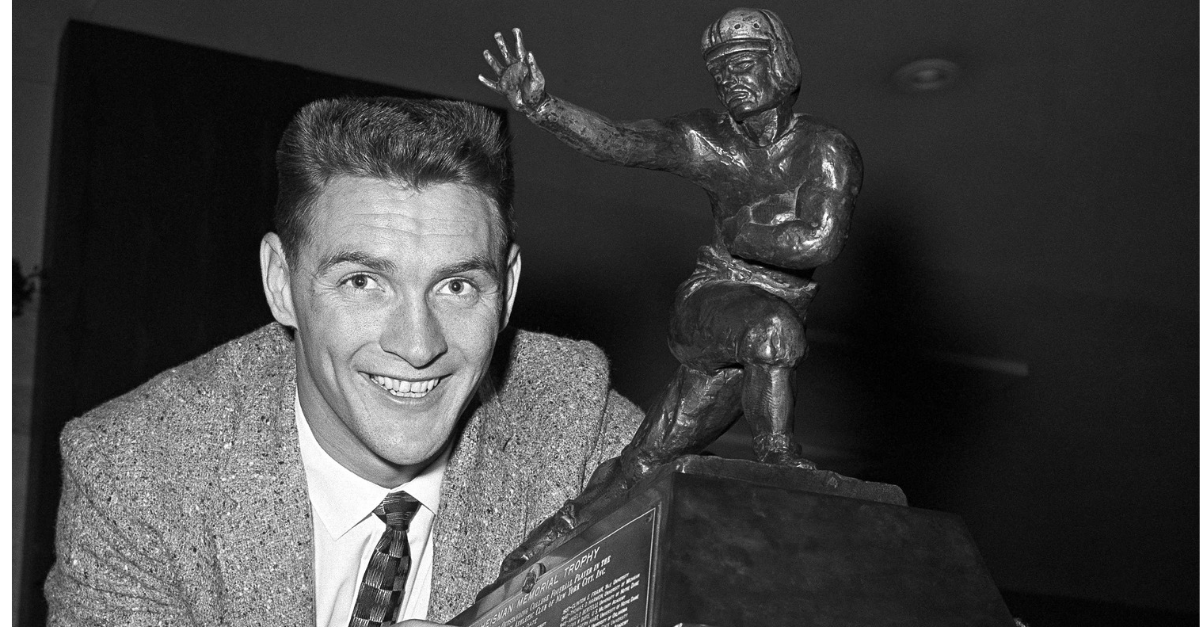 During the entire history of Louisiana State University‘s college football program, the Tigers have only had one Heisman Trophy winner and he eventually became a dentist… inside a prison.

As one of the best LSU football players in history, LSU halfback Billy Cannon had a great professional career and eventually became a dentist, but found himself inside a prison as an inmate before eventually getting a job inside one.

RELATED: The Halloween Run: It?s Been 60 Years Since an LSU Legend Was Born

Best known for his famous fourth-quarter, 89-yard punt return for a touchdown on Halloween night against Ole Miss in 1959, Cannon is the only LSU Tiger to win the Heisman Trophy. He was a running back, return specialist, and cornerback who led the Tigers to a National Championship in 1958.

Cannon also won the SEC Player of the Year twice and was a two-time Unanimous First-Team All American before being taken first0overall by the Los Angeles Rams in the 1960 NFL Draft. However, Cannon decided to sign with the Houston Oilers of the AFL instead.

January 1, 1961
George Blanda to Billy Cannon for a 88 yard TD to put the game away for the Houston #Oilers in the first AFL Championship Game.#DeepThrowThread pic.twitter.com/GyJvoESHNg

After a legal dispute between Cannon and the Rams, a judge ruled in Cannon’s favor to play in the AFL, which he did for 10 seasons with the Oilers and Oakland Raiders. He finished his career by joining the Kansas City Chiefs in the NFL for one season.

During his professional career, Cannon was earning his D.D.S from the University of Tennessee. When he retired, he went back to Baton Rouge to start his own dentistry practice. It was successful, but the former LSU standout still found himself in financial trouble due to failed real estate investments and gambling.

In 1983, it was discovered that Cannon had been involved in a counterfeiting scheme that had printed $6 million in $100 bills, including some that were stored in ice chests at his rented house. He was sentenced to five years at the Federal Correctional Institution, Texarkana and served two-and-a-half years before his release.

This wasn’t his first time in trouble, either. While at Istrouma High School in Philadelphia, Mississippi, Cannon got in to trouble for theft after he and a group of friends were caught extorting money from men they saw with prostitutes. LSU, Florida, Ole Miss, and many other schools were still chasing the state-record holder for the 100-yard dash, shot put, and All-American anyway.

He tried going back to dentistry after his release from prison, but his practice didn’t have the same success it had before. After about nine years, he was hired by the Louisiana State Penitentiary as a contractor, but completely reorganized the messy system that had been in place and was hired as a full-time employee, even being put in charge of the facilities’ entire medical system.

With Billy Cannon, Jr., who played one season with the Cowboys in '84. pic.twitter.com/QPN5b3bLYo

Dr. Cannon worked at the maximum security prison known as Angola until 2018 when he passed away in his sleep in St. Francisville, Louisiana. He was inducted into the LSU Athletic Hall of Fame in 1975, the Louisiana Sports Hall of Fame in 1976, and the College Football Hall of Fame originally in 1983, but was rescinded due to his involvement in the counterfeiting charges, and again officially inducted in 2008.

His  No. 20 jersey was retired after the 1959 season as the school’s first Heisman winner and the school built a statue in his honor. It has stood outside Tiger Stadium since 2018.

READ MORE: What Happened to JaMarcus Russell and Where is He Now?