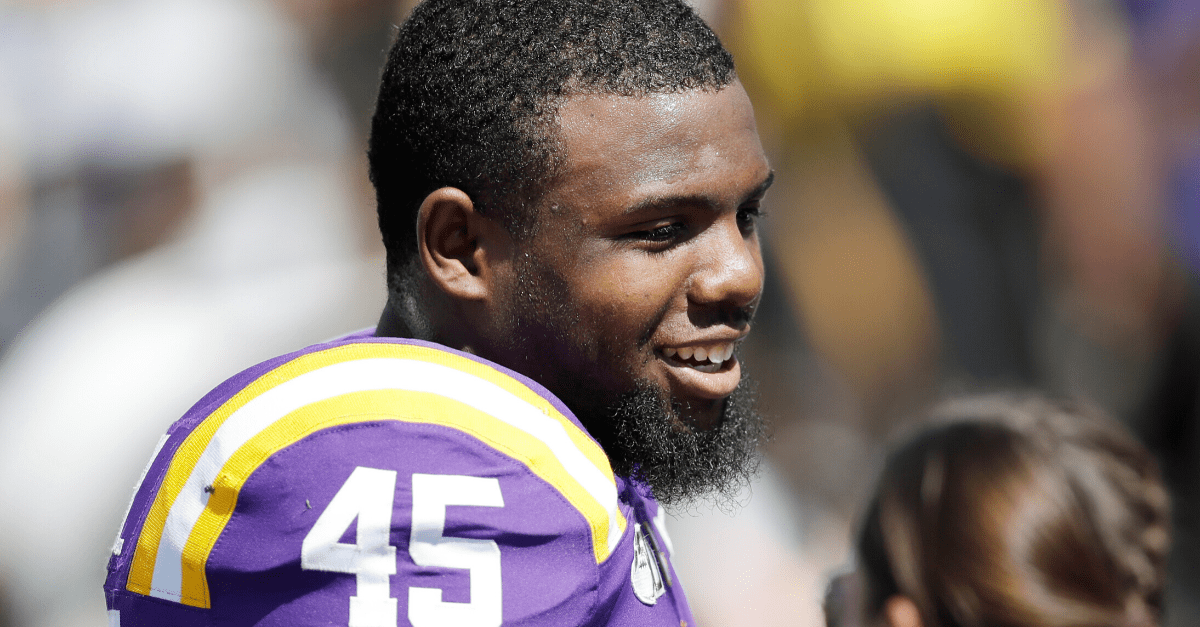 LSU linebacker Michael Divinity Jr. is no longer part of the top-ranked program in college football. First reported by The Athletic’s Brody Miller, Divinity left Louisiana State University’s football program “due to personal reasons,” and his nameplate was removed from his locker prior to LSU’s massive showdown against No. 2 Alabama.

LSU head coach Ed Orgeron echoed the same update at his press conference on Monday afternoon, simply saying that Divinity left for “personal reasons.” Orgeron added that the team “won’t close the door” on the possibility of him returning.

His name plate is already off his locker. https://t.co/1PkAoRo1zW

The senior started 11 games at outside linebacker in 2018 after K’Lavon Chaisson went down with injury. As a junior, he led the team with five sacks and recorded 54 tackles, and he also returned a fumble 58 yards for a touchdown in last year’s seven-overtime thriller against Texas A&M. The former five-star prospect from Marrero, Louisiana played some inside linebacker this year and led the Tigers’ defense with 3.0 sacks through eight games despite missing three of those games for unspecified issues.

Divinity did not play in LSU’s victories over Georgia Southern, Northwestern State and Utah State. The first two were “coach’s decisions” while his absence in the USU game was attributed to a leg injury.

Considered the vocal leader on defense, LSU defensive coordinator Dave Aranda told Divinity earlier this season, “With your ability and the leadership role you play — you’re very vocal — we would like to have you at that inside linebacker position and be that field general on the defense.”

Losing Divinity doesn’t destroy the LSU Tigers football team considering they’ve played without him in spurts this season, but having a talent like him unavailable opens a big hole that guys like Patrick Queen and Damone Clark need to fill with several SEC matchups still to come.

With All-American candidates Derek Stingley Jr. and Grant Delpit at defensive back, LSU boasts one of the nation’s most-talented defensive units. It’ll be curious to see how the loss of Divinity’s energy and leadership affects them, but more importantly, it’ll be interesting to learn more about why this senior linebacker just couldn’t stay on the field in Baton Rouge.

UPDATE (Nov. 19, 2019): Divinity returned to practice about three weeks after leaving the team. In an Instagram post, the linebacker thanked his teammates and the LSU community for their support, adding that he’d return to the team and will graduate in December.

#LSU OLB Michael Divinity (@Tht_Boy_Mike) looks to have rejoined the team. Was at practice today pic.twitter.com/ZZ9gjievQW

Feels Good To Be Back With My Brothers And Coaching Staff ❗️😬💪🏾

LSU is undefeated (10-0) and can clinch the SEC West by defeated the Arkansas Razorbacks this weekend. After that, one final home game against the Texas A&M Aggies remains before the postseason.