LSU quarterback Myles Brennan was not Joe Burrow. He was never supposed to be. He was never going to be. Brennan was his own man, a signal caller with elite talent, and when he took over the reins in Baton Rouge, it seemed he just getting warmed up.

A loss to the Mississippi State Bulldogs in the season opener is what many fans will remember about Brennanss first start in Baton Rouge. The disappointing start at Tiger Stadium is a sour taste thats's hard to get over, especially since the previous year was so perfect with a national title. Yet, Brennan showcased flashes of brilliance for the future.

Brennan went 27-for-46 for 345 yards with three touchdowns and two interceptions. He was also sacked seven times. It was hardly perfect, but the completions, attempts and yards were all records for a first-time LSU starting quarterback.

But after losing his starting position ahead of the 2022 season, Brennan has decided to step away from football, ending his Tigers career with a lot more questions than answers.

A former four-star recruit from St. Stanislaus High School in Mississippi, Myles Brennan waited patiently for his turn to be a starting quarterback in college football. He earned the right to be under center for the defending national champion LSU Tigers, too. Then he showed why.

After a sluggish start, a touchdown pass to tight end Arik Gilbert gave LSU the lead again in the second quarter. He found wide receiver Terrace Marshall Jr. in the end zone twice during the second half. He helped the Tigers score 34 points. It just wasn't enough.

"Myles did make some good plays," LSU coach Ed Orgeron said. "But we dropped too many balls. The offense woke up in the second half. But we made too many mistakes."

Mistakes are understandable. It was the first game in an SEC season delayed by the coronavirus pandemic and COVID-19 outbreak. Nobody in Louisiana was expecting national championship form, but most were at least expecting a win.

That didn't happen, of course, but the blame definitely shouldn't all be on Brennan, who completed five passes over 20 yards in the loss. Sure, he missed some throws, but setting records is no fluke and it's not like it's all his fault for taking seven sacks while also watching MSU quarterback K.J. Costello set an SEC record with 623 passing yards.

Myles Brennan Walks Away from LSU and Football 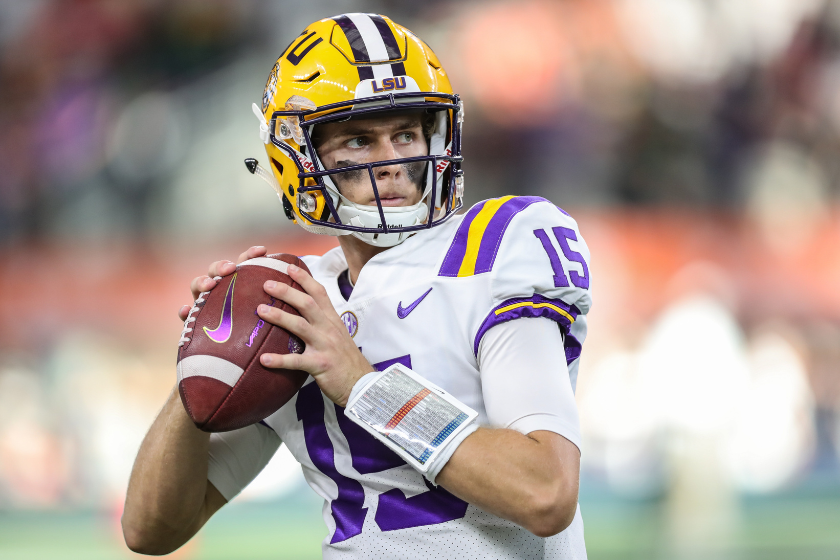 That 2020 season is in the past, and for Brennan so is the game of football. After Orgeron was removed from his position as head coach, Brennan entered himself into the transfer portal. This move makes total sense, especially for a player in a high-profile program like LSU's. With a new coach coming in, that new regime is going to want to put a new stamp on the program, it's risky business for a player. However, after having a conversation with the newly hired LSU head coach Brian Kelly, Brennan pulled his name out of the transfer portal and signaled a return to Baton Rouge.

"Well I would start with physically, he's improved his body, his conditioning level, all of those things had to start with his ability to just compete," Kelly said in April 2022. "He did a tremendous job in January, February, March leading into spring ball. Physically changing his body type, taking care of himself, getting stronger, which put him in a position to use a lot of his experience against, by and large other than maybe Jayden, an inexperienced group.

"He knows what he does well and he knows his limitations. So I think he's a smart, experienced quarterback that plays to his strengths. He throws the ball extremely well down the field, pushes the ball vertically, is always going to get us in the right play, protects himself and protects the ball. He's just a smart player."

Now, the promises made in that conversation seem to have changed. After being informed that he would not be the starting quarterback for the beginning of the 2022 season, Brennan announced he was stepping away from football. The LSU quarterback competition pitted Brennan against Walker Howard, Garrett Nussmeier, and Arizona State transfer Jayden Daniels, who more than likely pushed Brennan out of the starting spot.

Football is an unpredictable game and each season presents its own set of challenges and roadblocks. Even on the individual level, there's no way to plan for anything. For Myles Brennan, he had the chance to become the next big LSU icon. Instead, we're left wondering what would have happened if Brennan had been given the chance to shine in Death Valley.

This article was first published on September 30, 2020, but has been updated since to include news of Brennan's departure.

MORE: 5 LSU Players Who Will Usher in the Brian Kelly Era With a Roar