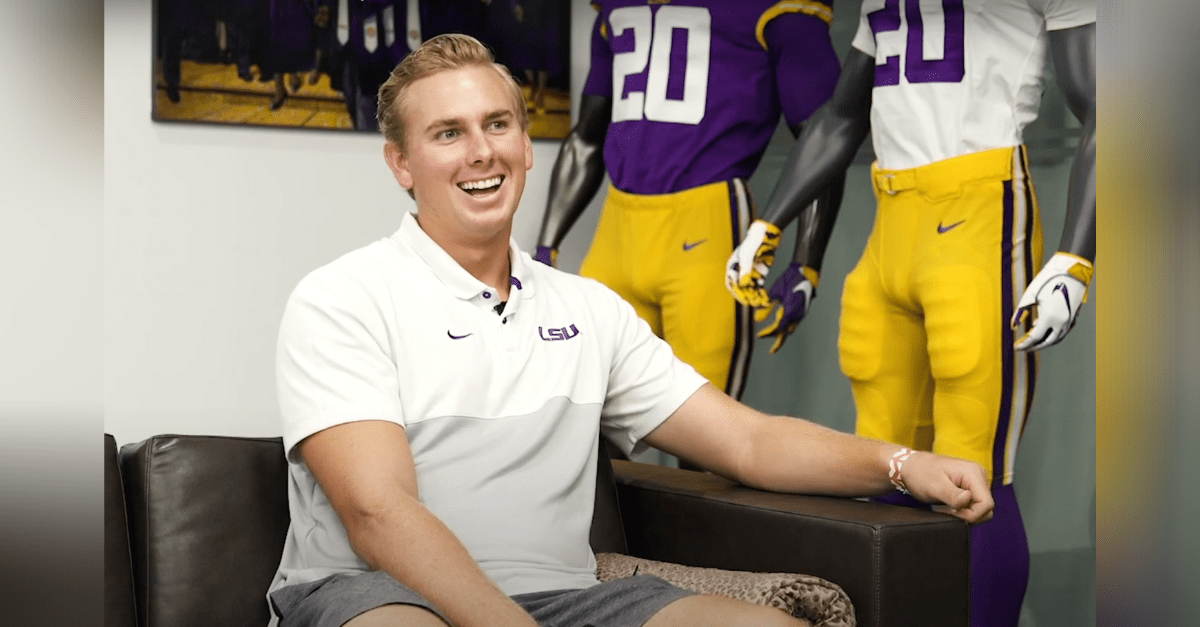 The list of college football’s “it couples” is short and sweet. There’s no doubt that Clemson quarterback Trevor Lawrence and his high school sweetheart have secured the hearts of ACC fans. Florida’s Kyle Trask and his softball-playing girlfriend would take the University of Florida prom king and queen crowns, if there were such a thing.

LSU just graduated Heisman Trophy winner Joe Burrow, who along with his girlfriend, are about to make a bunch of money in the NFL. All signs point to LSU quarterback Myles Brennan to be the next man up in Baton Rouge for head coach Ed Orgeron’s LSU Tigers. As the 2020 season gets underway barring any more coronavirus pandemic issues, Brennan and his girlfriend are likely heading for stardom in the SEC.

If the Long Beach, Mississippi native hopes to become the starting passer of a national championship team and an NFL quarterback like Burrow did, all he has to do is ask his girlfriend what it takes. One of her family members should know.

Happy Birthday love ❤️ thanks for everything you do! #meaux

Myles Brennan is dating Erin Hebert, a fellow Louisiana State University student who graduated from the school in May 2020, according to her Instagram.

After digging through both of their social media accounts, it appears they’ve been dating since at least February 2018. When Erin isn’t hanging with her quarterback boyfriend, she’s busy enjoying outdoor activities like paddleboarding and yoga. She was also in a sorority, Kappa Delta, while at LSU.

Erin is also Myles’ No. 1 fan and attends all of his games. After LSU won the College Football Playoff national championship game against Clemson, she had fond words of Mr. Brennan.

“Congratulations to my boy on the most incredible season, but it?s just the beginning!!! Sure feels good to be national champions!!! Myles, I am so so so proud of you. I have loved every moment of cheering you on this season and watching your hard work pay off. I can?t wait for you to show the world what you?re made of!!!! #commitment” she wrote on Instagram.

Congratulations to my boy on the most incredible season, but it’s just the beginning!!! Sure feels good to be national champions!!! Myles, I am so so so proud of you. I have loved every moment of cheering you on this season and watching your hard work pay off. I can’t wait for you to show the world what you’re made of!!!! #commitment

Myles seems to have found him a keeper. He knows that, apparently.

Erin Hebert comes from quite the football family.

Her grandfather was Bobby Hebert Sr., the father of former New Orleans Saints quarterback Bobby Hebert Jr. Hebert Jr. played in the USFL and spent 12 seasons in the NFL with the Saints and Atlanta Falcons, throwing for more than 20,000 passing yards and 135 touchdowns.

Hebert Sr.’s football-playing descendants didn’t stop there. His youngest son, Billy Bob, played football at Nicholls State and in the Canadian Football League. His grandson, T-Bob, played center for LSU and won a national championship in 2007. He also had another grandson, Beaux, who played at Nicholls State.

Erin’s grandfather was also quite proud of her boyfriend.

According to a GoFundMe started by the pair, he even called Myles “Les” in honor of former LSU coach Les Miles.

“Although not related to Myles by blood, Bobby Sr. considered Myles to be family when he started dating his granddaughter. He jokingly referred to Myles as “Les” after Les Miles. Bobby believed in Myles and supported Myles, just like he did with all of his sons and grandsons. Every time Erin would call her grandpa, he would never hang up without saying how proud he was of her and Myles and that he prayed for them everyday,” the fundraiser states.

Erin called her grandfather “Poppa,” and told the Daily Comet she still remembers the phone call she received from him after LSU won its most recent national title.

?I will never forget when Poppa called me just minutes after LSU won the national championship this year,? she said. ?I was in the Superdome and the awards ceremony hadn?t even begun. I could barely hear him, but heard him say how he was just so happy and excited and that he could see me on TV. He said I looked like a movie star. He was so proud of Coach O for that incredible season that I don?t think he could talk about it without tears filling his eyes.?

Please consider donating to Erin and I’s GoFundMe. We are all struggling from COVID-19 and want to help out. All donations are appreciated. Geaux Tigers. Link is in my bio

Sadly, Erin’s grandfather passed away from the deadly coronavirus at 81 on March 28 at Ochsner Medical Center in Kenner.

Following her beloved Poppa Bobby’s death, she and Myles started a GoFundMe to raise money titled the “Bobby Hebert Sr. COVID-19 Relief Fund.” Its goal was $15,000, but local fans and those that knew Bobby Sr. blew that away quickly for more than $17,000.

“Really excited to say Erin and I raised $17,158.23 in honor of Bobby Hebert Sr. I can?t thank everybody enough who donated for being so generous during these crazy times. Stay safe and much love,” Myles Brennan wrote in a Tweet on May 9.

Really excited to say Erin and I raised $17,158.23 in honor of Bobby Hebert Sr. I can’t thank everybody enough who donated for being so generous during these crazy times. Stay safe and much love

Brennan told The Advocate that all the money would be donated to the Ochsner Clinic Foundation, the hospital network that supported Bobby Sr.’s health problems throughout the years. It was the perfect way to honor Bobby Sr. Like Trevor Lawrence and his girlfriend’s fundraiser, he had to get clearance from the NCAA.

?Ochsner Health has always taken such great care of Bobby Sr.?s medical needs. He was so trusting of the medical professionals at Ochsner” the GoFundMe reads.

Myles and Erin may just be the next “it couple” to come out of Baton Rouge. LSU football won’t have one of its biggest fans watching from the stands, but you can bet he’ll still be tuning in. I’m sure he’ll be yelling “Geaux Tigers!” as well.

“At least he’ll be able to watch us from above ? if we can get out there this year,” Brennan told The Advocate. “We had a special connection.”

MORE: Joe Burrow and His Girlfriend Are The NFL?s Next Power Couple