Patrick Peterson Picked Off Alabama, No Matter What Anyone Else Says 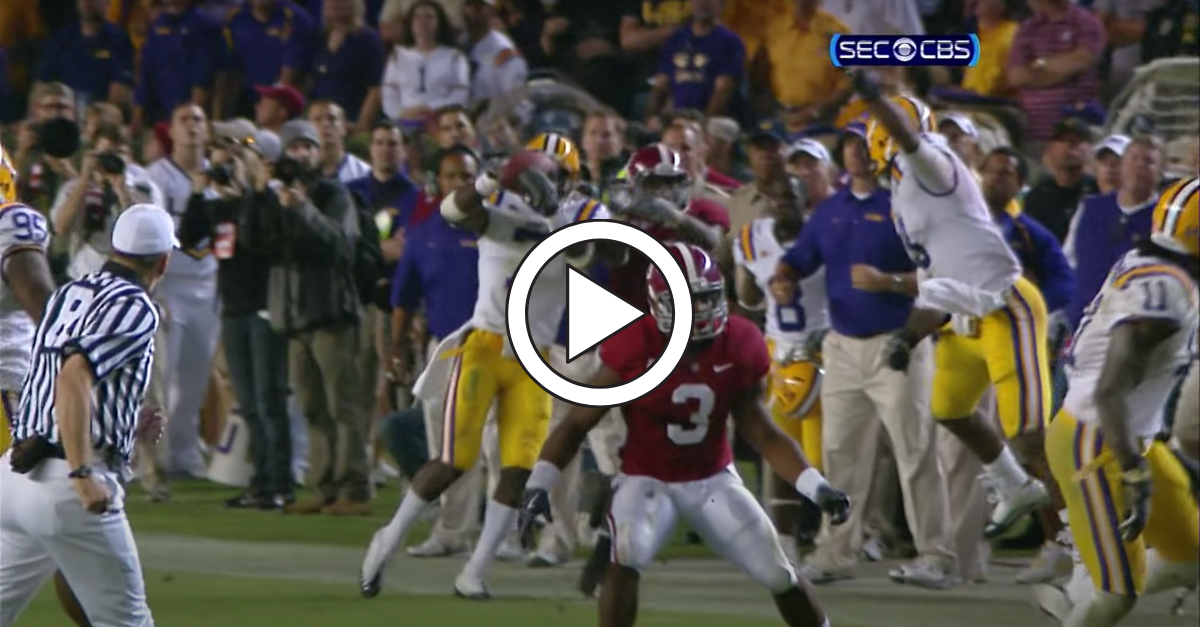 There?s been no shortage of heated battles between the LSU Tigers and Alabama Crimson Tide over the years. These SEC West rivals make their annual college football game must-see television. Picking the best moment is likely up to each fan base, but choosing the most controversial one might be something both sides can agree upon.

On November 7, 2009, the Tigers stormed into Tuscaloosa for a Top-10 showdown with the Crimson Tide looking for an upset. All eyes were tuned in to the CBS game at Bryant-Denny Stadium given its high stakes and future NFL superstars. The stage was set for a classic, and it lived up to the hype, but it was also marred by controversy.

Midway through the fourth quarter, it appeared LSU cornerback Patrick Peterson picked off Alabama quarterback Greg McElroy. The interception would have potentially changed the game. However, even after further review, the pass was ruled incomplete and it?s a call that still fires fans up over a decade later.

Heading into the Southeastern Conference game, defensive back Patrick Peterson going against wide receiver Julio Jones was the matchup everyone wanted to see. Both football players were absolutely electric at their positions. The winner of that battle was likely going to play a major factor in the outcome of the game.

With just under six minutes remaining, it almost did.

Facing 2nd-and-7 at the LSU 40, Bama standout quarterback Greg McElroy dropped back, immediately rolled out to his right and eventually fired a strike to the sideline for Jones, his favorite target.

The pass was risky. Jones wasn?t open. Neither was anyone else, for that matter. Yet, McElroy still tried to thread the needle and Peterson was right there to break it up.

The call favored the home football team and the rest is history.

Alabama capped off the drive with a field goal, LSU?s Jarrett Lee threw an interception on the next drive, and the Tide escaped with a 24-15 victory. They finished the NCAA regular season undefeated, won the SEC title game against Florida, and took home the BCS National Championship Game against Texas.

LSU finished the season 9-4, including big wins against Georgia, Auburn, and Arkansas, and losses to Florida, Alabama, Ole Miss, and Penn State.

Who knows what would have happened if the play was ruled an interception. Maybe LSU would have gone down and scored a touchdown. Maybe they wouldn?t. Perhaps the entire season would have changed. A better explanation just would have been nice.

Peterson, a legend in Baton Rouge and a first round pick in the 2011 NFL Draft by the Arizona Cardinals, even brought it up years later.

Haven't seen that bad of a call since…….. 👀😳 #NeverForget #PacquiaovHorn @espn pic.twitter.com/BpDnZhbvz7

Debating this will never get old. Peterson intercepted that ball, no matter what anyone else says.

MORE: 5 Reasons LSU is ?Defensive Back University? and No Other Team is Close