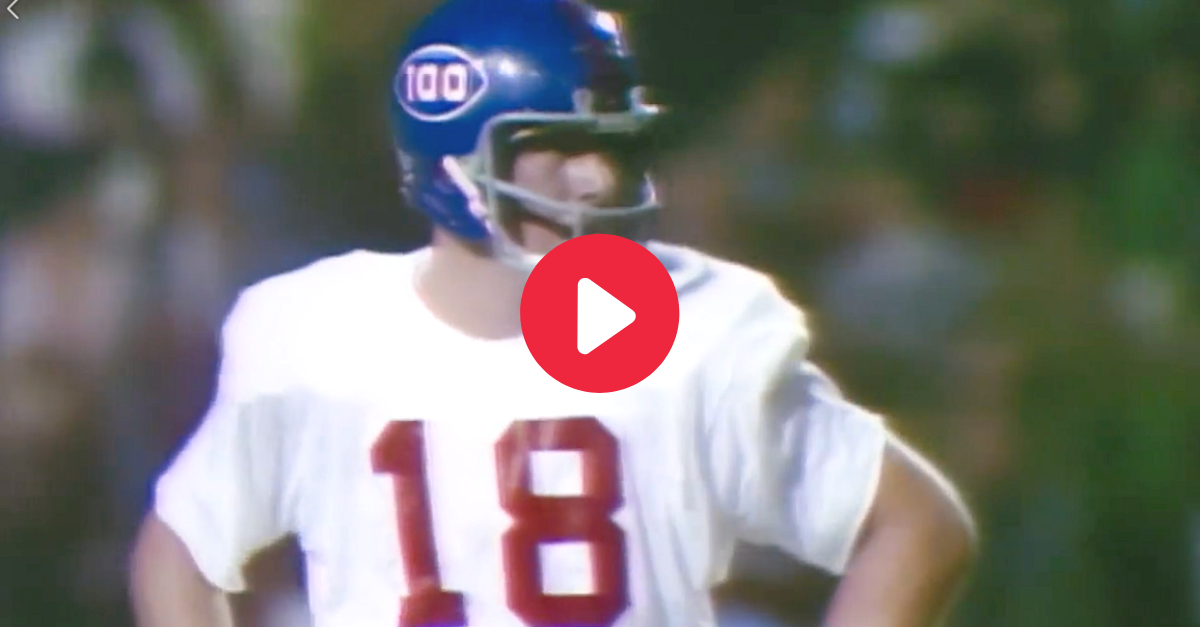 Night games. Something about hard-hitting action under the lights gives me chills, plus a case of PTSD reminiscing on my playing days. Watching NFL teams battle on Monday Night Football is as American as the family farm. College football Saturdays are reserved for the biggest matchup and brightest lights, creating atmospheres you can help but get goosebumps in.

But night games weren’t always so common. It took iconic rivalries to bring the game into homes across the country. It took legendary performances to stamp the weekend tradition on our schedules. It took guys like Archie Manning becoming a hero on national television.

Ole Miss QB Archie Manning in 1970. Ladies, try and hold it together. pic.twitter.com/9cZyDt0vop

Elisha Archibald Manning III was raised in Drew, Mississippi. If anyone was born to play quarterback for the Ole Miss Rebels, it was Archie. For the final three seasons of legendary head coach John Vaught’s tenure in Oxford, No. 18 became one of the best players in the country.

Manning’s dual-threat skill set made him a menace in the Southeastern Conference. Manning racked up 5,576 total yards of offense and 56 touchdowns in his career; Those numbers would make Joe Burrow laugh, but from 1968-70, that made Manning a two-time Heisman Trophy candidate and 1969’s SEC Player of the Year.

Early in his junior season, Manning’s talent was already feared in the South. But when his Ole Miss Rebels traveled to Legion Field to take on Bear Bryant and Alabama Crimson Tide, Manning brought his very best.

This SEC rivalry was so massive, it became the second regular season college football game ever to air in prime time on national television.

There was only one matchup to see: Archie Manning vs. Alabama starting quarterback Scott Hunter.

From the opening kickoff, the game delivered on every level. At a time when running the football was priority No. 1, both offenses lit up the scoreboard through the air. Hunter finished 22-of-29 for 300 passing yards and the game-winning touchdown pass to George Ranager, giving the Crimson Tide a 33-32 victory.

The story of that game, however, was Archie ? He racked up 436 passing yards and two touchdowns while completing 33 of 52 passes. On the ground, Manning torched Alabama’s defense for 104 rushing yards and three more touchdowns.

Manning’s 540 total yards of offense was the single-game SEC record for 43 years until Texas A&M’s Johnny Manziel showed up in 2012. Manning’s performance that night still ranks fifth in conference history behind three Manziel games, and Dak Prescott’s 554 yards against Arkansas in 2015.

Manning lost, walking off the field in tears. It didn’t matter; He became a national hero for his gutsy performance.

He was an All-American and Sugar Bowl MVP that same year, had his No. 18 retired by the University of Mississippi, and was inducted into the College Football Hall of Fame.

On this day in 1971, the #Saints drafted Ole Miss QB Archie Manning with the 2nd overall selection in the @NFL Draft pic.twitter.com/drjI4hmMpa

Manning became the No. 2 overall pick in the 1971 NFL Draft by the New Orleans Saints, an expansion franchise entering its fifth season of pro football. Manning started 129 games for the Saints over 11 seasons, but the lowly franchise only won 35 of those contests. Manning eclipsed 3,000 passing yards in three different seasons and threw 125 touchdowns against 173 interceptions during his career ? Most of the time, he was running for his life.

Manning’s NFL career ended in 1984. Two of his sons ? Peyton Manning and Eli Manning ? also became pro football players. They were on a few Super Bowl teams, I think.

Today, Archie Manning remains as an ambassador to the game. He served on the first-ever College Football Playoff Selection Committee and roots for his grandson Arch Manning, a nationally-recognized high school recruit in the Class of 2023.

The Manning name is synonymous with quarterback excellence. It was Archie who set the standard.