In wake of fans’ protest of athletic director, Tennessee fan taken down by officers 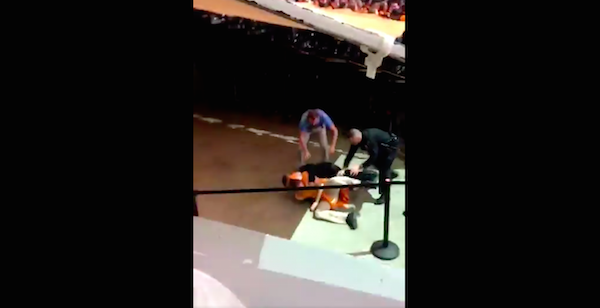 Things are getting even more tumultuous on Rocky Top.

During Wednesday night’s basketball game against Mercer, UT students chanted “Fire Currie,” which reportedly led to an attempted “drown out” by the Pride of the Southland Marching band, as well as ejections.

Students at #Tennessee were able to squeeze in a few “FIRE CURRIE! FIRE CURRIE!” chants before the band cranked up during a timeout at #Vols hoops Wednesday night. The next chant was for @Lane_Kiffin. pic.twitter.com/slxFwQ5oEg

THEY TRIED TO TURN THE MUSIC UP ON US BUT WE WILL NOT BE SILENCED #FIRECURRIE pic.twitter.com/cTEQMIx2EN

One unidentified fan was captured on video being escorted out of the arena in handcuffs and taken down by officers.

The fan was reportedly arrested for public intoxication, resisting arrest and assaulting an officer, according to a UT spokesperson.

Person at game tonight arrested for public intoxication, resisting arrest and assaulting an officer, according to Tennessee spokesperson.

The Vols have missed out on several coaching candidates since revoking their reported deal with Ohio State defensive coordinator Greg Schiano on Sunday, including Oklahoma State’s Mike Gundy, Purdue’s Jeff Brohm and several others.

Now, Tennessee has reportedly turned its attention to NC State’s Dave Doeren, which — if they weren’t enough already — made Vol fans even more furious.

On Sunday, Tennessee reportedly reached a memorandum of understanding with Schiano, which led to protests on social media and UT’s campus by Vol fans, leading to a breach in the agreement.