Aaron Glenn Picked Off Texas, And Celebrated His Way Into the End Zone 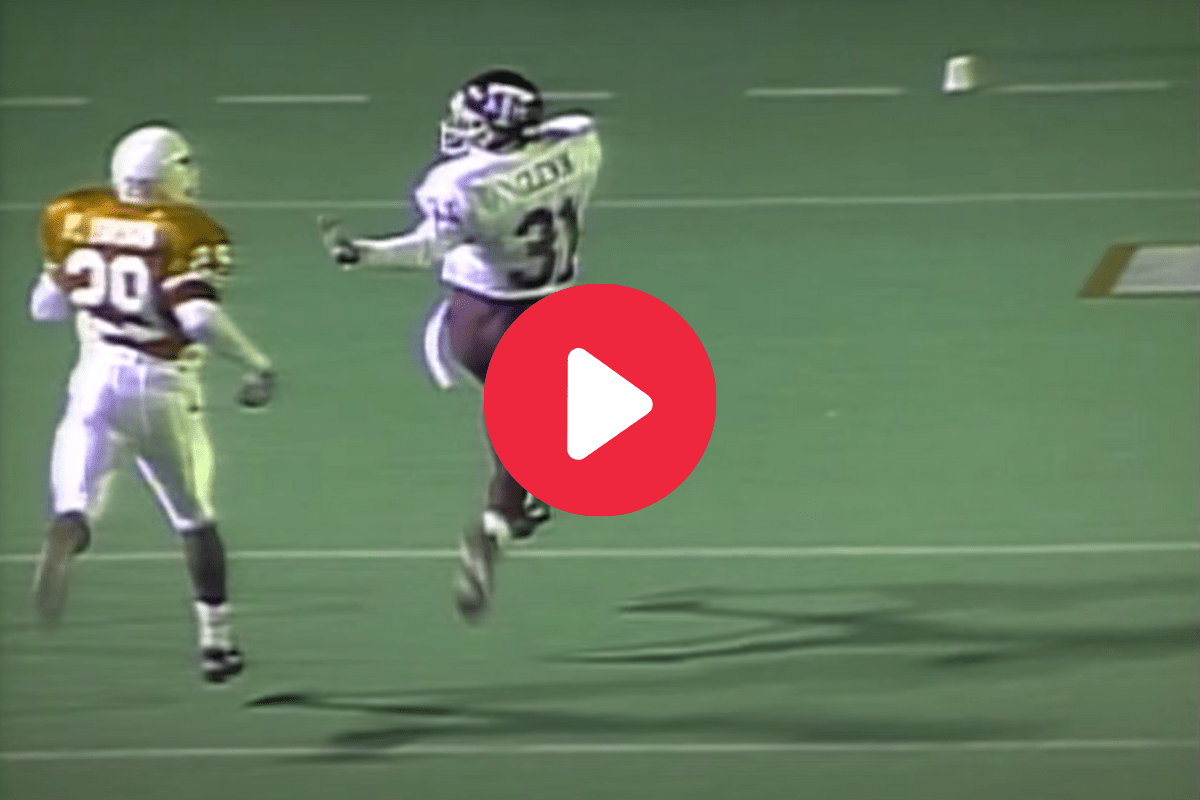 The Texas A&M Aggies have boasted some amazing college football teams over the years. The dominant 1919 squad definitely comes to mind. So does the 1998 Big 12 Championship team. What many people outside of College Station fail to realize is the program?s rich history, and there?s one group that often gets overlooked for its greatness.

The 1992 Aggies were so damn good. Texas A&M, under head coach R.C. Slocum, destroyed its competition in the Southwest Conference en route to a perfect regular season. It was a magical run, no doubt, and a rivalry win against the Texas Longhorns provided a memory for a lifetime.

Defensive back Aaron Glenn certainly added some swag to it as well.

RELATED: The 12th Man Got So Loud, It Delayed the 1985 Texas Beatdown

At the time, the Aggies were looking to become only the fifth team in college football history to go 12-0 during the regular season. This game on ESPN meant much more than that, though.

?The 12-0 season wasn’t the focal point at that time,? cornerback Aaron Glenn said years later. ?The focal point was Texas in general. I had this build up from when I stepped on campus to where I’m like — ?I don’t like these guys.?”

Glenn, then a junior, made sure Texas A&M would celebrate that night.

Late in the fourth quarter, Texas needed a touchdown to keep its comeback hopes alive. Quarterback Peter Gardere had the Longhorns in the red zone, too. Then, on first down, Gardere made a huge mistake. His pass sailed right into hands of Glenn around 5-yard line, and he was off to the races.

No matter how hard the Longhorns tried, not a single orange jersey was going to catch Glenn. He was too fast and too determined to find the end zone. And once the coast was clear, he did a fun little high step on his way in for the touchdown.

?I saw the three-step drop, and thought the slants coming,? Glenn said. ?Once (the receiver) broke, I just broke and took a shot.

?Once I catch the ball, it was like free sailing. The only thing I can do is mess this up by letting somebody catch me. I’m like, ?OK, let me do something to add a little more flair to this.? Which was not smart, because Coach Slocum got on me for that one too. And I deserved it.

?I’ve had a lot of exciting plays in my career, but I’m always putting that one as probably the most exciting. I can still see that play.?

Glenn, now a defensive backs coach with the New Orleans Saints, was a first-round NFL Draft Pick and earned three All-Pro selections in his career with the New York Jets, Houston Texans, Dallas Cowboys, Jacksonville Jaguars and Saints. Needless to say, the three-time Pro Bowler made tons of plays.

So for the former First-Team All-American to say this interception is the most exciting means something, and proves just how special that team was.