When Sonny Dykes took over as Texas Christian University's football coach, no one in the college football world expected he'd be able to lead the TCU Horned Frogs to the national title game for the first time in almost 100 years. Now, the Texas-based coach, who recently spent years at SMU, is taking on the Georgia Bulldogs in the hopes of bringing the national championship trophy to the Dallas-Fort Worth area. And while Dykes is doing all he can to support his football team, his wife, Kate Dykes, is doing everything she can to support her husband and team at home.

Kate Golding has known head football coaches since she was a child, as sports ran in her family. "I wanted to be a sideline reporter," she told DFW Child. "But my whole life I was an athlete. My dad is a coach, my grandfather is a coach, my oldest brother (Joe Golding of UTEP) is a coach."

She and Sonny knew each other's families, as Sonny's father, Spike Dykes, was a legendary Texas Tech coach. But they never crossed paths until Kate worked in the sports information department at Texas Tech when she was a student. Sonny, who was working in the Red Raiders football program as a wide receivers coach, offered to help his future wife Kate find a job and asked for her number. The rest is history.

Their Journey to TCU and Their Growing Family

RELATED: Max Duggan's Parents and Adopted Siblings Made Him the Leader He Is

From there, the couple traveled the country as Sonny took jobs with Arizona, Louisiana Tech, Cal Berkeley and Southern Methodist University before accepting the head coaching position at TCU. There, he led them through the College Football Playoff to the NCAA national championship game. All the while, the Dykes family grew, with Allie, Charlie and Daniel joining Kate and Sonny's roster.

Along the way, Kate has been a part of many football families -- each one different -- and has made it a point to reward the sacrifices football wives make for the game, including a coaches' wives retreat every season. "They're amazing. We try to do as much as we can, like a staff retreat and coaches' wives trip, and any chance we can to celebrate them. They give so much. Anything we can do -- they're so grateful." 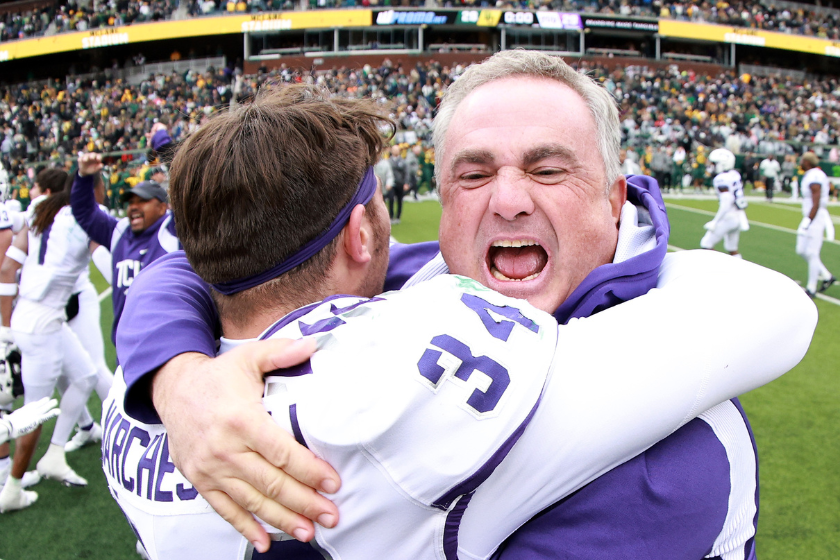 That whole journey has led to a CFP semifinal win over Michigan and a date with Georgia in Los Angeles on ESPN. Who knows? Perhaps this is the moment that Kate and Sonny Dykes have been waiting for. With so many NFL jobs opening up, this may be the moment for the football coach to make the jump. But given the Dykes' love for all things Texas, he may only take a job coaching the Dallas Cowboys or the Houston Texans.

And even if he never wears an NFL headset, Sonny will always know that Kate will be ready to follow him wherever he chooses to coach.