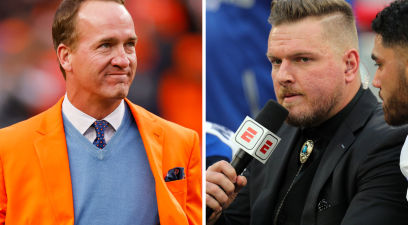 How about the Miracle in Muncie? Well, almost.

In 2020, Western Michigan and Ball State met in a coveted #MACtion matchup to duke it out for a spot in the conference championship game. Ball State kicked a 22-yard field goal with 29 seconds remaining in the game to take a 30-27 lead. Following the kickoff, Western Michigan started their drive at their own 39-yard line.

What ensued was as crazy a sequence as you’ll see in college football.

The Broncos gained 10 yards following a shovel pass after an incomplete pass on first down, but they didn’t have any timeouts and spiked the ball with six seconds left. Then, the magic happened.

“Are you counting?” the announcers ask.

Eventually, Eleby throws an errant lateral to Jefferson and Ball State appeared to recover. The entire Ball State team proceeds to rush the field in celebration. Not so fast. my friend. The ball squeaked out and Western Michigan kept the lateral party going despite whistles blowing left and right. In a scene reminiscent of “The Play”, several Ball State players who weren’t even on the field during the play attempt to bring down Western Michigan ball carries. But, they didn’t come through. Moore ends up with it and finds a crease along the left sideline all the way to the end zone.

Flags were raining all over the field, and even though the play was ruled a touchdown, the refs met at midfield to discuss what the hell just happened. The head referee comes out to announce an unsportsmanlike conduct penalty on Ball State for the team rushing the field. Then…well then the ESPN broadcast cuts out and we don’t hear him finish. What a callback to “The Sopranos”. It was later revealed Moore was flagged for an illegal forward pass near the beginning of the play, thus reversing the touchdown.

There are so many things to digest here. We’ve already talked about the laterals and the team on the field, but the broadcast going black is a beautiful final touch. You’re telling me we experience perhaps the craziest college football play this century and we don’t hear the result? What else could happen? A spaceship lands in the middle of the field and Michael Jordan comes out to play quarterback? I wouldn’t doubt it.

If the chips would’ve fallen in Western Michigan’s favor, this would be as iconic a play as any in college football history. Nonetheless, it was a doozy to watch.