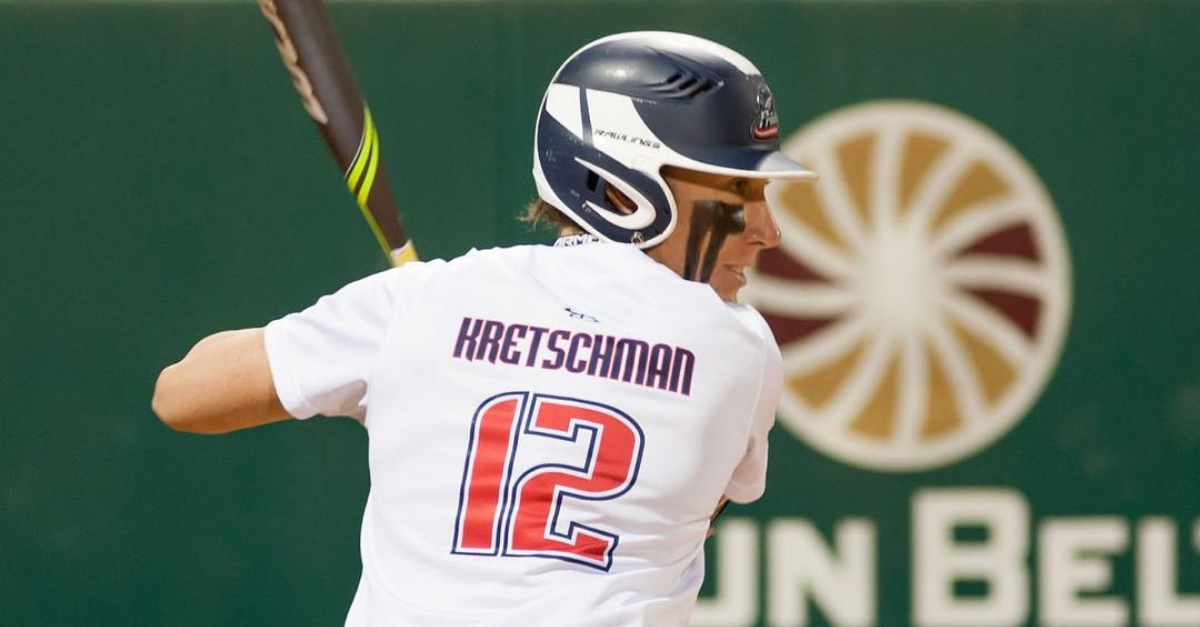 The rise of college softball over the past couple decades has been well documented. The sport?s booming popularity at the NCAA level means these incredible women should get paid at the professional level, though sadly we know National Pro Fastpitch players are making less than New York Yankees bat boys.

Schools like UCLA, Oklahoma, Arizona and Arizona State laid the groundwork for softball?s expanding appeal. Stars such as Jennie Finch, Cat Osterman, Monica Abbott, Lauren Chamberlain, Lisa Fernandez and Jessica Mendoza have done wonders for the sport in America and abroad on the Olympic level.

In the south ? especially the SEC ? softball is all the rage. Not only is the sport making money at certain schools thanks to skyrocketing attendances, but teams like Florida, LSU, Alabama and Florida State have become dominating presences in the Women’s College World Series.

Alabama’s program wasn’t even founded until 1997 and wouldn’t be anywhere near the perennial powerhouse it is today without the help of one woman: Kelly Kretschman.

The now 39-year-old outfielder has put together as illustrious a career as anyone in softball history. It includes multiple NFCA All-American honors at Alabama, two Olympic medals, three-straight National Pro Fastpitch Player of the Year awards and much more.

Kretschman?s impact on the game began in Tuscaloosa, a place she said felt like home from her first official visit in 1996.

Faced with a decision between two SEC schools in Alabama and LSU ? where she would?ve played soccer and softball ? Kretschman couldn?t turn down the opportunity to wear the crimson and white every day.

?There was just something about Alabama that I couldn?t get past. I loved the coaching staff and girls. Guess you could say I felt like I was born to say ROLL TIDE!!!? she said in a USSSA Pride release.

Alabama head coach Patrick Murphy was an assistant at the time and recruited the left-handed power hitter heavily. He remembers the cruel joke she played on him when she called with her intention to commit to UA:

“I was nervous as hell. She could make or break our program. This is what she said:
‘My parents and I have talked to it over and we have settled on a school. We really think that I need to concentrate on getting my grades up in college so I am going to attend a junior college here in Florida.’ I immediately fell on a chair ? and then said, ‘Ok.’

“I’m still working on getting her back for that.”

Originally from Indian Harbour Beach, Florida, where she played at Satellite Beach High School, Kretschman made her mark on Crimson Tide softball instantly.

As a freshman in 1998, she hit an ungodly .467 to go along with 25 home runs and 40 stolen bases. She broke Alabama and SEC records for batting average, hits, home runs and slugging percentage.

She followed her freshman campaign up with another All-American season before carrying the Tide to its first ever Women?s College World Series appearance in 2000. They were bounced by Southern Mississippi.

By the end of her senior season in 2001, the four-time All-American finished as the Alabama career leader in average, RBIs, home runs, triples, doubles, hits, walks, runs, stolen bases, slugging and on-base percentage and still holds a number of those records.

Kretschman took Alabama softball to never-before-seen heights. Since the day she became a member of the Crimson Tide, they have consistently ranked among the top 25 teams in the country and have made 12 Women?s College World Series appearances while winning the whole thing in 2012.

This year, last year, AND the year before.

Kretschman?s Olympic hardware includes gold and silver medals. She tallied a hit in the United States? gold medal match against Australia in 2004.

In 2008, she took home silver when Team USA fell to Japan’s national team, 3-1. Though she only walked in the final game, Kretschman hit .348 throughout the tournament.

Softball was ousted from the Olympics after 2008 but is returning in 2020, and Kretschman has every intention of playing for the red, white and blue. Even if she’s the oldest player out there.

Her 13-year career seems far from over, too. She intends on playing more seasons in the NPF and has her sights on playing in the 2020 Olympics for Team USA.

Though Kretschman is approaching 40 years old, she’s showing no signs of slowing down. Coaching could be in her future once she walks away from the playing field ? she worked as a volunteer assistant at the University of Maryland in 2012 and as an assistant coach at Texas State from 2015-16.

Still, Kretschman should be remembered in University of Alabama history the way Bear Bryant and Nick Saban are. Plenty of great fastpitch softball players have played for Alabama (Jackie Traina, Brittany Rogers and Haylie McCleney, to name a few) and will continue to do so, but Kelly Kretschman did it first and paved the way.