Montana Fouts didn't have many conversations in the dugout during Alabama's Women's College World Series win over UCLA.

The Crimson Tide softball pitcher was in the middle of throwing a perfect game, and anyone who so much as asked her what flavor of gum she was chewing would be committing a cardinal sin.

By this point, Fouts is used to it.

She tossed 25 no-hitters and 15 perfect games in high school.

This one was special, however. It happened on college softball's biggest stage and her 21st birthday.

Alabama took care of Arizona 5-1 in the opening round of the WCWS. It was Fouts' turn to take the circle in the second round.

The junior pitcher is familiar with big moments. She clinched the SEC Tournament title by throwing a complete game shutout against Florida. She struck out 11 in the first game of the Tuscaloosa Super Regional against Kentucky.

The Tide faced their toughest test yet in the second-seeded UCLA Bruins.

As if that were a big deal to Fouts.

She took care of each batter one by one, including Tom Brady's superstar niece Maya Brady.

The 2021 SEC Co-Pitcher of the Year recorded a K in 14 of the 21 outs. Two out of every three Bruins went down on strikes. Sheesh.

During one stretch, she struck out seven in a row. UCLA didn't hit it out of the infield until the fifth inning.

Of the seven outs that weren't strikeouts, the scariest was probably the first of the game.

Fouts spoke on her accomplishment after the game:

"I honestly wasn't really thinking about it. I don't think you can think like that as a pitcher, as a player or even in the stands really, because I feel like I'm a superstitious person, but I don't know, I was just locked in each pitch because I know that one swing away they have momentum, they're a great hitting team, great pitching staff, we respect them so much. So I think -- Murph says all the time -- respect your opponents. And tonight for me I think that that just meant locking in pitch by pitch, just because I know the game could get away in a heartbeat." 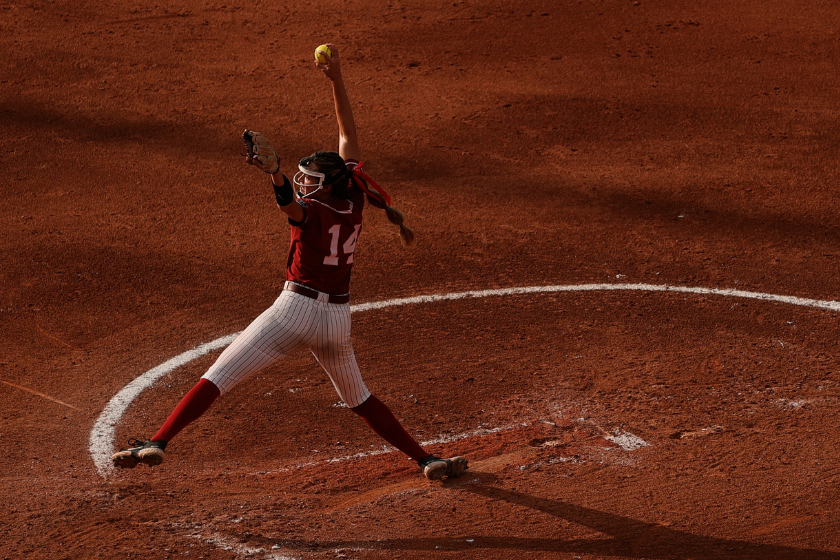 No-hitters come and go, but perfect games are rare gems. In Major League Baseball, the only postseason perfect game was Don Larsen's Game 5 gem in the 1956 World Series more than 65 years ago. But Fouts' accomplishment is possibly even more difficult. Larsen played on the insanely talented 1950s Yankees who played in multiple World Series over their decade of dominance. Fouts is playing for Alabama, in a tournament where she has to face off against teams from all over, who she's never pitched to and who have nothing to lose, and within a window of playing opportunity that can only last so long as a student-athlete.

Whether or not Alabama made it to the Championship Series is irrelevant to this story. The fact that Montana Fouts was able to pitch a perfect game is one thing, but the fact that she did so under intense pressure, or the game's biggest stage, within a small window of opportunity? That's truly masterful.