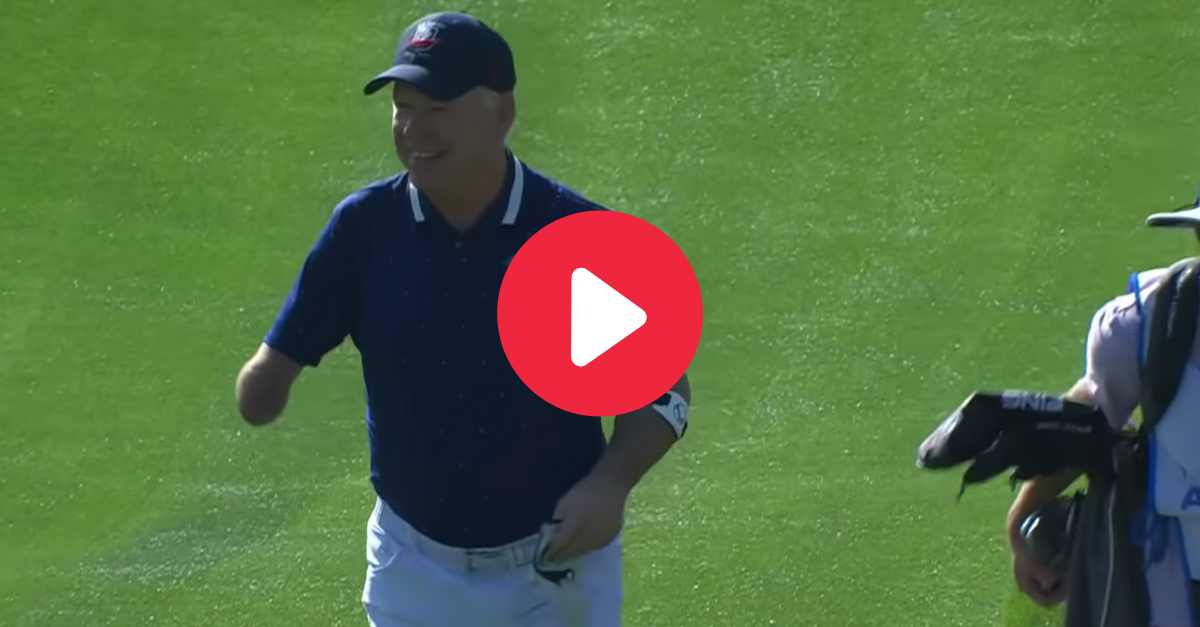 The hole-in-one is one of the most exciting things in sports. For professional golfers, they’re way more common than you’d expect. For amateurs like the rest of us, sinking a shot from the tee box is the highlight of our athletic careers.

Sometimes it takes a lifetime of hitting the links before scoring a hole-in-one. George W. Bush finally drilled one at a famous Texas course after 72 years of living. For others, like this one-armed 8-year-old boy who’s golfed with Tiger Woods, nailing hole-in-ones and hitting home runs comes naturally.

One-armed amateur golfer Laurent Hurtubise is proof that even without both arms one can still ace a hole on a golf course. During a PGA Tour pro-am event in California on Thursday, the Canadian amateur made a 151-yard hole-in-one in the opening round.

As you’d expect, it was amazing.

The Canadian golfer, who was born without most of his right arm and tees up lefty, sunk the incredible shot on the fourth hole at the PGA West Stadium Course in La Quinta. Hurtubise was playing alongside three-time PGA Tour winner Troy Merritt during the American Express Tournament, which featured headliners like Rickie Fowler and Phil Mickleson.

“The coolest experience I’ve had on the golf course,” Merritt told PGATour.com.

Greg Chalmers, another TOUR winner who was playing in Hurtubise’s group during the PGA Tour event, said the one-armed amateur golfer’s shot of the day was one of many great shots during the round.

?He hit the shot and it was a nice little cut for a leftie. Right away we sort of said ?sit down? but it was one of those shots where you always thought, hang on ? this could go in here,? Chalmers told PGATour.com.

?It landed around the front of the green and we were all watching it closely as it tracked toward the hole and then bang, it disappeared. We all went up in celebration and Laurent went ballistic and maybe let out a few choice words, but who could blame him? It was an incredible shot.?

Hurtubise has a pretty amazing story. Growing up with one arm wasn’t easy, so he played sports to help fit in. Despite swinging with just his left arm, he can drive a golf ball about 230 yards. He’s even helped kids overcome their disabilities at a hospital near his home in Montreal.

“As a kid, sports was a way for me to prove that even though I had a difference that I could perform as well as normal people … as they call them,” Hurtubise told the Desert Sun.

“People have differences and handicaps and whatever, but it was my way to prove that I could be as good as everybody else.”

MORE: This One-Armed Kid Blasts a Home Run, But It?s Nothing New For Him