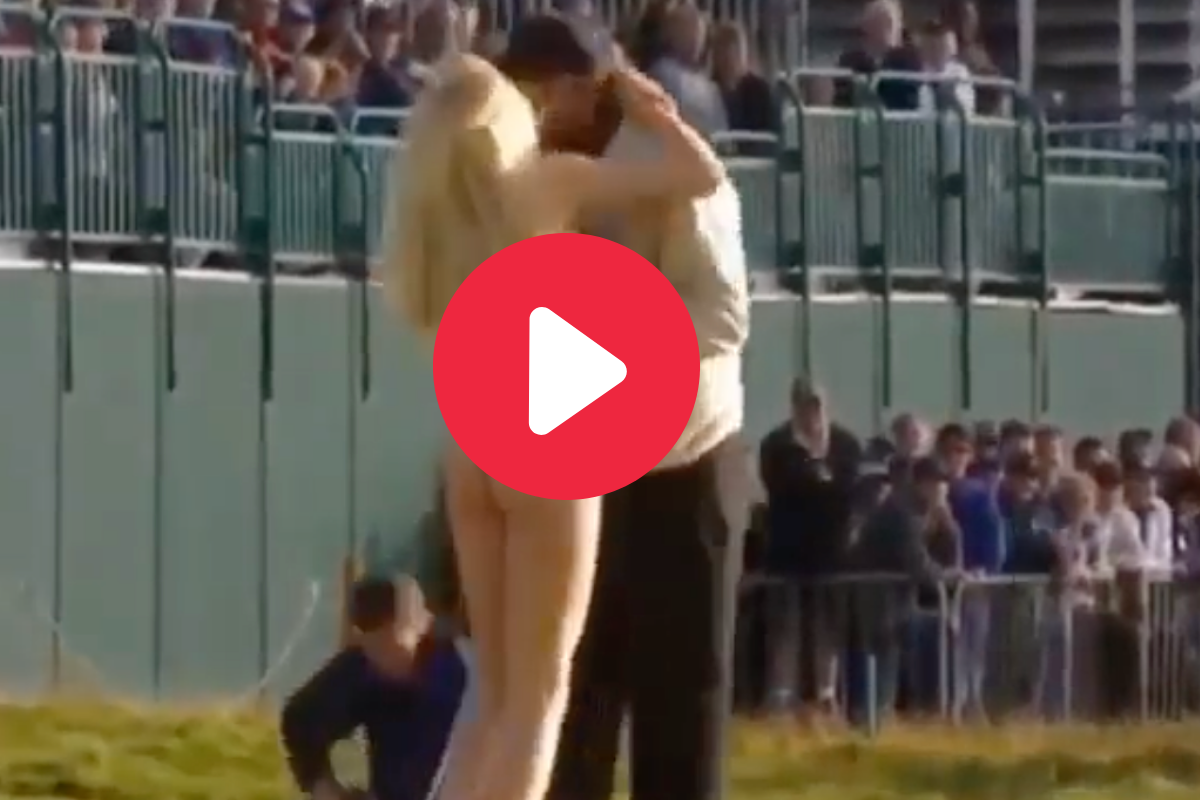 At the height of his career, everyone wanted a piece of Tiger Woods. He turned professional in 1996 and won his first two Major Championships at the 1997 Master’s Tournament and 1999 PGA Championship.

By the turn of the century, Tiger was a worldwide phenomenon. But like the intimidating striped big cat Eldrick is nicknamed after, few could get close to him. Especially in his natural habitat on the golf course.

One blonde-haired, black-thonged streaker at the 1999 Open Championship made it look like a walk in the park when she stripped down to her underwear and approached the 23-year-old budding golf superstar while he lined up a birdie putt.

She even planted a kiss on him and made him miss his putt.

Who Was The 1999 Open Championship Streaker?

Who is the daring damsel here? That would be Yvonne Rob, who was a 20-year-old exotic dancer at the time. Her approach shot was most definitely a hole-in-one.

Robb’s figure captivated the attention of millions of viewers across the globe when she stripped down and greeted Tiger Woods on the 18th green at the British Open at the Carnoustie Golf Links in Scotland.

She even leaned in for a kiss, and Tiger didn’t seem to mind.

Woods said he was chatting with fellow golfer Ian Woosnam when he began to hear him laugh. Then, as he was hunched over, he saw her feet. He described the encounter to the New York Post in July 1999:

?Luckily, she didn?t have a lot on, because if someone comes out of the stand like that and has a lot of clothing on, you never know what they have in there or what they?re hiding behind their back,? Woods said.

?She gave me a hug and a quick kiss, but I wasn?t worried. I knew she wasn?t hiding anything. She didn?t have a whole lot on, so I guess I assumed it was a pretty benign situation.?

“Benign” is one way to describe it.

The infamous streaker was already familiar with clubs, just not the sort that Tiger was used to swinging. Yvonne Robb was a dancer at Private Eyes nightclub in Aberdeen, Scotland. She reportedly later asked him to come see her dance a year later. No word if he followed through.

Tiger Woods finished his day three shots over par. He’d finish the tournament tied for seventh at 10 over par and took home $50,000. Maybe he should have paid Robb’s fine.

What Happened to The Open Streaker?

We bet that Tiger Woods would not have said no to this #streaker at #TheOpen in 2009! pic.twitter.com/1bh8t6cXHb

Robb was fined 100 pounds for her streaking adventure. That’s less than $200, which isn’t much considering streakers today can face fines much higher, as well as jail time.

According to The Herald, “she pleaded not guilty to charges of conducting herself in a disorderly manner, stripping to her underwear, climbing a barrier fence, running onto the playing surface, taking hold of a player and breaching the peace.”

How she pleaded not guilty to stripping to her underwear despite video evidence and a witness named Tiger Woods is beyond me.

Robb appeared to spur the actions of more female streakers the following years.

At the 2000 Open Championship at St. Andrews, a British female streaker named Jacqui Salmond bared it all and even grabbed a flag pole at the 18th hole during the second round of play.

Years later, Kimberly Webster stopped play when she took off her clothes and waved an American flag during the final round of the 2013 Presidents Cup at Muirfield Village Golf Club.

Yvonne Rob is now in her 40s and there isn’t much about her on the web. A Twitter account with the same name hails from Aberdeen, Scotland, but there’s no way to verify if that’s the same woman who planted a kiss at the Open Golf Championship on Tiger Woods in 1999.

Tiger Woods went on to win three more majors in 2000, plus another another 10 in his career. I’m sure he and his caddie remember the first time a fairway fair lady streaked in front of them.

MORE: Streaker?s 15 Seconds of Fame Made Her an Instant Millionaire