Nation’s No. 2 Running Back Commits to Alabama 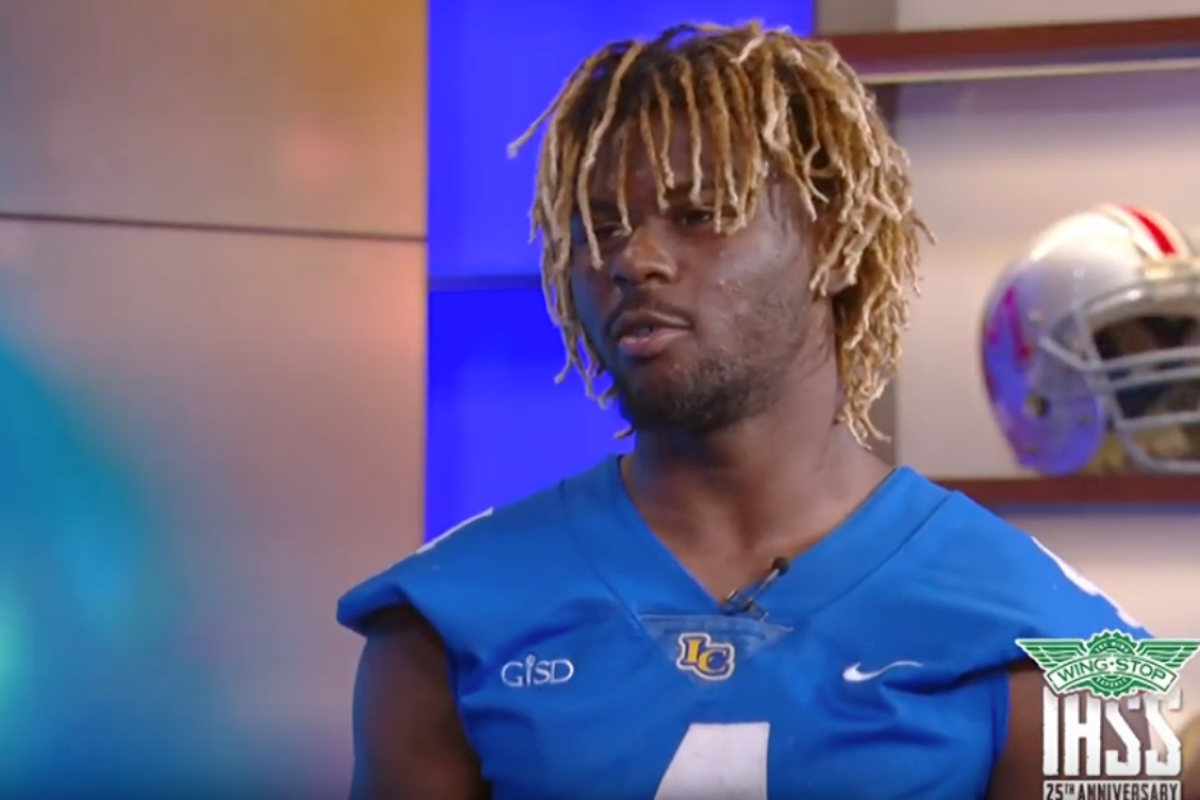 Texas is the Southeastern Conference of high school football states. It’s where memes are made, coaches are paid extremely well and winning is sometimes a matter of life and death. So many great players were born and bred in the Lone Star State, like Texas football legends and NFL players Adrian Peterson, Vince Young and Myles Garrett.

It should be no surprise that the top-ranked running backs in each of the 2020 and 2021 recruiting classes hail from Texas. Zachary Evans is the highest-rated running back from Texas since Peterson, and 2021 top back Camar Wheaton could end up being even better than Evans.

Wheaton, who plays for Garland’s Lakeview Centennial High School, is the No. 2 running back in the 2021 class according to 247Sports and ranks No. 1 (7th overall) by Rivals. He’s a consensus top-20 overall prospect and his services are highly sought after.

The 5-foot-11, 190-pound running back already holds a at least 25 offers from colleges and universities across the nation, and that figure will likely keep growing.

Wheaton has kept quiet about his preferred destination. 247Sports hadn’t made a guess using their Crystal Ball Predictions by the end of his junior season even though Wheaton had visited campuses at Michigan, Notre Dame and the Texas Longhorns.

One thing is for sure, though: he’s a beast out of the backfield for the Lakeview Centennial Patriots. He must be if 247Sports gave him a better composite score than Dalvin Cook, Todd Gurley, Reggie Bush and DeMarco Murray received in high school.

What stands out to Wheaton’s coaches is that he doesn’t act like a normal five-star recruit. He keeps a relatively low profile on his social media accounts, is not all that into interviews and is just a level-headed kid who plays football, despite already receiving his own bobblehead from a local TV station.

The Wolverine’s E.J. Holland called him a “unicorn” in the modern football recruiting era.

“You’re right with your analysis, he’s kind of a unicorn,” Lakeview Centennial head coach Kendall Miller told The Wolverine. “A lot of kids that have his talents get arrogance. But he doesn’t have it. He’s very humble. That makes you want to see him succeed. Because he’s the way that he is, we’re able to treat him like everybody else on our football team.

“There are a lot of people that could take notes and learn from him about how to handle everything.”

Wheaton has lightning speed, as you might expect. He reportedly ran a 4.32 40-yard dash and also runs track for his high school, helping the Patriots to states in the 4×100 relay.

Here’s Wheaton showcasing that breakaway speed by taking the opening kickoff against Wylie High School to the house.

RELATED: America’s Leading Rusher Had 3,000 Yards, But Only 1 Major Offer

Wheaton rushed for 1,142 rushing yards and 15 touchdowns during his junior season, according to statistics kept by the Dallas Morning News.

You might say he has a knack for finding the end zone, like he did for a 14-yard touchdown against North Garland in September.

After rushing for more than 1,100 yards and 14 touchdowns as a sophomore, Wheaton was on-pace to break through and put up monster numbers during his senior season in 2020 before it was canceled due to COVID-19. With major offers on the table and the college football world watching, Texas RB Camar Wheaton will be able to pick pretty much any college in the country to take his talents to.

The Alabama Crimson Tide, LSU Tigers and Oklahoma Sooners are out in front, but Lincoln Riley’s Sooners are believed to have a slight edge with Texas’ top running back potentially staying close to home.

Sorry for the wait & the small error … official top 3 pic.twitter.com/XtmhxjtcJp

Toughest decision of my life and I was torn and I was completely unsure of which school to attend. Thanks to all my coaches, family, friends, teachers and LC administration. #RollTide @saincilaire @CoachKOMiller @LCHS_Patriots @coachdwes @MikeRoyce @Hayesfawcett3 pic.twitter.com/cpG2NvawG6

UPDATE (December 24, 2020): Alabama fans have been given a present just before Christmas, as the nation’s No. 2 running back officially committed to the Crimson Tide on Wednesday night.

Wheaton wrote on Twitter that choosing Alabama was the “toughest decision” of his life. That probably won’t be the case when he’s winning a national championship in a couple years and on his way to a Heisman Trophy.

“Toughest decision of my life and I was torn and I was completely unsure of which school to attend. Thanks to all my coaches, family, friends, teachers and LC administration. #RollTide,” he wrote.

Wheaton waited to commit until after the early signing period, during which head coach Nick Saban reeled in six five-star signees. Only time will tell if Wheaton follows through on his pledge, but athletes like him are the reason ‘Bama is consistently in the playoff against teams like the Clemson Tigers and Ohio State Buckeyes.