Granada Hills Charter School is famous for producing John Elway. The Los Angeles school is about to be famous for its 2022 football team, which is doing something unheard of these days: they haven't completed a pass all season, yet they're playing for a state title.

The Highlanders, coached by former NFL kick returner and sportswriter Bucky Brooks, have brought back old school football by using one of the most formidable run games you'll ever hear of. They finished the regular season 11-2, scoring more than 40 points in 10 of those games. The team's rushing stats this season? 5,412 yards (an average of 416.3 yards per game) and 75 touchdowns. Again, with zero completed passes on just seven attempts.

So, how has this remarkable feat been accomplished given the pass-happy nature of the game today?

Brooks runs the double wing formation on offense. The symmetric set-up consists of a center, two guards, two tackles, two tight ends on either side and two wing backs. A fullback lines up behind the quarterback. Here's what it looks like: 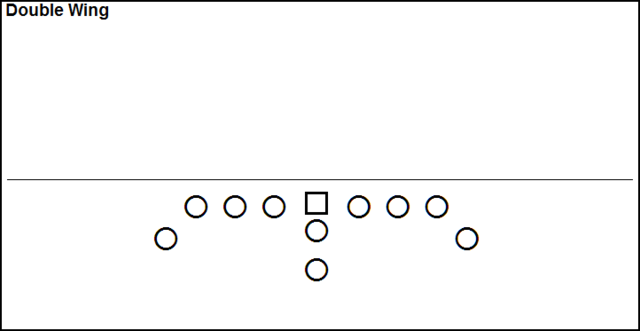 The double wing grew in popularity with the help of Don Markham, the coach who set a national high school football scoring record with 880 points in 14 games in 1994. The formation requires big, physical blockers as you might expect.

It also helps to have one of the best running backs in the state of California. Granada Hills' run game is led by Dijon Stanley, a Utah commit who has rushed for nearly 200 yards a game and has 32 touchdowns in total, according to USA Today.

The kids have all bought in to the strategy, too.

"We've been doing this all year," Stanley told the Los Angeles Times. "It's not really weird to us. We always say we would rather be great at one thing than be good at a lot of things."

Props to Brooks and the Highlanders for this season. Granada Hills still has to play in the Div. 4-A CIF State Football Championship Bowl Game and a semifinal game this Saturday. Next weekend is the state championship game.

The most incredible statistic is Granada Hills, the home of John Elway, still hasn't completed a pass this season and is playing for a state title next weekend. Bucky Brooks is either a genius or having fun with everybody.

Let's see if anyone can stop the double wing offense.

MORE: 96-0 at Halftime? Officials Call Off High School Game After Humiliating Half