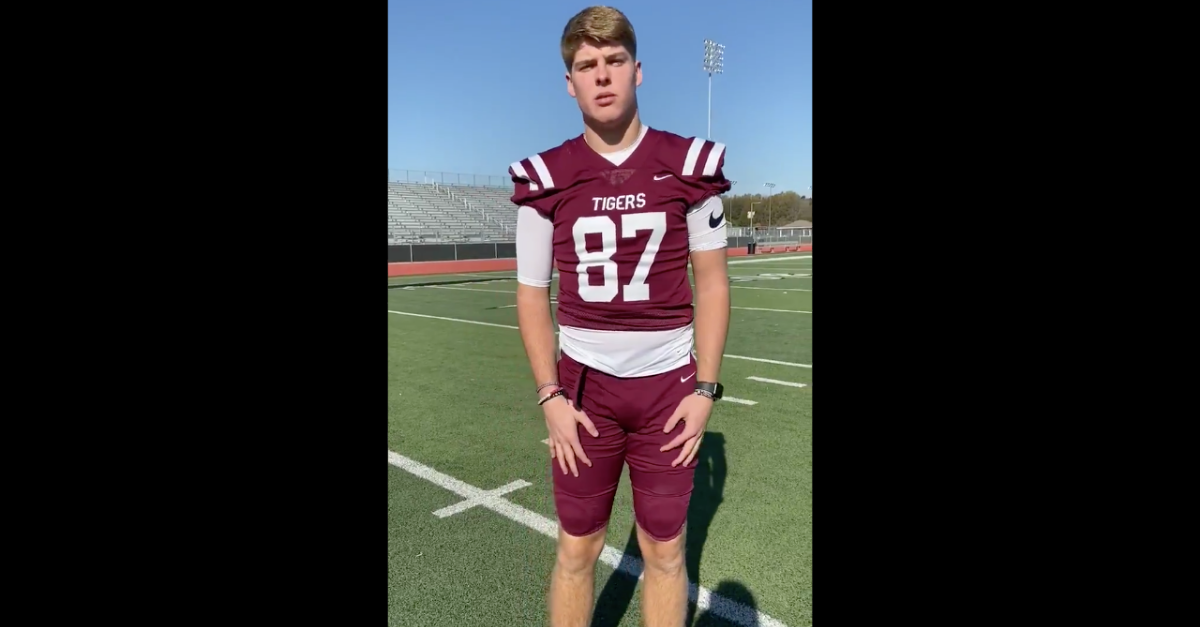 Georgia turned in the nation’s top recruiting class for 2020, and head coach Kirby Smart seems intent on keeping that momentum for the 2021 group of high school players. So far, the Georgia Bulldogs are potential players for the No. 1 wide receiver, a top-10 receiver and a four-star linebacker after already securing a commitment from five-star quarterback Brock Vandagriff, who looks like Matthew Stafford 2.0.

Four-star tight end Hudson Wolfe could add his name to that list of potential Dawgs. The 6-foot-6, 245-pound player out of Hardin County High School (Savannah, Tenn.) can catch anything thrown in his direction and is rated the No. 9 player at his position and No. 225 overall player for the 2021 class, per 247Sports.

With a body similar to Rob Gronkowski‘s, this high school junior is a touchdown machine and a quarterback’s best friend in the red zone. His frame provides him the ability to run block with the best of them, too. Off the field, he’s a standout student who boasts a 4.0 GPA.

Looks like Tennessee has 2 2021 all American TE prospects. The other is Hudson Wolfe 6‘6“ 240 Savannah, Harden co. The complete TE he can run, catch and block. Very good hands and body control. Downfield threat.Also 4*+.@HudsonWolfe80 4.0 GPA one of the nations best. pic.twitter.com/PPT1e1Ezao

Wolfe is as hot a name as anyone in his class.

​Wolfe narrowed his choice down to five schools, with four SEC programs joining the OSU Buckeyes:

Wolfe planned to begin taking more official visits in April, which were corralled by the coronavirus. He’s unofficially visited each school on his list, and even Nick Saban and Jeremy Pruitt visited Hardin County to watch him play.

The No. 6 overall player in the state of Tennessee grew up a Tennessee Volunteers fan and he would likely play right away for his hometown college football team. However, he told USA Today he’s looking for more than that in a school.

“I am looking for a place that can develop me as a player and a person,” Wolfe said. “I want them to develop me off the field as much as on the field. I want a program that is historically successful.”

According to 247Sports‘ Crystal Ball predictions back in March 2020, the four-star recruit wouldn’t stay in-state and head to Columbus to join Ryan Day’s Buckeyes.

College coaches likely salivate when they see Wolfe’s size on the gridiron.

Defensive backs have no chance stopping the massive, 6-foot-6 tight end when he goes up for a ball in the air. Where he lacks speed and separation, he makes up for it with great hands.

Last season at Hardin County High, Wolfe reeled in 27 catches for 471 yards and 12 touchdowns en route to helping his team reach the Class 4A state quarterfinals in 2019, according to USA Today.

Wolfe projects as a Power 5 starter and potential NFL Draft pick, according to 247Sports‘ evaluation:

“Tall, long tight end body with a big catch radius and a body type that is still maturing. Has the frame to be a future offensive tackle but isn’t too bulky to stay at tight end. Has plus feet and fluidity for a long body. Flashes some catch-and-run athleticism. Consistent pass catcher. Sinks hips as a blocker and can lock on to smaller defenders. Finishes blocks. Best suited as a traditional in-line tight end but is comfortable with blocking angles and pass concepts as an H-back. Lacks separation quickness. Not a lot of evidence of rare athleticism. Size is biggest asset. Very competent tight end that has the look of a consistent Power Five starter and a body type that presents some positional versatility.”

Wolfe still has room to put on weight and time to improve his quickness, which makes the thought of his senior season even scarier.

One of the best players in the state of Tennessee could be headed to the SEC, and Georgia makes a ton of sense considering Wolfe will always have a top-tier talent throwing passes his way.

This article was originally published March 31, 2020.

UPDATE (June 15, 2020): Wolfe announced his verbal commitment on Twitter to the Tennessee Volunteers via Rivals, which ranks him as the No. 1 tight end nationally.

Exclusive: The nation's No. 1 TE, Hudson Wolfe @HudsonWolfe80, is ready to make his commitment decision.

Watch him make his pick between Ohio State, Alabama, Tennessee, Ole Miss and many others with @rivalswoody below 👇👇👇 pic.twitter.com/YJ0nYiA3xB

Don’t look now, but Jeremy Pruitt’s program holds the third-ranked recruiting class nationally, according to 247Sports, trailing only Ohio State and Clemson heading into the summer.