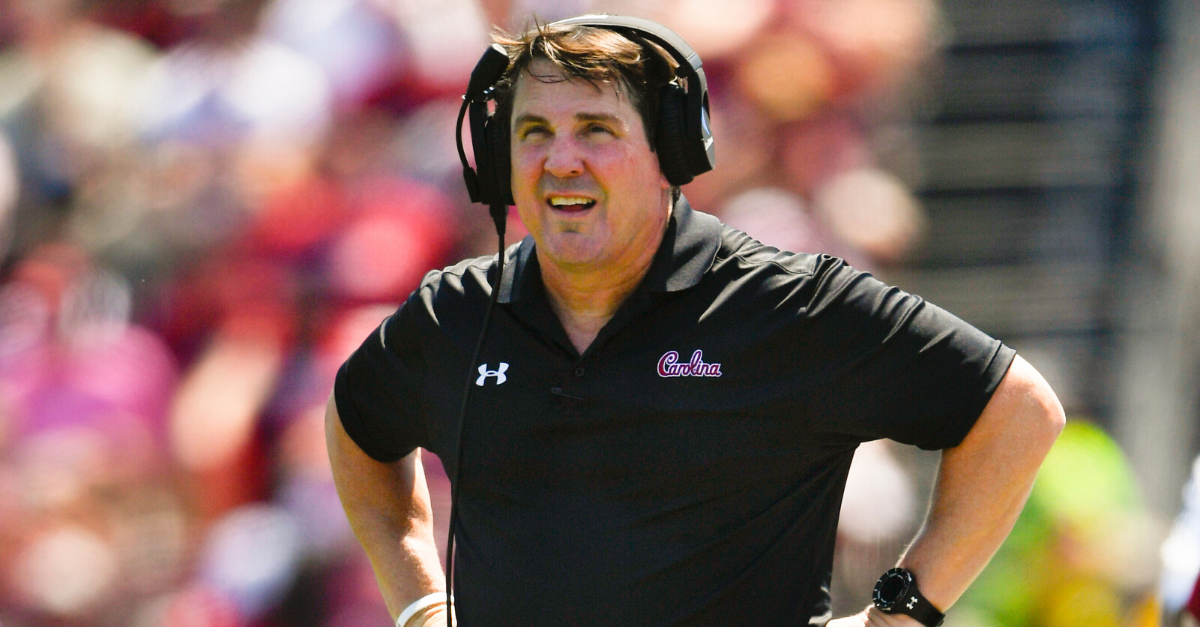 Jackson Muschamp isn?t what many would consider a high-profile recruit. His offer list doesn?t exactly jump off the page. The oldest son of South Carolina Gamecocks head coach Will Muschamp deserves a lot of credit, though, and he?s ready to make a name for himself.

Instead of committing to play for his dad as a walk-on in the SEC ? something many sons choose to do ? the 6-foot-1 quarterback from Hammond School in Columbia, South Carolina is carving his own path for NCAA college football success.

After taking an official visit in late January, Muschamp announced he was committed to play for the Colorado State Rams under head coach Steve Addazio.

Very excited to announce that I am committed to Colorado State University!!! Go Rams! #ProudToBe pic.twitter.com/uIFJxzs4do

Then, the day before National Signing Day, the young Muschamp flipped his commitment. He will now be playing in the SEC after all, but as a preferred walk-on for the Georgia Bulldogs and head coach Kirby Smart.

BREAKING: Jackson Muschamp has committed to the Georgia Bulldogs over Colorado State. Find out why the opportunity to play in Athens was too much to pass up for the 2020 QB. @Dawgs247 (FREE)https://t.co/vk5Jf6OOwv pic.twitter.com/abtbkK2U8f

A three-star prospect, Muschamp is currently ranked as the No. 97 pro-style quarterback in the 2020 recruiting class, according to the 247Sports Composite. The high school senior fielded additional offers from Boston College, Jacksonville State, Middle Tennessee State, Samford, Western Carolina, and Wofford.

At the, the connection to Colorado State made. Boston College was Muschamp?s only Power 5 offer. Addazio is now the head football coach for the Rams. Additionally, Mike Bobo, who was fired from CSU, is now the offensive coordinator at South Carolina.

At the end of the day, however, Muschamp just wanted to find a good home for the next level. He turned down a full scholarship to go to CSU and felt comfortable with the UGA coaching staff in Athens to flip his commitment at the last hour on Tuesday night.

The University of Georgia is also his dad’s alma mater.

“When I decided not to go to Colorado State, I did it pretty quickly after I had returned from that visit,” Muschamp said.”I just realized what type of commitment it was to go away from home. I love the people, the coaches, and Colorado State This decision had nothing to do with that. That is a special place…

“…Just thinking about it more, that opportunity to go to Georgia, and I have always wanted to go there,” he said.”They never really stopped recruiting me since I went to camp there last summer. It was just an opportunity I could not really pass up. I am fortunate enough to be in a situation where I could go walk on somewhere like Georgia in the first place. I am super excited about it.”

Only time will tell what Muschamp?s career will be like and how many touchdowns he will throw on his new Georgia football team, but there?s no doubt he?s looking to write his own story.