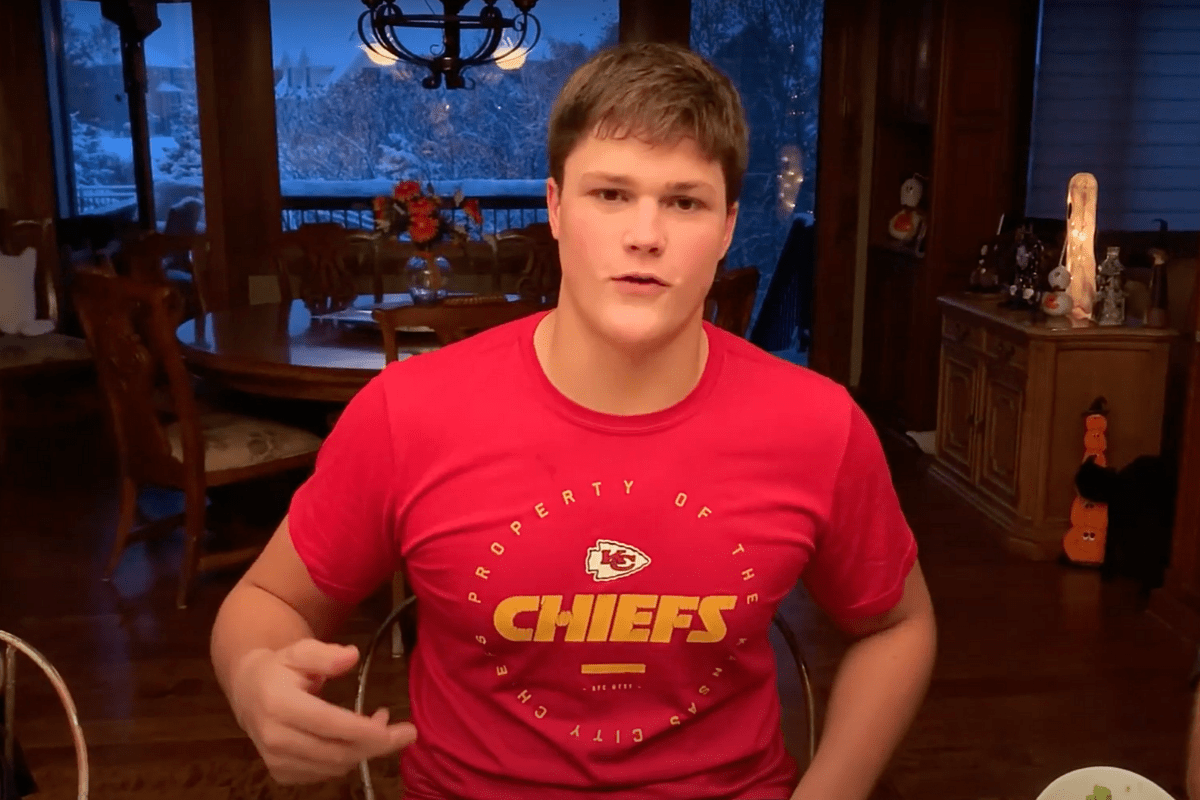 Joe Alt is one of the largest members of the 2021 recruiting class. At 6-foot-7 and 283 pounds, the offensive tackle has dominated at Totino Grace High School in Fridley, Minnesota. Not many high school football players can say that boast that kind of size.

Joe is also the son of John Alt, the former NFL Pro Bowler left tackle who played 13 seasons for the Kansas City Chiefs and even protected Joe Montana‘s blind side. Joe’s brother, Mark Alt, is a defenseman in the NHL. Joe took advantage of those bloodlines and had many NCAA suitors to choose from.

In July 2020, he committed to joining the Notre Dame Fighting Irish and signed with them in December 2020.

In addition to the Irish, Alt received offers from Power 5 programs like Iowa, Iowa State, Kansas State, Minnesota, Missouri, Northwestern, Rutgers, and Wisconsin. Alt may live in Minnesota, but the Gophers were not able to pry him away from his South Bend commitment.

Joe’s father played at Iowa, where he blossomed into a first-round pick (21st overall) in the 1984 NFL Draft. He played a lengthy career that included two Pro Bowl selections at left tackle and was inducted into the Kansas City Chiefs Hall of Fame before going on to coach the offensive line at Totino-Grace High School, where his son was playing.

On This Day: Kansas City #Chiefs also draft John Alt in the first round of the 1984 #NFL Draft pic.twitter.com/mwLncN4Kye

The coronavirus pandemic altered the number of visits Joe Alt was able to make to schools, but thankfully he committed without any issues.

The Notre Dame recruiting class has grown into a mightily impressive group. Head coach Brian Kelly and offensive line coach Jeff Quinn are going to work with Alt, Rocco Spindler (whose father also played in the NFL) and Caleb Johnson in hopes of sustaining the team’s success. The Irish can reach the College Football Playoff but have had issues winning games there.

Before Joe Alt’s days as an offensive lineman, he played tight end, so he possesses more athleticism than the typical tackle. The three-star prospect and No. 6 overall recruit in Minnesota can fight off defensive ends and can even permeate through and challenge linebackers. His work as a blocker has been lauded, and with some work, he has NFL potential.

Joe Alt adds to an already solid recruiting class for Notre Dame, a team that should have no problem carrying over their momentum into next season. If he can land a starting job early in his career, the sky will be the limit for him.

Now, will he be as good as dad?

MORE: 5-Star Receiver Has Monster Offers, But He’s in No Rush to Commit