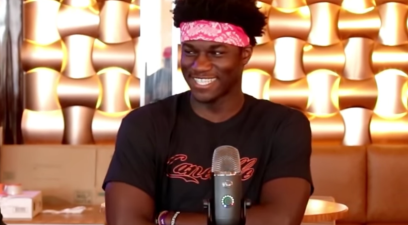 Shemar Stewart is Florida’s Top Junior, And It’s Not Even Close The best college football programs are able to recruit five-star athletes. No one knows this better than Nick Saban and the Alabama Crimson Tide, who consistently reel in the top recruits every year. LSU, too, has welcomed top-flight high school recruits in recent years under head coach Ed Orgeron.

One premium position every SEC team vies for each recruiting class is defensive end. Without a pass-rushers like former Texas A&M Aggie Myles Garrett, who was an absolute freak in high school, defenses struggle to disrupt quarterbacks in a league that’s grooming great ones like Tua Tagovailoa and Joe Burrow.

For the class of 2021, every school has the same defensive end on its board: Landon Jackson. A four-star defensive end out of Pleasant Grove High School (Texarkana, Texas), Jackson is ranked the No. 5 weak-side defensive end and 18th overall prospect in Texas, according to the 247Sports Composite.

5-star DE Landon Jackson (@landonjackson40) was once again right in the middle of it a lot of what Pleasant Grove did. #UILState pic.twitter.com/CqI6qWkQjx

Here’s the thing: Jackson has a crazy big body for a high schooler. He’s a 6-foot-6 beast who weighs in at 240 pounds, and he uses every ounce of his body coming off the edge. Recruiting website 247Sports notes in its evaluation that Jackson has an elite frame as a “natural pass-rusher who flashes impressive quickness off the line.”

Unsurprisingly, every NCAA coach in America is hot on Jackson’s trail. He holds nearly 30 offers from programs like Alabama, LSU, Ohio State, Texas, Texas A&M, Arkansas, Baylor, Texas Tech, Texas State, Tulsa, Florida State, Notre Dame and Oklahoma among others, though 247Sports lists those first five as the schools he’s most interested in.

On Twitter, Jackson announced his commitment to Ed Orgeron’s team and the defending CFP National Champion LSU Tigers heading into the summer. With still a year left before graduation, Jackson’s intentions were clear: He wants a ring.

Jackson comes from an athletic family, too. Many thought College Station held a special place in Jackson’s heart given that Jackson’s father, Larry, played basketball for the Texas A&M Aggies. However, LSU was apparently too attractive to turn down.

A first-team selection in his Class 4A, Jackson helped lead the Pleasant Grove Hawks to a 15-1 record and state championship this past season. The MaxPreps Junior All-American racked up over 100 tackles and 16 sacks in 2019.

Jackson profiles as a future NFL defensive lineman and will provide instant pressure along LSU’s defensive line. He unofficially visited a few programs like the Texas A&M Aggies, Texas Longhorns and LSU Tigers, and despite all signs pointing to Jackson wreaking havoc in the Lone Star State, he ultimately was reeled in by Orgeron’s staff.

Good luck to opposing quarterbacks who have to face this kid.

This article was originally published January 10, 2020, but has been updated since Jackson’s commitment.

MORE: America’s No. 1 Player Signed with Georgia, But Won’t Play There