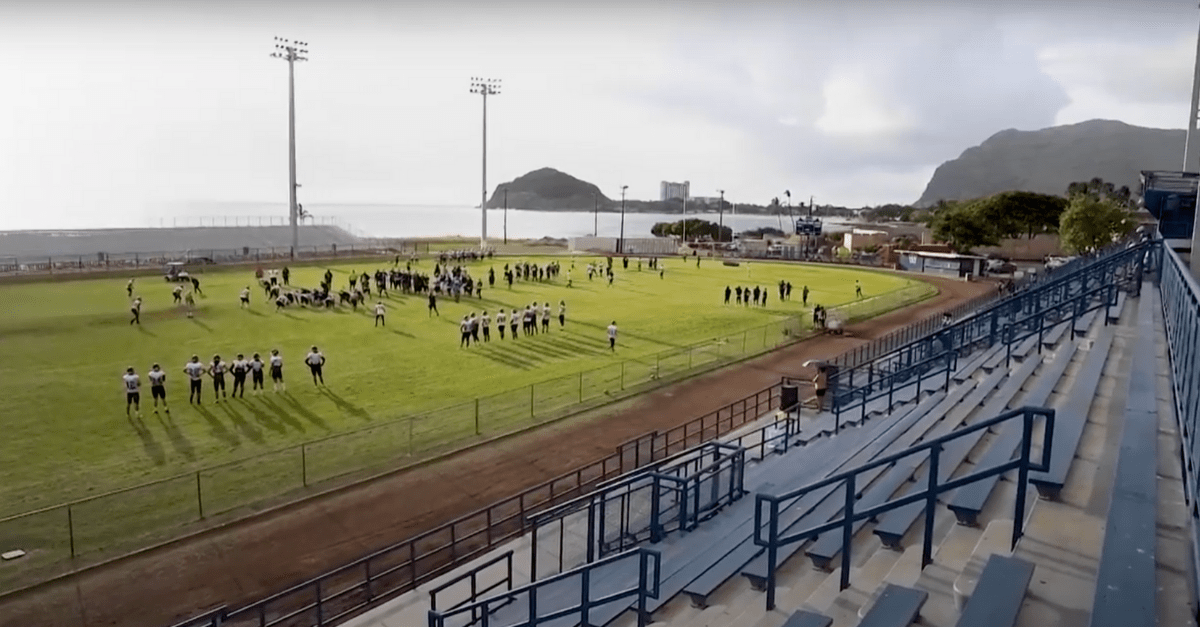 High school football is a beautiful, beautiful thing. From trick plays to your hometown stadium, those Friday night lights create memories that last a lifetime. There is a place in Hawaii that makes all of those things look even better.

Raymond Torii Field is the home of the Waianae High School Seariders in Honolulu County. It doesn?t boast the bells and whistles like many traditional football stadiums, but what it does have is beautiful scenery and an immense amount of pride that has been passed down for generations.

With the Pacific Ocean on one side and mountains on the other, this football field on the leeward coast of Oahu is truly one-of-a-kind.

According to KHON 2, Raymond Torii Field is named after the school?s first principal. It?s filled with history, too. It?s one of America?s best high school football stadiums, but not many truly knew it until recently.

Thanks to a video produced by MaxPreps and a bracket created by USA Today High School Sports, the stadium, and all of its beauty, is getting the recognition it properly deserves.

That?s quite the accomplishment for the small high school, and it?s something Waianae High School athletic director Kekoa Kaluhiokalani is very proud of.

?The location is unbeatable,? Kaluhiokalani told KHON 2. ?You got the pacific ocean one way, and you turn the other way and you got the mountains and the valleys, and when you see the sunset ? all those things make it more meaningful to the people who come to this school who actually played sports on the field, whether that?s football, soccer, track and field, or cross country.

?I graduated here, coached here, was born and raised in Waianae. It?s pride. We?re being recognized for something that means a lot to a lot of people in our community. Waianae is known for football. To the teams and the players that have come to the program, are in the program now and will be coming to the program in the future, it?s about tradition. It?s about family, it?s about one team, it?s about being proud of where you come from and who you represent.

?There?s generations of kids coming up where their grandparents played in the program. In the 70s, 80s, and 90s we had a successful program, so there?s a lot of pride and a lot of proud people here.?

When the coronavirus pandemic and COVID-19 outbreak end, you better believe the Waianae Seariders will be ready show off their beautiful stadium to the world once again.