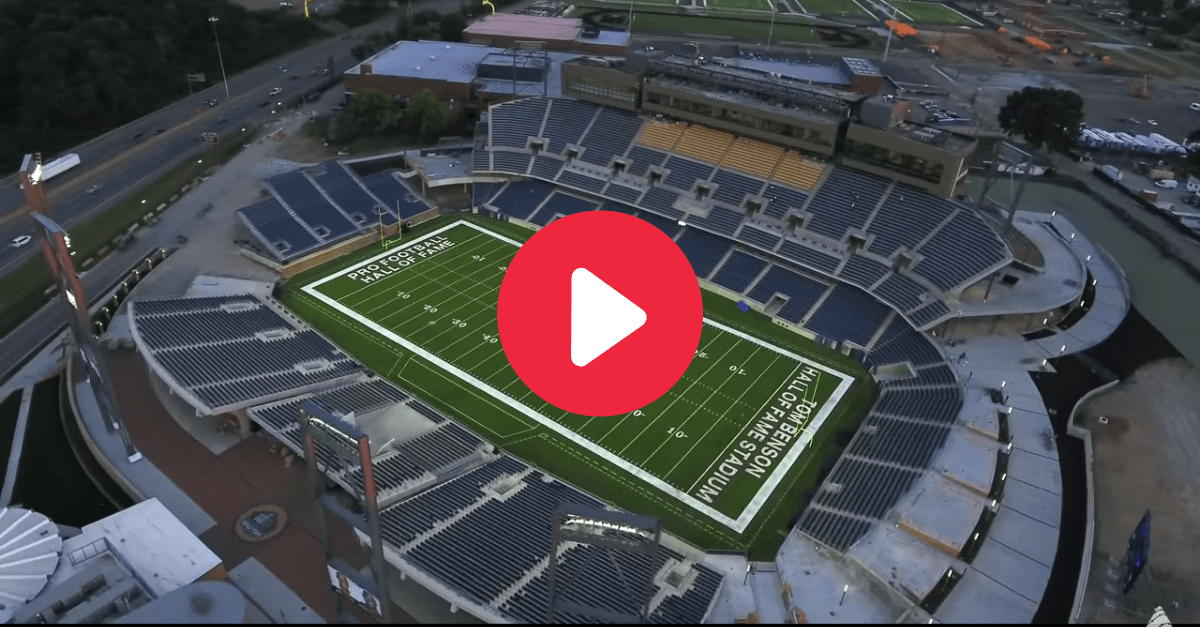 I know the saying in the SEC is “it just means more,” but that might not be the case if you look at some of the most lavish high schools across the United States. Everyone knows high school football is king in Texas, where coaches make an absurd amount of money and a gigantic $80 million stadium resides.

Don’t get me wrong. Eighty million dollars is a lot of money to pay for a complex that hosts a bunch of teenagers every Friday night. However, even the Berry Center doesn’t stack up against the massive, one-of-a-kind behemoth stadium that houses Ohio’s Canton McKinley High School.

Did I mention that it cost $137 million?

First opened in 1938 under the name Fawcett Stadium, this monster was at one point the biggest high school stadium in the country with a seating capacity of 15,000. The project cost $500,000 at the time, which was a massive amount of money for a non-collegiate or professional stadium.

The entire stadium, of course, is breathtaking. I can’t even fathom playing every home high school game in a venue like this one, and the Canton McKinley Bulldogs — where Josh McDaniels and Pro Football Hall of Famer Marion Motley played — are lucky to do so.

Sporting News ranked it the No. 1 high school football venue in America back in 2002. Forbes called the sports complex one of 13 “game-changing NFL stadiums.”

Today, it seats 23,000. An NFL-caliber press box sits perched above one side. There’s a VIP lounge for all the food, beer and wine a fan can inhale. The luxury suites provide the most privileged fans with flat-screen TVs and a view of Canton.

Just take a peak at this beauty. There’s a reason it’s considered a football stadium and an entertainment complex. Tom Benson Hall of Fame Stadium belongs in the stadium hall of fame if you ask me.

Sneak Peek of the statue of New Orleans Saints owner Tom Benson that will overlook the field at Tom Benson Hall of Fame Stadium. pic.twitter.com/iw9pT6FbMP

It wasn’t until 2015 that the football stadium took on its current name.

New Orleans Saints owner Tom Benson, who passed away in 2018, donated $11 million to the Pro Football Hall of Fame in 2014. All but $1 million would be used toward renovating the stadium as part of a broader $200 million expansion project. The Hall of Fame then officially renamed it in Benson’s honor in 2017.

Back in 1997, the stadium received a major facelift. The $4.3 million renovations included a state-of-the-art Astroturf, new locker rooms and a new display screen scoreboard and sound system.

Tom Benson Hall of Fame Stadium has hosted numerous national sporting events during its lifetime. During the 1990s, it hosted the Victory Bowl AKA the NCCAA championship football game. Barring any coronavirus cancellations, it will also hold the NCAA Division III Football Championship.

We are one hour away! Massillon fans are already finding their seats here at Tom Benson Hall of Fame Stadium where the Tigers will take on Cincinnati La Salle in our @SarchioneFord championship game of the week! @MassillonProud@MassillonSchool@Massillon_Tiger
@MassTigers2019 pic.twitter.com/bC3e4fOH42

While it houses high school football, college football and professional football, Tom Benson Hall of Fame Stadium’s true greatness is on full display every August to kick off the NFL season. This year’s installment of the Hall of Fame Game will pit the Pittsburgh Steelers against the Dallas Cowboys.

If you ever find yourself planning a road trip to Canton, as every NFL fan should at some point in their life, make sure to stop by the immaculate Tom Benson Hall of Fame Stadium. It will be well worth your time.