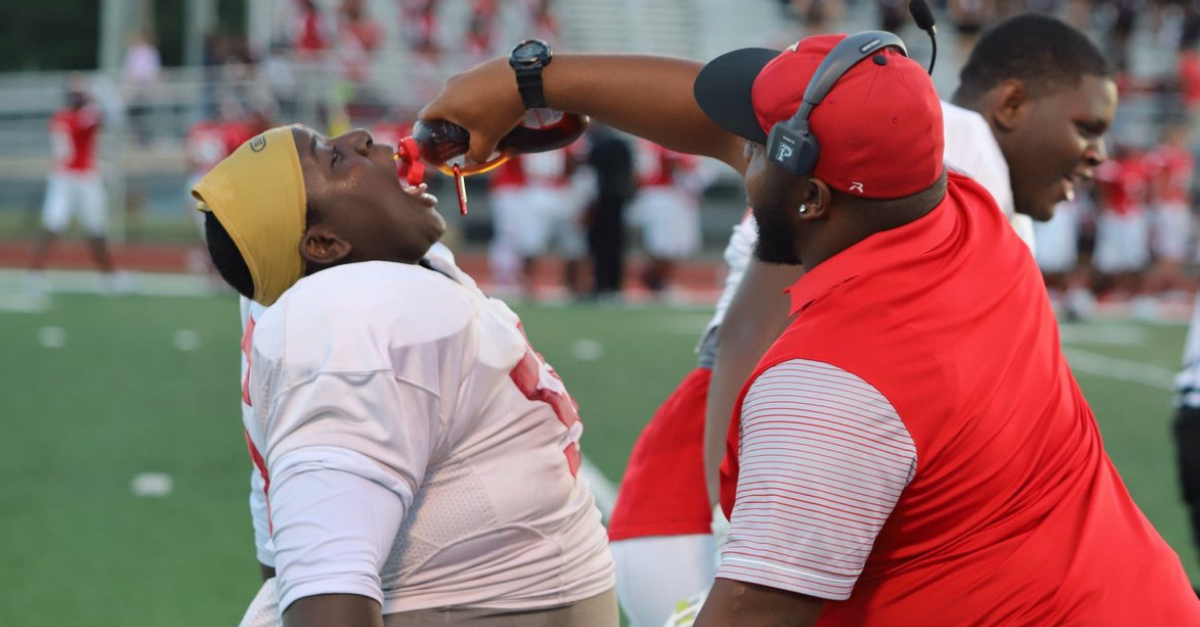 The game of football is famous for creative imaginations. There are famous turnover chains, thrones, robes, backpacks, creative entrances and absurd touchdown celebrations. Aunt Jemima has now joined the party.

At Jonesboro High School in Georgia, offensive line coach Darrian Carmicheal gives out shots of maple syrup for pancake blocks and touchdowns. This is an actual thing, and it?s incredible. The big guys need some love, too.

S/O to @WeAreBigGuys & @linemanissues for making me go viral! You have the turnover chain but my oline at @JHSCardinalFB has SYRUP! Olineman go unnoticed but we have our own way of shining!

A pancake block, of course, is when an offensive lineman leaves a defensive player on his back, primarily during run plays. But for an assistant coach to feed them syrup shots on the sidelines during the game? That is some next-level stuff going on with the Cardinals down in the Peach State.

It also has made some players jealous of how cool Carmicheal is for this.

My man gives out shots of syrup for pancakes 😂😂🥞🥞 Happy Game day to my high school followers and coaches! pic.twitter.com/OJoGC2py4b

Sheer brilliance is an understatement.

?I believe (in) this day and age when coaching kids you have something extra for them to look for or an incentive to make them go harder. You should see my boys? eyes ready to run to the sideline! If you have played football before or the offensive line, you know we do not get all the praise and accolades when we do most of the work. This is just something to make them proud and feel appreciated because NO ON GETS THE SHOT BUT THEM. It makes me happy knowing that they are doing their assignment and having fun doing it.?

This is what it?s all about. Seeing high school coaches connect with players is special. Who wouldn?t want to play for Coach C?

Having this go viral is a beautiful thing. It also puts a lot of pressure on Carmicheal to never, ever forget the Aunt Jemima on game days so he can pass out actual maple syrup shots to his offensive linemen.

This article was originally published September 11, 2018.