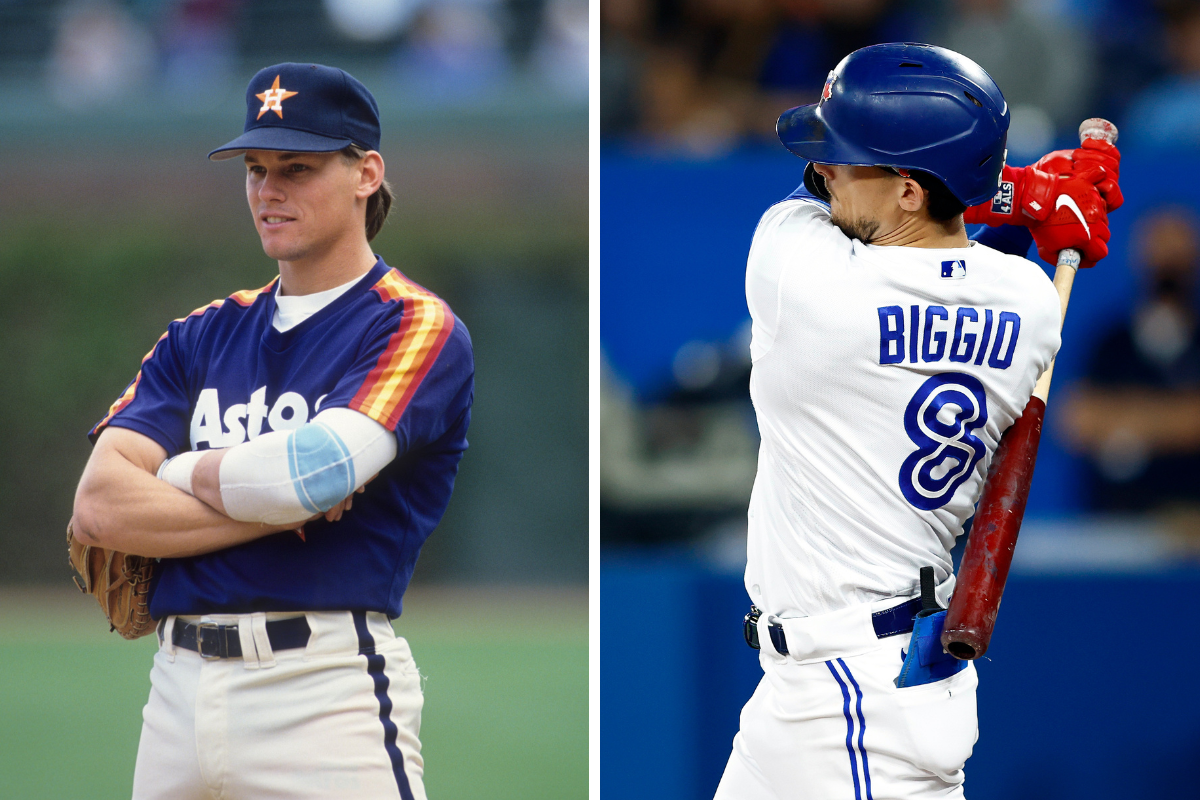 Baseball Hall of Famer Craig Biggio needs no introduction. His 3,060 hits, seven All-Star selections and four Gold Gloves do all the talking.

One of the key “Killer B’s” from the Houston Astros of the late 1990s and early 2000s, Biggio put together a legendary career that was worthy of induction into the Baseball Hall of Fame in Cooperstown, NY.

The 56-year-old Biggio’s Major League Baseball legacy is far from over, though, because his son, Cavan Biggio, is carrying it on with the Toronto Blue Jays.

Related: The Sons of Pedro, Manny and Big Papi Are Playing on the Same Team

Cavan is the son of Craig and Patty Biggio.

Craig and Patty, a nurse, dated in college at Seton Hall University before moving to Houston when Craig got the call to the big leagues in the late 1980s.

They had Cavan in 1995, two years after the birth of their first son, Conor Joseph Biggio, in 1993. Conor played baseball at Notre Dame and was drafted to his dad’s franchise, the Houston Astros, in the 34th round of the 2015 MLB Draft, though he never had much of a minor league career.

Cavan has admitted that Patty has been the backbone of the family throughout its wild baseball ride.

“It’s not an easy lifestyle at all,” Cavan told the Houston Chronicle. “She let my dad be himself and focus on that baseball player that he had to be. That goes a long way with how he was able to perform. Things that she did were just as hard as what he did.”

A couple of decades later, she’s watching her son do a lot of similar things her husband did.

Cavan’s path to The Show was a pretty typical one.

He played both baseball and football at St. Thomas High School in Houston, Texas. He then headed to Notre Dame, where he hit .272 with 15 home runs as an infielder during his Fighting Irish career.

The Blue Jays drafted him in the fifth round of the 2016 MLB Draft. After a few years of seasoning in the minor leagues, he was called up to make his Major League debut in 2019, making the Blue Jays the first team with two sons of Hall of Famers (the other being Vladimir Guerrero Jr.).

As a rookie, the second baseman broke onto the scene by hitting 16 home runs with a .234 batting average. He placed fifth in American League Rookie of the Year voting. That same season, he also hit for the cycle, which made the Biggio father-son combo the second father-son duo in MLB history to do so (Gary Ward and Daryle Ward also did it).

More than 18 years after his dad Craig did it, Cavan Biggio has hit for the cycle 🔄

RELATED: What Happened to Jeff Bagwell and Where is He Now?

“It was crazy. It was one of those things that if it’s meant to be, it’s meant to be,” Craig Biggio said told the Houston Chronicle. “One reason it was so cool and special and what made it the best is that his mom was in New Jersey and drove down to spend a couple of days with him. And the next thing you know, she has the best seat in the house for something that was pretty historic.”

Cavan is entrenched in a Blue Jays roster littered with famous fathers. Of course, there’s Vladdy Jr., Bo Bichette, the son of former MLB slugger Dante Bichette, is also a mainstay in the lineup.

Cavan and his dad look physically different — the elder Biggio stands 5-foot-11 and was lucky to break 190 pounds back in the day — while Cavan is taller and bigger. But Cavan is a second baseman like his pops, and he had one of the greatest infielders ever teach him how to field his position growing up. In fact, he can play pretty much anywhere on the field.

The young Biggio has a long way to go if he wants to become known more than “Craig Biggio’s son,” but there’s no telling how good he can be.

This article was originally published on April 8, 2022, and has been updated since.