This year's MLB Draft class is littered with legacy prospects. Everywhere you look, there's a son of a former MLB player who has an identical swing to his dad.

Druw Jones might be the best of the bunch, and he looks like a carbon copy of his father, Andruw Jones. Justin Crawford might be a bit taller than his dad, Carl Crawford, but he's a speedster with a sweet left-handed swing like his pops.

Jackson Holliday is the son of seven-time All-Star and World Series champion St. Louis Cardinals outfielder, Matt Holliday,  and looks nothing like his dad on the field. And yet, according to mock drafts and analysis, he's considered one of the top-rated MLB draft prospects ready to dominate at the next level.

Jackson is one of four children to Matt and Leslee Holliday.

Standing 6-foot-1 and 180 pounds, Jackson's build is nothing like that of Matt, who stood 6-foot-4 and 240 pounds during his playing career. Jackson is a much more athletic baseball player and plays shortstop.

A mammoth night for Stillwater HS shortstop Jackson Holliday last night blasting 3 homers. Holliday is having an enormous spring and has seen his stock soar in evaluators' eyes.

At Stillwater High School in Stillwater, Oklahoma, Jackson has routinely put his smooth, fluid left-handed swing on display. In fact, his stroke looks a lot more like Justin Smoak's than the elder Holliday.

Jackson hit the ninth home run of his senior season on April 2. This was just less than a week after he hit three home runs in a single district game against Tulsa Union. 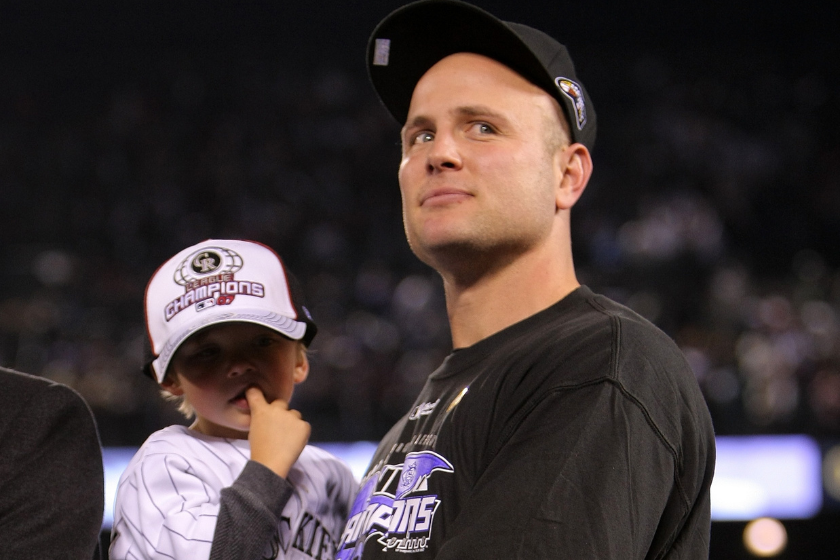 RELATED: Carl Crawford's Son Has All of His Dad's Tools to Be an MLB Great

Growing up the son of a Major League Baseball star had its perks, as Jackson could look up to Matt's teammates like Nolan Arenado, while his dad played the final year of his career with the Colorado Rockies.

But Matt recalled on the Table Forty podcast that even from a young age his son had a better swing than he did.

"I remember thinking, 'he's got a better swing than I do.' He's like three at the time and he just naturally got into position," Matt said.

Nearly 15 years later, Jackson Holliday is about to embark on his own baseball path.

RELATED: Carl Crawford's Son Has All of His Dad's Tools to Be an MLB Great

Jackson committed to Oklahoma State in what will be a family affair if he chooses to head there over the MLB Draft.

His uncle is Josh Holliday, the current head coach for Oklahoma State baseball who played for the Cowboys and briefly in the Toronto Blue Jays organization. Matt currently serves as a volunteer assistant coach on the staff, which also includes Robin Ventura as a student assistant.

"I'm very excited. We pretty much do work every day," Jackson said of joining his dad, via the Table Forty podcast.

To add to the family affair going on in Stillwater, Jackson's younger brother Ethan also committed to Oklahoma State. Ethan is a class of 2025 infielder and pitcher who still has a few years before college.

Jackson will be incredibly tough to sign for any MLB teams looking to land him in this year's MLB Draft, for all of those reasons above. In April 2022, MLB.com ranked him the 51st best MLB Draft prospect. That has since changed as the site has him ranked No. 2 behind Druw Jones and calls Holliday one of the "best hitters" in the class.

Jackson may not ever hit 316 home runs or play 15 years in MLB, but it'll be fun to watch him develop.