I've always wondered what it will take for a woman to play in Major League Baseball. We've heard stories of ones who may have had a shot -- like the girl who struck out Babe Ruth and Lou Gehrig, Jackie Mitchell, and the milestone-setting Ila Borders -- but never before has one suited up in the big leagues.

A woman will play in MLB one day, and I think the first will be a knuckleball pitcher. Why? Because as we saw nearly a decade ago, that almost happened. This is the story of Eri Yoshida, the "Knuckle Princess" with a devastating sidearm knuckleball who made history in men's professional baseball.

RELATED: Mo'ne Davis Took Her Talents to an HBCU After Her LLWS Dominance

Yoshida was just 16 when she was drafted by the independent league team Kobe 9 Cruise in the Japanese League in 2008, making her Japan's first female professional baseball player.

She became a knuckleball pitcher after watching Tim Wakefield when she was younger. The 5-foot, 114-pounder quickly found success on her high school baseball team and on a private club before taking her talents professionally. As one minor league baseball publication wrote, her knuckleball was "considered almost unhittable when she is on." In her debut for Kobe Cruise 9, she walked one batter and struck out another as 12,000 fans looked on.

"I'm really happy I stuck with baseball," Yoshida said in a news conference after being selected in the league's draft, via ESPN. "I want to pitch against men."

Yoshida's career even took her overseas back to the states. In 2009, she and the Arizona Winter League came to an agreement where she'd play with the Yuma Scorpions. The AWL was an independent instructional baseball league that notably produced MLB reliever Sergio Romo. She picked up her first win in the league after throwing four scoreless innings against Team Canada.

Again, Yoshida wasn't done there. She signed a contract the following year with the Chico Outlaws of the Golden Baseball League, making her the first female pro baseball player since Ila Borders.

I know the question you've been wondering this whole time: was Yoshida actually any good? According to statistics kept by Baseball-Reference, I'd say she was...wild. In her first season with the Outlaws, she walked 21 hitters and hit 15 of them while posting a 12.27 ERA in eight starts. She was traded to another team in the league, the Maui Na Koa Ikaika, where in 2012 she posted better numbers: a 5.56 ERA but still 28 walks and 11 hit by pitches in 45.1 innings.

Still, she gained some very cool distinctions along the way. In 2010, she made a road start in Victoria, British Columbia, which made her the first woman to pitch professionally in three different countries. Talk about well-traveled. Her career was probably not as long as she had hoped, but Yoshida accomplished many terrific things along the way, likely inspiring girls to play baseball professionally like she did.

When Will a Woman Play in MLB? 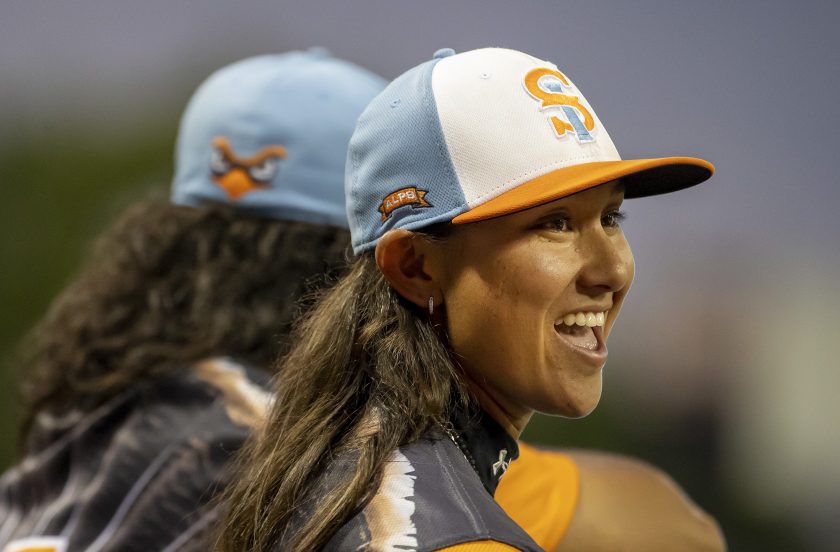 There's been a long history of women in baseball, from Mitchell to Borders to Yoshida. Most recently, that list includes Kelsie Whitmore, who this year became the first woman to be in a starting lineup and take the mound in the Atlantic League, an official MLB-partnered league.

Eventually a woman will play in the big leagues. It's only a matter of time. It might be hard to imagine a woman stepping in the box against someone like Max Scherzer or Aroldis Chapman, which is why I think this future trailblazer will have to be a pitcher.

It certainly would make sense for her to be a knuckleballer, too. The floating pitches require more form than velocity, and there have been plenty of men that parlayed their knuckleballs into lucrative careers. Wakefield won 200 games and two World Series. R.A. Dickey won the Cy Young award in 2012 with the New York Mets. Then there's Hall of Famers like Hoyt Wilhelm, Phil Niekro and Jesse Haines, plus other notable knuckleballers like Tom Candiotti, Charlie Hough, Joe Niekro, Steve Sparks and Wilbur Wood.

There's no reason to think a woman can't do the same. She might already be out there somewhere.

MORE: 10-Year-Old Girl's Baseball Swing is a Thing of Beauty