Jose Canseco is one of the most controversial figures in MLB history.

The former Oakland Athletics slugger was the first player in league history to hit 40 home runs and record 40 stolen bases in a single-season, creating the coveted 40-40 club.

Despite his heroics on the field, Canseco hasn't managed to maintain the vast fortune he acquired as a Major League Baseball player.

So, just how rich is Canseco now?

RELATED: Mark McGwire Cheated. What Happened to Him After Baseball?

Jose Canseco was born in Havana, Cuba to parents Jose Sr. and Barbara Canseco. The family relocated to Miami, Florida when he was a young boy. He also had a twin brother, Ozzie Canseco, who was a fellow professional big-leaguer, though his career was far less intriguing than that of Jose's.

Canseco attended Coral Park High School, where he excelled as a baseball player and earned his ticket to MLB.

He was drafted by the Oakland A's in the 1982 MLB Draft and became a star as soon as he reached the game's highest level. He won Rookie of the Year in 1986 and was the American League MVP in 1988.

Throughout his career, Canseco played for the likes of the A's, Texas Rangers, Boston Red Sox, New York Yankees, Toronto Blue Jays, Tampa Bay Devil Rays and Chicago White Sox, though was renowned for his power-fueled tenure with the Athletics.

The outfielder and designated hitter was one of the best power hitters in the league, earning six All-Star appearances, four Silver Slugger awards, one Most Valuable Player award and winning two World Series, one with the Athletics in 1989 and the other with the Yankees in 2000.

Canseco lost in two World Series' as well, falling to the Los Angeles Dodgers in 1988 and the Cincinnati Reds in 1990. In all, Canseco featured in 30 playoff games throughout his career.

While a member of the A's, the Cuban meat head Canseco and his teammate Mark McGwire became known as the Bash Brothers for their propensity to hit massive home runs.

Across his baseball career, Canseco hit 462 homers, drove in over 1,400 RBI and stole more than 200 bags, all the while maintaining a career batting average of .266. He was considered one of the best players of his era.

Jose Canseco's post-baseball career was highly controversial. The former slugger released a scandalous book titled "Juiced: Wild Times, Rampant Roids, Smash Hits and How Baseball Got Big" in which he claimed that multiple players in his era were openly using steroids, resulting in the massive power spike the league saw during the 80s and 90s.

The book made Canseco a lot of money, but at a significant cost. He alienated himself from his fellow big-leaguers and became somewhat of a public enemy among the sport, often being referred to as a rat or a snitch. 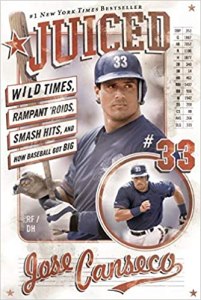 Jose Canseco has been married twice throughout his life.

His first marriage was to Esther Haddad, though they parted ways in 1992. He then married Jessica Canseco, nee Sekely, with whom he had a daughter, Josie.

Jose and Jessica split up in 2000. Josie Canseco is famous for dating YouTuber Logan Paul.

Check out this Cameo profile: https://t.co/8cpsmyk09m

Despite all of the money he hauled in as a big-leaguer, as well as his book deal and various television appearances, Canseco has struggled to keep a firm grasp on his wallet.

According to Celebrity Net Worth, Jose Canseco has an estimated net worth of just $500,000.

MORE: Sammy Sosa's Net Worth Proves Some Cheaters Do Win