Jose Canseco is one of the most infamous Major League Baseball players of all time. The six-time All-Star and two-time World Series champion became one half of Oakland Athletics' "Bash Brothers" alongside Mark McGwire. The slugger not only created the 40 home runs-40 steals club, but he went on to hit 462 home runs over his 17-year career.

Since retiring, the 56-year-old Cuban-American former MLB player has shown that he can't let go of the limelight. From ripping off the bandaid and revealing baseball's ugly scars during the Steroid Era in his book, Juiced, to accusing former Yankee Alex Rodriguez of cheating on Jennifer Lopez and even fighting a 7-foot man in an MMA fight and sparring in a Barstool Sports "Rough N' Rowdy" boxing match, Canseco's entire life is full of oddities.

What many may not remember about Canseco is that he married a Playboy model and then had a daughter who went on to pose for the famous publication as well. Now, his daughter is climbing the ranks in the modeling industry.

Who Is Josie Canseco?

RELATED: Jose Canseco's Net Worth: How Baseball (And His Book) Couldn't Save His Fortune

Josie Canseco is the daughter of Jose and Jessica Canseco. She's from Weston, Florida, and is half Cuban. She was born in 1996, when Jose was playing with the Boston Red Sox. He retired after the 2001 season.

Her modeling career under Next Model Management has taken her from Miami to New York City and Los Angeles. Since auditioning for the Sports Illustrated Swimsuit Issue in 2016, she's been featured in Playboy and worked the 2018 Victoria's Secret Fashion Show among other opportunities.

Despite the Victoria's Secret model's parents splitting in 2000 after just four years of marriage, Josie seems close to them still.

The girl who goes by "Jos" on Twitter has a tattoo of Jessica's name on the back of her neck. She's posted to her Instagram of almost 1.2 million followers numerous photos of her father. When she turned 21, she even got Jose drunk during her birthday bash.

Josie Canseco was 19 when she graced the pages of Playboy in 2016. Henrik Purienne shot her pictorial and she was named Playboy Playmate of the Month for June 2016.

While the daughter of the former MLB star didn't strip all the way down into her birthday suit, she did dawn an orange bikini in one set of photos and went topless while wearing nothing but white athletic socks in another. You can find more half-nude photos of her shoot here.

Josie also gave Playboy a glimpse as to who she was.

If it's one thing Josie Canseco has, it's straight up natural beauty. For her Playmate shoot, we kept it simple to match Josie's no makeup aesthetic. The 19-year-old though is anything but just a pretty face.

"I would love to own a dance studio for all ages where I can teach kids," she says. "After all, seeing my own family happy and healthy is always one thing that will make me happy in return."

Josie addressed how she wanted to become more than just the daughter of a famous baseball player.

"I'm so over people asking, 'Are you related to the baseball player?'" the American model told Playboy. "My family name has a lot of talk behind it. I believe one of my biggest achievements to date is maintaining my career and image through all the chaos."

Josie is clearly no longer the little girl fans of her father may remember her as.

She's dated some of the most high-profile celebs in the country. She went official with Brody Jenner, the son of Caitlyn Jenner and half-brother of Kendall Jenner and Kylie Jenner, in the summer of 2019 after Brody broke things off with Kaitlynn Carter. Josie and Brody weren't meant to be, however, as they stopped seeing each other and deleted pictures of each other off of social media accounts.

Now, Josie Canseco is dating YouTuber Logan Paul, who announced a fight with Floyd Mayweather, has more than 20 million subscribers and is worth nearly $20 million. She's even been featured in some of his videos. 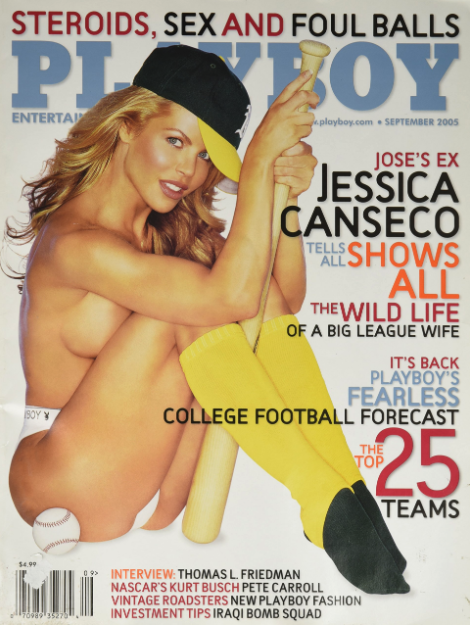 Josie got it from her mama.

Jessica posed for Playboy and was the cover model of the September 2005 issue. She graced the cover in Oakland A's attire and held a baseball bat. She also showed more skin in her pics than her daughter did.

"They were great to work for," she said in a 2006 interview. "I was a little nervous about it first because I had never done any nude shooting. The photographer was great."

Jose met his future wife while she was working as a Hooters waitress in Cleveland. Like her now ex-husband, she wrote a book about life with a baseball player titled Juicy: Confessions of a Former Baseball Wife.

Jessica also had a role in the TV show "Hollywood Exes." In 2016, she and Josie appeared on E! Online's "The Mother/Daughter Experiment: Celebrity Edition."

Holy cow look what someone just sent me... pic of me and my ex! Damn he was hot! We look like Ken and Barbie! haha pic.twitter.com/FVt8a9Q5

I'm not sure how many other mother-daughter combinations can say they both posed for Playboy. To have ties to someone like Jose Canseco makes this story even wilder.

Jose Canseco will always be one of the most interesting men in sports, including the NBA, NFL and UFC. Even his family is evidence of that.

This post was originally published on June 29, 2020 but has been updated.

MORE: Jose Canseco Fought a 7-Footer And Only Lasted 77 Seconds