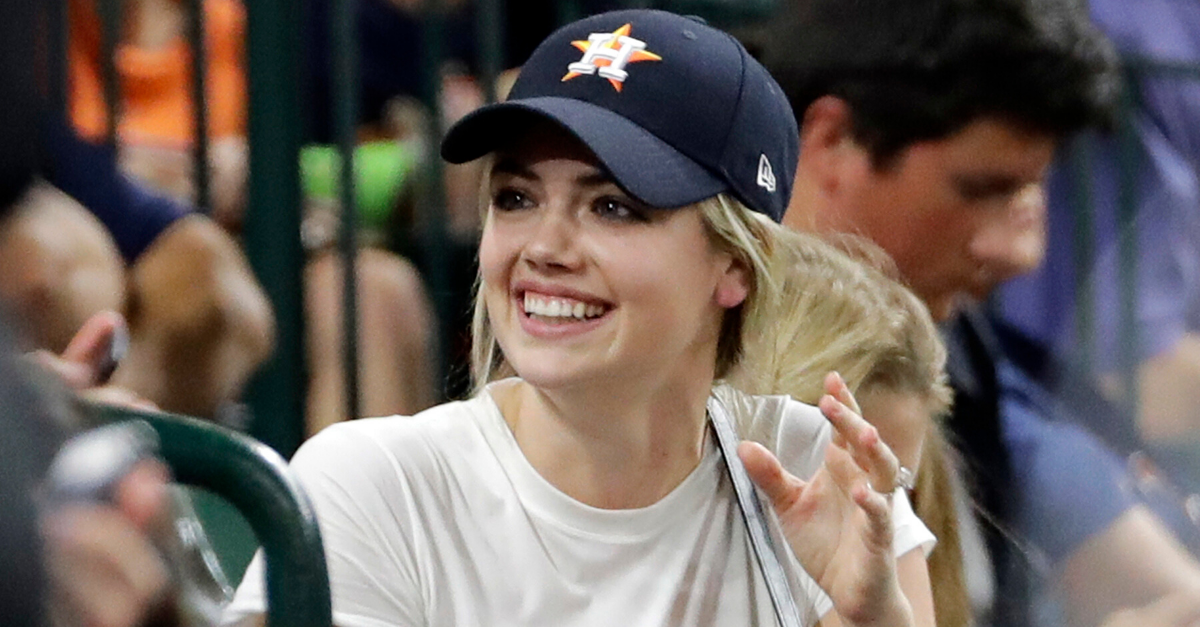 The bottom of the seventh inning in Game 6 of the 2019 World Series will go down in history as one of the most chaotic times in the MLB. A simple, routine play to first base suddenly turned into controversy and brought out the worst in social media, only for it really not to matter minutes later. It was complete madness, honestly, and one person in the middle of the firestorm was none other than model Kate Upton.

Upton, the wife of Houston Astros pitcher Justin Verlander, was on hand at Minute Maid Park to watch her husband throw in a crucial World Series game. It wasn?t perfect, by any means, but then the fateful seventh inning turned the sports world upside down for a short while.

Here?s what happened: With a runner on first and no outs, Washington Nationals shortstop Trae Turner hit a slow roller in the infield between home plate and the pitcher?s mound. Astros relief pitcher Brad Peacock picked it up and fired it over to first baseman Yuli Gurriel to try and get the out.

Although the ball escaped Gurriel, Turner was ruled out by the umpires and called for baserunner?s interference. That?s when everyone lost their damn mind Tuesday night.

The 7th inning of Game 6 of the World Series was absolutely ABSURD!

Here's everything that happened 👀 pic.twitter.com/Rx3w2y5HjP

At first glance, it looked like Turner did nothing wrong. He ran in a straight line to first base and the out wasn?t made. However, the ruling was much more technical and complex.

Turner was supposed to stay in the base path on the right side of the foul line. And since he didn?t, according to MLB rules, he?s out. Kate Upton knew it immediately and quickly sent out a tweet acknowledging the rule while the umpires reviewed the play.

?He wasn?t within the base path,? she posted. ?Those who don?t know the rule you HAVE to run inside the 2 lines. Not sure why the review is taking so long??

He wasn’t within the base path. Those who don’t know the rule you HAVE to run inside the 2 lines. Not sure why the review is taking so long… pic.twitter.com/SzUJTA4L70

The entire sports world waited, and then waited some more. Everyone was getting restless, but, ultimately, the call stood and Turner was ruled out.

. @MLB rule: "When running the last half of the way to first base while the ball is being fielded in the vicinity of first, a baserunner must stay within the three-foot runner's lane to the right of the foul line unless they are avoiding a player fielding a batted ball."

Of course, Nationals manager Dave Martinez lost his mind and was eventually ejected from the game between innings. Meanwhile, social media started blasting Upton to no end after the controversial call.

The controversial interference call drove fans wild, but Kate Upton was right the whole time. Yet, that didn?t stop a bunch of people from attacking her for not knowing the rules. Her tweet garnered thousands of comments and while some agreed with her, needless to say, others were far from kind.

Your bias is showing

You're in the minority here Kate. That's a terrible call.

Kate, I think you need glasses.

The comments came flooding in at a rapid rate, but the call stood. And at the end of the day, it didn?t matter.

As for Upton, well, she took it like a champ and even fired back at her critics.

I LOVE talking about sports and reading all of the dumb misogynist comments. It reminds me that women need to keep fighting for equality. It’s 2019 but feels like the 1950s. #feminist

?I LOVE talking sports and reading all of the dumb misogynist comments,? the supermodel later tweeted. ?It reminds me that women need to keep fighting for equality. It?s 2019 but feels like the 1950s. #feminist?

The only thing that makes it worse for the many social media bashers is that Upton was right, and they were completely wrong. Then again, she?s the only one of those critics who has been on the cover of Sports Illustrated.

What a weird time in MLB playoff history.