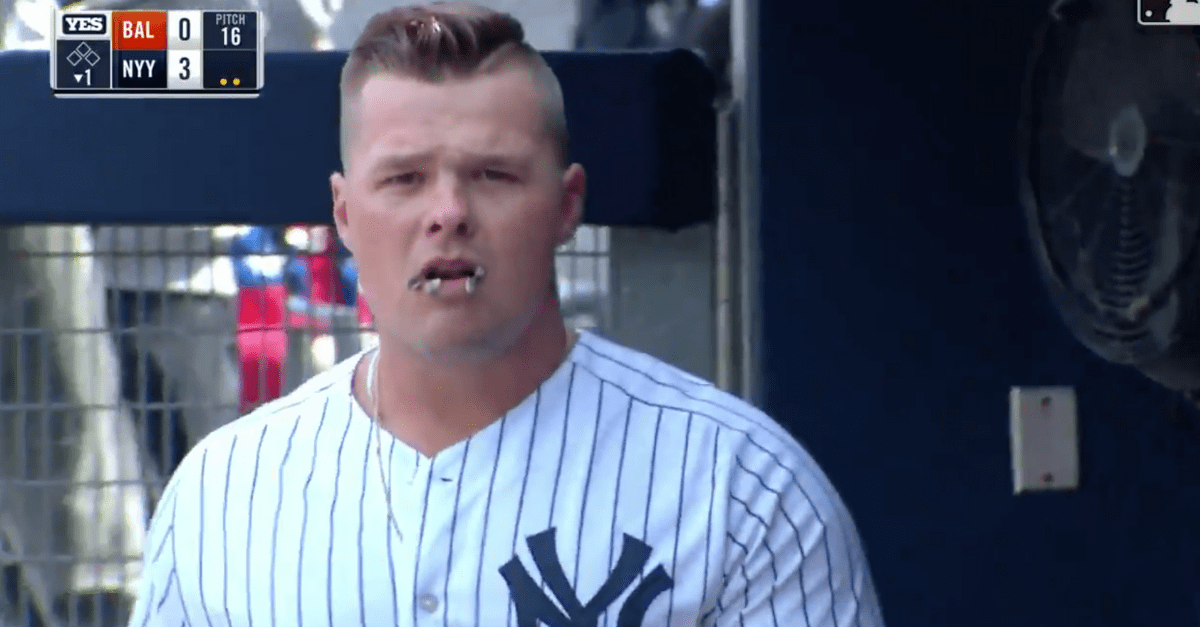 It?s baseball season, and you know what that means: Ballpark food, dingers, and hot moms dancing on jumbotrons are all back for a few months, and we should all buckle up for the wild ride known as Major League Baseball. However, New York Yankees slugger Luke Voit might need to calm down a little bit.

It?s only late March, but Voit already looks to be in midseason form at the plate. In the Yankees? 7-2 victory over the Baltimore Orioles on Opening Day, the 28-year-old designated hitter smashed a three-run home run in the bottom of the first inning and drew two walks.

On a 3-1 count, Voit cranked an Andrew Cashner breaking ball 418 feet to really get the party at Yankee Stadium started in 2019.

The blast was mesmerizing for the 6-foot-3, 225-pound Voit, who plays first base. He seemingly picked up right where he left off last year ? when he hit 14 home runs and drove in 33 runs for the Yankees after being traded from the St. Louis Cardinals ? and looks like he?s going to be a problem for MLB pitchers all season long, especially in the tough AL East.

Seriously, Luke Voit. WHAT IS THIS?

Luke Voit's approach to eating seeds leaves a lot to be desired…. pic.twitter.com/OnaxzHz4b1

RELATED: Prepare to Cringe When You See Why This Umpire Paused the Yankees Game

There is no real correct way to eat some delicious David Sunflower Seeds.

Some people eat them one at a time. Others take massive wads and load up one cheek up. Both are universally accepted in the seed-eating world. What Voit does, though, is awful in every way.

What kind of monster loads up on seeds, only to see the majority of them fall out of their mouth within a couple of seconds?

Luckily, Luke Voit has this whole baseball thing going for him because this is just unacceptable.

In 258 career plate appearances, Voit is batting .291 with 75 hits, 20 home runs, 49 runs scored and 58 RBIs. Chances are those numbers are going to skyrocket this year. Let?s just hope Aaron Judge, Giancarlo Stanton or someone else in the Bronx teaches the first baseman how to properly eat sunflower seeds at a baseball at some point during the regular season.

READ MORE: MLB Vet Smashed a Clubhouse TV Because He Hates Fortnite Like Most Parents